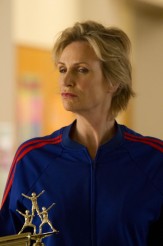 A potentially great message episode is ruined by its ultimate message 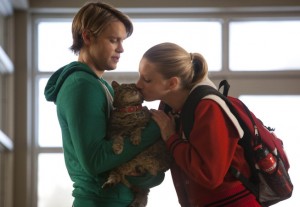 I wasn’t sure what to think when GLEE decided to tackle school violence and kids bringing guns to school. It’s a very tricky topic, if handled poorly could totally fail miserably. If handled properly, it might shine some light on recent events that has been all over the news in the last couple of years. Unfortunately, “Shooting Star” eclipses being a great episode by its pay-off which is not only irresponsible, but completely wrong.

When you’re trying to do a “message” episode of TV, there are some responsibilities you have to your viewers, particularly your younger viewers who may not understand the varying shades of grey that life presents. There have to be consequences, and one of the actions of the characters in this show does something so totally wrong (even if it was meant in a sincere way), that it sends mixed signals about how to handle people who are having serious mental issues.

The episode begins with Brittany (Heather Morris) warning of an impending asteroid heading toward earth, so the rest of the Glee club begin to act as if this is the end of the world and make amends or tell people how they really feel about each other.

Of course, a real threat occurs when gun shots go off at the school. It sends everyone into a panic, and, for about fifteen minutes, GLEE provides what could very well be some of its best writing and directing.

The drama plays primarily in the music room, dealing with the students and Mr. Schue (Matthew Morrison) locking the doors and keeping quiet in order to avoid the shooter coming their way. The threat and the potential of a threat to our key cast is handled quite well. And while there is no physical violence that we see, it’s what is implied that makes it real. And then there’s the scene in the girl’s bathroom with Heather that’s just as horrifying.

When the police arrive and the school is cleared (no one was hurt), the gunman and the gun disappear. As the police question every student and go through every locker, Sue (Jane Lynch) steps up to take the fall for the shooting. It was her gun that she kept hidden in her safe. It discharged by accident.

The explanation seems a bit pat, especially when she gives herself up to the Principal, and of course it is too pat. Sue is covering for her Down’s Syndrome Cheerio Becky (Lauren Potter).

It seems clear at first that Becky is “Katie”, the girl who has been chatting and catfishing with Ryder (Blake Jenner), but who he hasn’t met. When he pressures Katie to reveal herself, that’s when it appears Becky snapped and brought a gun to school for protection. Of course, there is no concrete evidence Becky is “Katie” because the show is likely to drag out this mystery for longer that it should, but it’s a terrible bit of misdirection if that is the case. And the fact that a cell phone went off in one of the Glee clubs bags when Ryder called the number during the lockdown, it’s likely “Katie” is someone in Glee club.

As for Becky, while explaining to Sue her fears about graduating and not feeling safe in the big world, she brought her family’s gun to school and it goes off. Sue covers the whole thing up and takes the fall.

So here’s where my big problem with this is. Mental illness, is a mental illness. Bad choices, are bad choices. Plain and simple. However, right or wrong, you have to be accountable for your actions. And as some of these other shootings have proven, the people who have harmed others, need serious help. If you knew someone was stupid enough to bring a gun to school, would you cover up for them in the world we live in today? Now that you’ve taken the fall, and are fired from the school (like Sue is), who is going to be there the next time the gun is brought to school by this same person. Who gets hurt then? Who is really responsible? Sue tried to help Becky, but how can she help her when she’s not at the school anymore? Didn’t she do more harm that good? Ugh!

I get that GLEE is trying to make a statement and trying to do an episode about school violence without showing anyone getting killed or hurt, but this is really the wrong message to be sending out. If Becky is going to be the one coming to school with a gun, she needs to be handled properly. Otherwise, it sends a message to viewers, and impressionable kids that if you do something that wrong-headed, that there are no consequences, “the adults will cover for you.”

Man, this episode pisses me off so much. Like much of GLEE, it can do so many things right, yet when it does something wrong, it does it on an epic scale.

So, for the drama and sheer scariness of an incident like this, the show gets incredible props. For the writing of the aftermath, it’s an epic fail in so many ways, I don’t understand why no one in the writer’s room saw what a bad decision this was to begin with.

GLEE can be a great show, and I get the intent here, but it just doesn’t work. For all the drama it mines from a simple concept, it can’t disguise the fact that its message is lost among faulty logic and instead it portrays the wrong message.

Now, maybe this won’t be the end of this story thread, and there will be more drama ahead, but there’s no redemption here. Once Sue took the fall for another student and let that student still walk the halls, it crossed a line, a very big line, that will be hard to come back from.

So sad too, because this could have been one of the greatest hours on television all year.

Grade: A (for its intense fifteen minutes of the school under siege and how it shows the students and faculty dealing with tragedy)

Grade: F (for the terrible message it sends at the resolution of the episode)