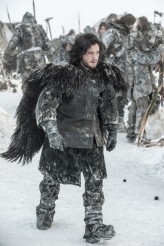 A fantastic season premiere of a wonderful series 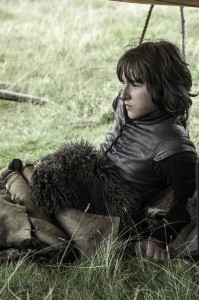 If you hadn’t realized how much you’ve missed GAME OF THRONES during its long hiatus, rest assured that “Valar Dohaeris” will remind you what a truly splendid show this is. Even though the episode has more set-ups than actual clashes, we are immediately drawn right back in to the ongoing events in Westeros and Essos.

Beyond the Wall, the forces of the Night’s Watch retreat from an onslaught of undead wights and their commanders, the Others.

Jon Snow (Kit Harington), pretending to have deserted the Night’s Watch in order to infiltrate the forces of the King Beyond the Wall, Mance Rayder (Ciaran Hinds), once a man of the Night’s Watch himself. When Jon says truthfully that he saw his commander let the wildling Craster give his infant son to the Others and that it disgusted him (though in reality, not enough to make Jon quit the Watch), Mance believes Jon wants to join Mance’s army.

In King’s Landing, having successfully defended the city against the army of Stannis Baratheon (Stephen Dillane), Tywin Lannister (Charles Dance) is now the Hand of his grandson, King Joffrey (Jack Gleeson). Tywin’s younger son Tyrion (Peter Dinklage, who rightly won an Emmy for his first year in the role), was wounded in the battle that was won by his tactics. He’s been set aside as Hand of the King. This is fine by Tyrion, who by rights ought to inherit the Lannister family home of Caesterly Rock, as elder brother Jaime (Nicolaj Coster-Waldau) long since joined the Kingsguard and cannot marry or hold lands. However, when Tyrion asks for his birthright, he is brutally dismissed by his father, who has no intention of leaving anything to his dwarf youngest son.

Tywin’s daughter Cersei (Lena Headey), the Queen, is quietly freaking out about her future daughter-in-law Margaery Tyrell’s (Natalie Dormer) apparent habit of giving to the poor. Cersei is also none too happy that her oldest son, young King Joffrey (Jack Gleeson), seems to side with his bride-to-be in disputes.

Daenerys’ three dragons are now about the size of German shepherd dogs. They accompany her and Ser Jorah Marmont (Iain Glen) and their small band of Dothraki to Slaver’s Bay in Astapor, where Daenerys is offered an army of 8,000 Unsullied soldiers, eunuchs trained from boyhood, whose loyalty must be proved by having them kill a slave infant in its mother’s arms. Daenerys is understandably reluctant to give money to anybody who endorses this training method, but knows she needs skilled and loyal fighters. Daenerys is also rescued from a cute little girl who turns out to be an assassin by Ser Barristan Selmy (Ian McElhinney), a famous knight who was lately dismissed by Cersei and almost killed by her men. He now genuinely wishes to help Daenerys regain the Iron Throne.

Davos Seaworth (Liam Cunningham) didn’t die in theBattleof the Blackwater after all. He is rescued from a cave in an ocean rock and brought back to Stannis. Davos almost immediately clashes with Stannis’ priestess/sorceress Melisandre (Carice van Houten), who has been burning captives alive as sacrifice to her god. The argument winds up getting Davos arrested.

As usual, there’s so much and more going on that it’s enough to make one’s head spin, but it’s all pretty glorious. The production design alone is enough to cause swoons, but it’s all in the service of making us believe this is a real world we’re seeing.

However, the drama is knockout. The scene between Tyrion and Tywin is the stuff of Emmys and, more to the point, long-lasting memories – the pain and the fury in both characters is unforgettable, the performances likewise.

It’s also great to see Cersei and Joffrey disconcerted by Margaery, as they can’t abuse or insult her (they need her father’s goodwill for the marriage and the subsequent dowry), with Headey and Gleeson both finding a host of nuances Dormer’s performance is equally skillful, playing it wide-eyed and kind-hearted, but not so much that we forget she’s no slouch when it comes to the game of thrones either (let’s recall the wonderful sequence with her previous husband, the late Lord Renly where Margaery calmly offered to bring her brother into the marriage bed if it would help Renly perform enough to produce an heir).

Cunningham is a powerful performer and Davos is a deeply sympathetic character, so it’s good to know he’s still with us, and Clarke has a magical presence as Daenerys. The flying and diving dragons look fine.

GAME OF THRONES is an immersive experience. Watch and play.