A little less devastating than last week, as Episode 10 soars to a climax on dragon wings 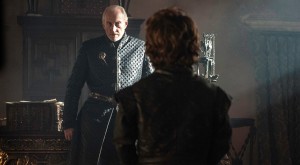 It doesn’t necessarily go without saying that the GAME OF THRONES Season 3 finale “Mhysa” is less devastating than last week’s “The Rains of Castamere” – in this story, anything can happen – but there are a few moments to lift our hearts. Arya (Maisie Williams) gets to wreak some proper gory vengeance on one of the men responsible for what happened to her mother and eldest brother, Sam (John Bradley) and Gilly (Hannah Murray) make it safely back to Castle Black and Daenerys (Emilia Clarke) is embraced as the mother – “Mhysa” in the local language – by the slaves she has freed at Yunkai.

Arya and Sandor Clegane (Rory McCann) see the travesty that has been wrought after the massacre under Walder Frey’s (David Bradley) roof – the head of Robb’s direwolf Grey Wind has been sewn onto Robb’s body. When Arya hears a group of men on the road bragging about creating this thing, she steals Sandor’s dagger and stabs one of the men to death, while Sandor fights and kills the rest. One would have to be a pacifist supreme to begrudge Arya this deed, and Williams has such fierce determination that we don’t doubt Arya will do whatever she intends or die trying.

Walder Frey gloats to Roose Bolton (Michael McElhatton) about their betrayal of the Starks and how they’ll be rewarded by Tywin Lannister (Charles Dance).

Meanwhile, Bran Stark (Isaac Hempstead-Wright) tells his companions Meera (Ellie Kendrick) and Jojen (Thomas Sangster) a story of the Rat Cook, a cautionary tale about betraying one’s guests. (Being turned into a giant white rat that’s always hungry seems far too good for Walder Frey, but that’s another story.) Then they hear something coming up out of the well in the darkness – that turns out to be Sam and Gilly. Sam figures out that Bran is Jon Snow’s (Kit Harington) brother based on the presence of his direwolf. Bran insists that he must keep going north.

Jon is confronted by his anguished lover Ygritte (Rose Leslie). He says he loves her but that she’s always known he was true to the Night’s Watch at heart. Ygritte shoots arrows at Jon, hitting him three times, but he manages to ride away and is still alive when he reaches the Watch.

Sam takes Gilly and her child to Maester Aemon (Peter Vaughan), who offers Gilly sanctuary – and accepts Sam’s honest explanation that he’s not the baby’s father, even though Gilly wants to name the baby Sam.

Ser Davos (Liam Cunningham) reads the message Maester Aemon has sent to all the lords of Westeros, begging for help against the coming White Walkers and Others. Unwilling to let Melisandre (Carice van Houten) sacrifice Gendry (Joe Dempsie) to the Red God, Davos sets Gendry free in a rowboat. Stannis (Stephen Dillane) is furious and sentences Davos to death, but Melisandre surprisingly agrees with Davos that Stannis needs him to much to dispose of him. Melisandre sees the threat in the North as much more serious than the claim to the Iron Throne, and Stannis accordingly plans to head to aid the Night’s Watch.

In King’s Landing, Lord Varys (Conleth Hill) tries to bribe Shae (Sibel Kekilli) to leave her lover Tyrion (Peter Dinklage), saying that Tyrion is one of the few people with any hope of keeping the kingdom from ruin, and Shae is a distraction. Shae turns down the diamonds.

Tyrion and his new wife Sansa (Sophie Turner) enjoy a brief moment of shared humor before the news of the slaughter of Sansa’s brother and mother arrives. King Joffrey (Jack Gleeson) wants to torment Sansa by serving her Robb’s head at Joffrey’s wedding, which prompts a threat from Tyrion. Joffrey goes too far when he insults his grandfather Tywin (Charles Dance), who essentially then tells Joffrey it’s time to take a nap. Alone with Tyrion, Tywin insists that Tyrion impregnate Sansa, even if it means raping her. Tyrion is resistant.

Jaime (Nicolaj Coster-Waldau) returns to King’s Landing, unheralded and unrecognized, with Brienne (Gwendoline Christie). When Jaime goes to see his sister/lover Cersei (Lena Headey), she is shocked and Jaime is shamed by the absence of his sword hand.

In Yunkai, the freed slaves proclaim Daenerys Targaryen (Emilia Clarke) as their mother, or “Mhysa.” They hoist the young queen onto their shoulders as her dragons fly and the season ends.

We can always count on the Lannisters for great drama. There’s an affecting scene where Cersei tells Tyrion sincerely that when Joffrey was little, he made her happy, and even Joffrey cannot take the memories away. Of course, anyone giving Joffrey grief – whether Tyrion or Tywin – is cause for rejoicing. Gleeson is brilliantly monstrous as the young king.

Davos is moving to the fore of the series heroes – let’s hope this doesn’t portend his loss – with Cunningham playing him as blunt and decent as they come. It’s hard to warm up to Stannis and Melisandre, but the characters continue to surprise us.

Bradley as Sam is so likable that we could probably watch half an hour of him feeding Maester Aemon’s messenger crows, but it’s even better that he’s given some important plot points (like how to kill a White Walker) to handle.

As for the Bradley who plays Walder Frey, the character is so reprehensible and Bradley portrays him with such glee that we want to see more of him in the hope that we’ll see a comeuppance approaching.

Obvious care was put into the final shot/effect, as we see Daenerys in the center of the worshipful Yunkai, with the camera pulling back and back until Daenerys is but a pinprick within the huge crowd as her dragons soar triumphant overhead. She’s a great character and we love her for her integrity (and her looks and her dragons).

If “Mhysa” doesn’t carry the kick to the gut of the previous episode “The Rains of Castamere,” it’s because almost nothing could. “Mhysa” allows us to recover our bearings and take stock of the story and the characters, moving things forward and creating some hopeful situations (Gendry’s rescue, Arya’s vengeance, Daenerys’ triumph) so that the whole enterprise doesn’t seem impossibly bleak. At the same time, we are in great suspense, as we know terrible things can happen, so the stakes seem as high as they can be.

It’s also a blessing that the season takes its leave on a note of some sort of conclusion, so we don’t feel that, as an audience, we’ve been left up a tree for the next year. It is a pretty bleak thought that we have to wait another forty-two weeks for the next installment of GAME OF THRONES, but if ever a show has proved worthy of our patience, it’s this one.

Related: TV Review: GAME OF THRONES – Season 3 – “The Bear and the Maiden Fair”

Related: TV Review: GAME OF THRONES – Season 3 – “And Now His Watch Is Ended”