The city of Charleston takes sniper fire from a group of Americans who don’t recognize its status of the capital of a post alien invasion America. 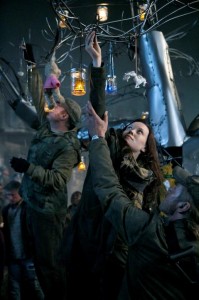 Even though it’s still early in its third season, FALLING SKIES made the somewhat bold decision to give us a completely alien-free episode this week, and the results were not terrible.  Whether this was a decision based on budgetary constraints, or its creators made a strategic decision that the show needed to spend more time building up its woefully underdeveloped human characters, it’s a decision I support.  But, ultimately, “Badlands” still felt clunky, and that support comes with many reservations.

The episode begins with the men and women (and kids) of the 2nd Mass pulling guard duty around the perimeter of Charleston, America’s makeshift, post-apocalypse capital.  Their light-hearted banter is interrupted when they start taking sniper fire from a group of unknown assailants who turn out to be human, and whose motivations are unknown.  This leads to a pretty grisly turn of events, when a bullet that hits “Crazy Lee,” (a character I honestly did not remember from prior seasons).  The bullet itself is the least of Crazy Lee’s worries, however, as her flak jacket absorbs that pretty well.  The fact that the bullet knocked her backwards onto an exposed piece of rebar which pierces all the way through her skull (mercifully off-screen, and devoid of sound effects) is the real problem.  Eerily, she continues to talk to her compatriots, Pope (Colin Cunningham) and Matt (Maxim Knight), as they use a hacksaw to saw through the rebar, since the brain damage is such that she doesn’t feel pain, but also no longer has vision.

Meanwhile, the 2nd Mass captures one of their assailants, who will only give her name, rank and serial number.  Her name is Katherine, and she is ostensibly an agent of America’s “true” government.  She says that she represents America’s actual President, “Benjamin Hathaway,” and that Tom Mason (Noah Wyle) doesn’t actually get to claim the title of President for himself.  Tom intuits that she’s upset with the presence of both Skitters and the Volm inside Charleston and must assume that the humans in the city are collaborating with the alien enemy.  He tries to reassure her that those aliens are their allies, but clearly she’s not open to that bit of nuance.  Also, everyone seems to know who “Benjamin Hathaway” is, so I’m going to assume he was the pre-invasion President.  No one is convinced that she’s telling the truth about the survival of America’s original government, however.

“Badlands” also goes another round with Hal Mason (Drew Roy) flagellating himself for possibly being under alien control and wanting to leave Charleston because he must be the mole who’s secretly been providing information to the Espheni enemy.  His girlfriend, Maggie (Sarah Sanguin Carter) doesn’t want him to leave. Also, the wheelchair thing is history.  Apparently Hal can walk now.  This was the least effective storyline this week.  If memory serves, Hal is not the first member of the Mason family to want to leave the group because he suspects he might be under alien control.  I also suspect that he will not be the last, unfortunately.  FALLING SKIES can’t seem to get enough of these “traitors in our midst” storylines, and they really don’t have much else to do with the otherwise dull Mason sons these days.

Probably the most interesting thing about “Badlands” is Anne (Moon Bloodgood) and her concern with her newborn baby Alexis’s strange behavior.  Thanks to some CGI, Alexis is quickly becoming a slightly less creepy version of the E-Trade baby, and says things like “Don’t” as Anne takes a sample of the her blood in order to test her suspicions that there’s something wrong with her child.  Alexis is nowhere near developmentally advanced enough to be saying words or standing up and staring at Anne, and Anne’s understandably unnerved when all this starts happening.  After telling her assistant Lourdes (Seychelle Gabriel) what she’s observed, she assures her that these are only hallucinations.  Lourdes then tells Tom about what Anne’s experiencing, and that she believes Anne is suffering from post-partum depression or post-partum psychosis.  As a result, Tom goes to Anne and vows to be more present in her life.  Anne gets what he’s up to and denies being “crazy.”  She saw what she saw.  Tom thinks the psychological toll of two years of fighting to survive an alien genocide are to blame, and he doesn’t want Anne to let the aliens take her sanity along with everything else they’ve taken from them.

I like this storyline but I have a bad feeling about it.  I want Tom’s explanation to be correct, but am under no illusions that FALLING SKIES would ever go in that direction.  For my money, a character suffering from a post-partum chemical imbalance and still trying to protect her baby during a war with aliens would be more dramatic than introducing a baby that’s some kind of human-alien hybrid, (a plotline that’s a dime a dozen on Sci-Fi TV shows, and is undoubtedly the one they will go with).   The teaser for next week’s show seems to confirm this.  As with last week’s episodes, throwing more creatures and Sci-Fi gobbledygook at the screen isn’t really what this show needs, however, and my expectations for baby Alexis’s future entertainment values are tempered with caution.

Meanwhile, “Crazy Lee” dies and Pope lays into Tom, claiming, calmly and rationally, that his decision to put Pope’s unit of “Berserkers” out on endless patrol in order to provide a defensive barrier for whatever the untrustworthy Volm are building in Charleston is what led to Lee’s death.  Tom just says, “You’re right” and walks away, and then goes to do what he usually does in these moments:  Speechifying!

In the finale, Tom’s canned speech to the assembled Charlestonians (which actually starts with the words “Bill Clinton once said…”) gets tossed aside in favor of a more heartfelt, impromptu pep talk about how “every one of us matters.”  I’m not sure how this addresses Pope’s point that Crazy Lee died to defend a dubious master plan involving collaboration with aliens whose intentions can’t be known, (which seemed to be the thing that motivated this speech in the first place), but either way, we get another speech from Tom.  The problem with this speech is that, from the perspective of a viewer watching drab fictional characters fight off a fictional alien invasion; every one of them decidedly does not matter.  Especially “Crazy Lee.”  The extent of my investment in her character comes from the fact that I’d never seen anyone on a TV show die from having rebar jammed through his or her head before.  Unless you can make me interested in these people for things beyond the method of their deaths, however, I’m really not interested in any attempt to tug at my heartstrings on their behalf.  And it doesn’t make it more effective if you bring in a group of angel-voiced choirboys (which they actually did) to wring more emotion out of these moments, either.

On some level it’s possible FALLING SKIES’ creators might have shared my opinion of this week’s Tom Mason speech, though, because at its conclusion the choirboys are interrupted by alien spaceships attacking.  This was a solid decision.  “Badlands” didn’t really earn the warm and fuzzy note it had threatened to end on, so, by all means, let’s blow some stuff up.