doctor who christmas special review the time of the doctor

TV Review: DOCTOR WHO Christmas Special – “The Time of the Doctor” 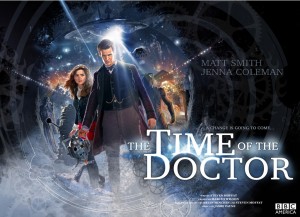 Well, it’s the holiday season and we have to have a Christmas Special from DOCTOR WHO, which also often means that someone is going to die. There’s a bit of a history starting with Russell T. Davies run on WHO, of having sad Christmas episodes, and the latest offering “The Time of the Doctor” is certainly no exception.

“Time” is the final part of the “of the Doctor” named episodes, and I really wasn’t sure if Steven Moffat and his team were going to be able to top the 50th Anniversary Special, “The Day of the Doctor”.  Sure this one didn’t have David Tennant returning as the 10th Doctor, but Moffat wisely chose to run forward with the formula he’s been using on WHO for the last few series, and just focuses on getting his story of the 11th Doctor (Matt Smith) told and tries to tie up as MANY of the loose ends that have been dangling for the better part of these last few years as well.

At the end of the last series we were treated to a rather bleak outlook for the future of the Doctor, his tomb and last resting place on a planet called Trenzalore. It is this tomb which enabled The Great Intelligence to enter the Doctor’s personal timestream and erase him from existence, it’s also how Clara Oswin (Jenna Coleman) is able to enter the Doctor’s timestream, encountering multiple versions of him, and ultimately saving his life and his existence.

So, it should come as no surprise to anyone that this new episode would take place on Trenzalore in a town called Christmas. Which is neither here nor there, it just really serves as a plot device to make this a bonafide Christmas themed episode.

The 11th Doctor is faced with his final hour in this episode, which also confirms that the 13 Doctors were able to save Gallifrey (home world of the Timelord race) and deposit it into a pocket universe. Many questions from the last few years are answered such as: what made the TARDIS explode, who are the Silence, why does the “silence need to fall”, and how can the Doctor regenerate beyond his 11th incarnation when he’s used up all of his lives?

Of course the Daleks, Cybermen, Silence, Weeping Angels, and even Sontarans are thrown into the mix of baddies in this story that actually takes place over hundreds of years. All of them just seem to be there for some one-off battles or encounters, and none of them really reaches the potential we’ve seen from these races in the past. Having said that, there is a nifty Cyberman head nicknamed “Handles” that the Doctor packs around for a good part of the episode that really has a somewhat touching “death” scene.

Matt Smith and Jenna Coleman turn in some of their best performances and the fact that Smith was wigged for this episode is even incorporated into the plot (which I honestly thought was kind of brilliant). There’s plenty of clever humor, and when the 11th Doctor bids farewell, there’s not a dry eye. The scene was really well done with true emotion coming out of both actors, and the surprise guest appearance just as the 11th “dies” is the emotional lever that probably pushed the entire viewing audience into groaning sobs. At least, I know it did it for me.

Orla Brady joins the cast this time around as a kick ass space nun called Tasha Lem, who has hooked up with the Doctor at some point in his past, and the fact that her church can only be attended naked, puts some really clever plot devices into play. Brady is someone that I would love to see again, and her character would definitely be worth bringing back.

The VFX are top notch as usual on WHO, and there’s some really fantastic prosthetic make-ups on Matt Smith as the Doctor ages 300 more years. I like the fact that as the Doctor ages he ends up looking more and more like the 1st Doctor, William Hartnell.

Of course, this entire episode leads up to Peter Capaldi taking the reins as the 12th (or is it 13th at this point?) Doctor. His appearance is somewhat typical of a Doctor regeneration, some bizarre line about the new body, this time it’s kidneys he notices, and then into the mayhem of crashing. Of course, this Doctor for some reason has no idea how to fly the TARDIS, which might pose some problems at first, but he clearly gets it worked out; as we saw his brief cameo in “Day of the Doctor.” Honestly there’s not enough to make any kind of judgment call on Capaldi’s Doctor, but I am looking forward to the show coming back in the fall (yes that far away).

So for now kiddies, content yourself with WHO on Blu-ray, Netflix, and HuluPlus. Of course, there are new audio adventures releases all the time from Big Finish Productions, and they are all cannon now thanks to the lines spoken by Paul McGann in the 50th mini-episode, so it can’t hurt to bone up on all of the different Doctors’ many audio adventures.