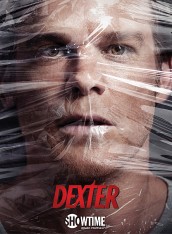 A dark, gripping start to the season 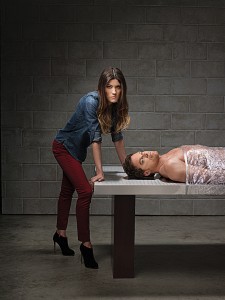 In story time, six months have passed since the “Holy !!!!” climax of DEXTER’s seventh season. The eighth and (sob) final season doesn’t start with anything quite so shocking as Deb (Jennifer Carpenter) shooting LaGuerta (Lauren Velez) in order to save Dexter (Michael C. Hall). In fact, “A Beautiful Day” opens with a montage of our protagonist and his son Harrison enjoying sports in the park, set to a guitar instrumental of “What a Wonderful World,” as Dex tells us how he has coached his son’s team to victory and gotten the bowling league back together.

Deb, however, has totally come apart. She’s now a private eye working for a security firm, she’s involved with Andrew Briggs (Rhys Coiro), one of the criminals she’s investigating, she’s drinking, snorting, and hating herself beyond measure. When a very worried Dex tracks Deb down to check on her, Deb orders him to leave, saying she shot the wrong person. Dex persists and finds that a man Deb believes to be a fence is actually a hitman, coming to murder Deb’s new hookup Briggs – and Deb as well if she’s with Briggs at the time. Dex tries to protect Deb, but Briggs misinterprets, attacks Dex, and Dex reflexively stabs him to death. Deb, disgusted and furious, protects Dex once again, calling 911 but saying her friend was already dead when she arrived.

So Dex and Deb are at an emotional place they’ve never been before with one another, with Deb in an apparently endless dark night of the soul that prevents her from reaching out for help to the one person who knows her and Dex at last starting to realize how truly damaging he is for those around him.

And that’s not the only big news here. There’s a new serial killer in Miami (isn’t there always) who removes the part of the victim’s brain that controls empathy. Tom Matthews (Geoff Pierson) is in charge again, with Batista (David Zayas) as the new lieutenant – LaGuerta’s murder (of course, Batista doesn’t know who’s really responsible) has made him want to “catch bad guys” again. Matthews has accepted the assistance of Dr. Evelyn Vogel (Charlotte Rampling), a renowned psychiatrist who specialized in serial killers.

Dr. Vogel, who has volunteered for this gig, proves very knowledgeable. Alone with Dex, she first hands him a set of disturbed and disturbing crayon drawings that he made as a child, then mentions that she knows about Harry’s code. 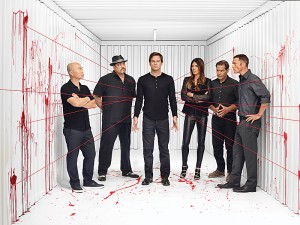 This makes “A Beautiful Day” an enormous one-two punch. The existence and revelations of Dr. Vogel are surprising but not unthinkable – indeed, it makes sense that (as implied) Harry would have consulted with a professional about his adopted son’s issues. Rampling has such a magnetic, knowing presence that it’s easy to believe her Vogel is someone who could keep those sorts of secrets for such a long time.

The real blow here is seeing Deb in such pain and seeing the once-invincible sibling bond between her and Dex in ruins. Carpenter conveys fury and self-loathing anguish in ways so convincing that we almost hurt from it physically. No wonder Dexter, so powerful in his own domain, wilts before her. It is startling to us as well as to Dex to have it rammed home that this is the first time he’s really considered that Deb isn’t like him, not because she won’t understand him, but because things that barely resonate with him (like murder) have undone her.

It’s a relief to see Batista, played by the ever-reliable Zayas, back on the force, even (or maybe especially) because his reaction to finding evidence against Dex and Deb in LaGuerta’s belongings is to see it as further proof of LaGuerta’s unreasonable obsession. It should also be interesting having the slimy Matthews, portrayed so well by Pierson, back to gum up the works.

This is a dark beginning, and with this as the final season, there may be no light at the end of this tunnel, but it promises to be a riveting journey.