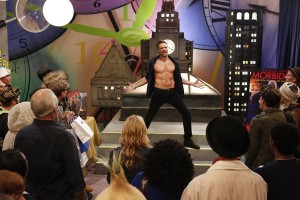 I keep coming back to the reconstituted COMMUNITY without creator Dan Harmon at the helm, and the third week in, and I’m still not sold that this is the same show I once loved.

COMMUNITY created its own DOCTOR WHO-like show within the show called INSPECTOR SPACETIME which has slowly become a major player in the actual show.

Naturally, the new showrunners thought it would be amusing to send the community characters to an INSPECTOR SPACETIME convention and, well, it’s about as successful as the Fox comedy series BREAKING IN sending its characters to Comic-Con. If you’ve experienced any kind of “con”, trying to capture the craziness of it on a TV series will always end in an epic fail.

The plotline has Abed (Danny Pudi) and Troy (Donald Glover) attending an INSPECTOR SPACETIME convention just as the relationship between Troy and Britta (Gillian Jacobs) is heating up. A riff in the Troy/Abed relationship is inevitable and gets sorted out during this uneven half hour.

Meanwhile, Jeff (Joel McHale) wants nothing to do with the convention even though he resembles one of SPACETIME’s biggest villains Thoraxin and Annie (Alison Brie) pretends to be Jeff’s wife, for reasons that boggle the mind and only exist in a sitcom that isn’t COMMUNITY.

Both Shirley (Yvette Nicole Brown) and Pierce (Chevy Chase) are once again wasted (and sort of forgotten about), as they end up in a focus-testing group at the convention determining what an American version of INSPECTOR SPACETIME should be.

The problems with COMMUNITY are many at this dire stage of its life (and too numerous to go into without getting massively depressed). The short version though is the show is trying to be conventional and unconventional at the same time, but fails at both. The relationship between Troy and Britta is a perfect example. It was much more touching and workable last season than it is this year. Now, it just feels like a forced unrealistic coupling rather than anything organic.

Still, the show offered up a pretty clever sight gag during its pre-title sequence of Britta escaping out of Troy’s bedroom, so the episode gets a small bump for that inventive bit.

I wish there were more positives in this sorry excuse for an episode. Aside from a couple of amusing little sidebars about convention-going, COMMUNITY misses the mark again.

The cast is still great, the writing not so much and the words coming out of the character’s mouths feel like an alternate world COMMUNITY where everything looks the same, but isn’t.

I still like the cast though, and still want to believe in the show, but I’m not laughing anymore and that to me is the most disappointing part of watching the creative life slowly being sucked out of what was once a brilliant show.