beauty and the beast review hothead

Vincent a Fireman - a doctor - Soldier and Beast! What else will we find out about him? 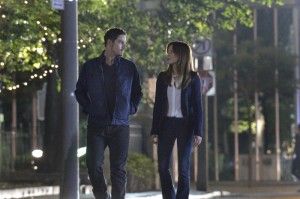 Katherine  (Kristin Kreuk) is having such a bad time of it with everything that is going on, she can’t live with all the lies anymore on BEAUTY AND THE BEAST. All she wants to do is go out and have some fun. This is how the episode “Hothead” starts. Tess (Nina Lisandrello) and Katherine head to a bar to have some drinks and play pool, but the night is ruined when some drunk guy named Colin tries to pick her up and no matter what she tells him he won’t stop…even when Tess tells him they are cops…so when he tries to get a hug from her she shoves him down as all the patrons at the bar look on. On top of that she hits this girl in the face who is a friend of his and then turns and hits a Federal Judge, that was an accident. Of course, both her and Tess are arrested, but Gabe (Sendhil Ramamurthy) comes to the rescue.

Like Tess keeps saying to Gabe, I am convinced that Gabe has a thing for Katherine, although he keeps writing it off to he is trying to win her trust back and that she saved his life from being a beast and he owes her. Right! I am kind of hoping that it turns out that Gabe and Tess start a relationship. Gabe has to realize that Vincent (Jay Ryan) is Katherine’s true love.

Vincent wants all these missions over with he tells FBI Agent Bob Reynolds (Ted Whittall). Reynolds asks Vincent does this have something to do with Katherine? Vincent tells him “yes.” Reynolds continues to state, “you’re a soldier on a mission, and you need to stay away from her.” Vincent tells Reynolds, “And you need to find me another beast.” Instead of Reynolds finding the next beast it turns out that Gabe needs his help. Someone is setting fires every 24-hours and Gabe knows it is a beast, which is why the FDNY never find a body. Gabe feels that if they catch this beast alive they could try to kill the beast inside him and if it works it could save Vincent, he tells Katherine. “I need to save myself, before I can save anybody else” Katherine states back to Gabe. She does not like this idea too much sending Vincent to find this guy as he could die in the fire. He is not invincible.

Gabe takes matters into his own hands and goes to see Vincent. Another person Vincent really doesn’t remember, but he knows Gabe is a friend of Katherine’s. Gabe tells Vincent, “ I tired to kill you four months ago.” You had to laugh when Vincent goes “well, that’s a way to make friends!” Since Vincent can tell when people are lying and he knows Gabe is telling the truth. Gabe continues to tell him about the fire setting beast and what they are planning which could also be a way for him to get his life back to normal and be with Katherine. You know that will never happen until the end of the series.

Vincent storms out leaving Gabe at his place. For someone that is suppose to be covering things up on who he works for leaving someone, especially a cop in his place you think that they would go looking for answers. With Gabe trying to gain Katherine’s trust that would be something I would think he would do. That could also lead to her finding out that Reynolds was her real dad.

Seems Vincent now has super hearing where he can stand on top of a building and listen to the sounds of the city, which is how he pinpoints the sirens going to the fire. Turning up at the fire he meets up with Arsonist/Structural Engineer, Eddie Long (Vladimir Jon Cubrt). Vincent may have super strength, but Long who has the power to use the fire to his advantage knocks Vincent out. I was a little disappointed that this new beast actually didn’t turn into a beast, which was what I thought the ones created by Muirfield did. Long points that out that they sent another Muirfield guinea pig after him.

In the next scene Katherine and Gabe are walking in the hospital as Vincent, thanks to Gabe, was admitted as a John Doe as he was found at the scene unconscious.  Reynolds shows up, but when he sees Gabe greet the arson investigators, he leaves the scene. They start to ask Vincent questions, although Gabe told them his name was Victor and that he hit his head and has amnesia so may not remember everything.

This I thought was a great scene and gave the fans another part of Vincent that was not shared in the first season. The young investigator is wearing a nametag of “Keller” and Vincent starts to have flashbacks of his past as a fireman. This turns out to be his nephew Aaron (Bryan Dechart). Aaron followed in Vincent’s brother William (Chad Connell) footsteps becoming a fireman. Most of the Keller family were firefighters, but William told Vincent that he was going back to school to study to become doctor. While Vincent is having these back flashes he is turning into the beast, ripping the hospital sheets and finally jumps out of the window.

Finally the memories are starting to come back more and more. When Vincent was in the hospital Katherine asks him, “do you want to remember me” and he answers, “I do more then anything.”

Katherine and Vincent go to the fire station to help and see what they know and on the wall are pictures of Vincent’s father, and brothers. Aaron is still very upset and goes to leave but the Fire Captain, Charlie McWenstle (Joel Keller) orders him to wait, but as everyone is looking at a map of buildings that are owned by the Saigon Company as that is the buildings the arsonist is targeting Aaron leaves. They know where he is going.

At this point the alarm goes off that there is a fire in Saigon Headquarters. Vincent goes inside while Gabe and Katherine cover the exit. Vincent goes into the building yelling for his nephew. Long is amazed that he is still alive and starts to run towards him, but Vincent is prepared this time hitting a pipe which shoots out air I guess and that stops Long and knocks him backwards. As he is looking for his nephew flashbacks start coming again of him and his brother, William, fighting a fire. William appears to him and he then notices that is right where Aaron is laying. Putting Aaron over his shoulder he leaves the parking garage to get help for him. Aaron opens his eyes and looks at Vincent “Who are you?” Vincent replies “Buddy, I wish I could tell you!”

Meantime on the stairwell Long is coming down and Katherine shoots him and Gabe and her try to revive him to see if they can bring him back to kill the beast inside him, but no luck. Poor Vincent will just have to stay a beast for now. The Fire Captain walks over and looks at Aaron “You freakin’ Keller boys you never learn do you?” He has no idea that Vincent is one of the “Keller” boys.

Aaron stops by the precinct to thank Katherine and would like to thank Vincent, but she tells him “he is undercover at the moment.”

The ending was very sweet I thought. Vincent and Katherine are walking down the street, at night, talking about his remembering and she tells him “ you can’t change the past, you can remember it, learn from it and hopefully move forward…together.” They are standing in front of a fountain holding hands and he puts his arm around her.

All in all I thought it was a good episode, but I’m a bit confused as last season Vincent was suppose to be the only one still alive from the Muirfield experiments. Then Gabe came in as a beast…so I guess it was misleading when Vincent was telling the story that he was the only survivor. How many more beasts are there in the world left until Vincent finishes his missions?