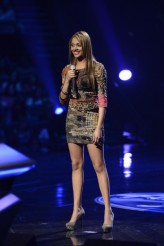 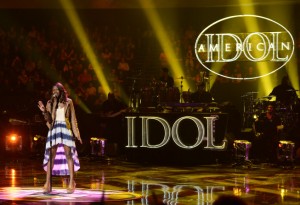 Finally, America gets involved on the world’ greatest karaoke competition, AMERICAN IDOL, as we are down to the Top 10 chicks and Top 10 dudes that make up the finals.

Does anyone care is a good question to ask given the bottoming out of the ratings but we’ll just put that on the back burner for the duration.

First up is the ladies of the competition, the next night will be the dudes and the third night will be the results. Really? Three nights of this crap. Why can’t they just compress it into two nights, not that anyone is watching this show anymore – oops I brought it up.

Anyway, let’s get this party started.

Singing Tina Turner’s “What’s Love Got to Do With it” the “Liberian Nightmare” definitely displayed her freaky side she wanted the audience to see. And perhaps that was a mistake. And probably picking this song was a mistake as well. It was all over the place as much as she was on stage. Not a good way to start the show and to impress the viewers that you want to vote for you. The judges agreed with Urban basically coping out in his critique, Minaj told it as it was, Jackson said it wasn’t her best, and Carey basically said nothing about anything. Grade: C

One of the favorites among the women, Breanna chose Beyonce’s “Flaws and All” as her song choice and while the beginning was shaky, she nailed the rest of it and proved why she should definitely be among the Top 10 next week. Given she’s also a total babe, hopefully America will vote for her. Urban loved it shockingly, Minaj hated it because obviously Breanna is not one of her girls, Jackson called it safe, and Carey said it was a raw song and basically said nothing. Grade: B+

The performance of Aubrey’s “Big Girls Don’t Cry” by Fergie was merely OK mostly because it isn’t a song that shows off much of any vocal range. It was sung fine, however, it was a bit pitchy, dawg. I have a feeling there will be plenty of other contestants that outshine her but she has to do just better than four others to move on. Urban loved it (seeing a theme here?), this must be one that Minaj loves because she liked it, Jackson liked the emotion but it didn’t have any moments she needed, and Carey basically said nothing (seeing a theme here?). Grade: B-

An interesting song choice here by Janelle going with “If I Can Dream” by Elvis Presley but it basically showed what she’s all about and is the country voice in the competition. It’s a good angle given how well the country based singers have done in previous seasons. Given it was a decent singing performance, I expect her to be among those voted in. Urban loved it (really, I can’t say anything else), Minaj wants to eat her like a marshmallow, Jackson likes the throwback thing she has going on, and Carey basically said nothing. Grade: B

The first Faith Hill song of the night from Tenna, “Lost,” is delivered in pretty good fashion but I’m already sick of the ballads and we are only half way through the contestants. While I understand that you need to show your vocal talents above dancing and being loud (see Zoanette), it just was a bit sleepy. Urban loved it, Minaj likes her boobs (join the club) and thought she was a professional, Jackson loved the beginning and liked she didn’t over-sing it, and Carey basically said nothing. Grade: B-

Channeling prior IDOL contestant’s album, Miller chose Colton Dixon’s “Never Gone” as her performance behind a piano she showed that not only does she have the vocal chops to compete but she’s also got some talent behind her voice as well. Helps that she’s also totally hot. Probably the best performance of the night so far and shows you can do an upbeat song and still show off the chops. Urban loved it, Minaj said she’s a shoe-in for the next round, Jackson called her a star being born on stage, and Carey basically said nothing. Grade: A-

I love the dress Amber is wearing but taking on Whitney Houston’s “I Believe in You and Me” is no small task. However, she delivers and shows why she has made it to this point already. She should definitely be in the finals if anyone watching the show has ears. Urban loved it, Minaj thinks she is already above the competition in terms of her singing, Jackson said she’s in it to win it, and Carey basically said nothing. Grade: B+

The second Faith Hill of the night, “Stronger,” was the choice of Kree and it was pretty darn good. Not sure if she will get lost in the shuffle of all the other performers as she isn’t that recognizable. But she probably should be moving on as her voice is wicked strong. Can the show support more than one country singer? Guess we shall see. Urban loved it, Minaj said her sexiness level went up again, Jackson also said she is in it to win it, and Carey said, sigh, nothing at consequence. Grade: B

Another sleepy time performance from Adriana who chose Destiny’s Child “Stand Up for Love.” I can see her getting bypassed by the other competition because this was just too sleepy and boring for what we have already seen. I don’t expect to see her going forward. Urban actually didn’t love it and didn’t like the song at all for her, Minaj said it didn’t stand out and she should come back next year, Jackson felt it was too sleepy, and Carey confused everyone but in the end said nothing at all. Grade: C

The final performance of the night came from Candice singing “Ordinary People” by John Legend and once again shows that you don’t need to sing just ballads to show just how much of a badass you can be. While I didn’t like her song choice in the previous round, this was so much better and showed off just what she can do. Definitely one of the finalists, or at least, she should be. Urban loved it, Minaj saluted her, Jackson thinks she has one of the best voices in the competition, and Carey says basically nothing of interest.

So who will America choose? I think it will be Kree Harrison, Amber Holcomb, Angie Miller, Breanna Steer and Candice Glover.