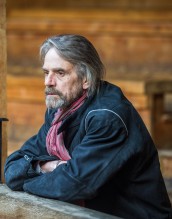 While promoting SHAKESPEARE UNCOVERED, actor Jeremy Irons made some quite hilarious comments about the popular British series DOWNTON ABBEY. Irons is not completely bashing DOWNTON, but he does wish the American audience would broaden their viewing depth and check out the SHAKESPEARE series to see some of the best acting that Britain has to offer.

“THE HOLLOW CROWN series is where you see some of the best British actors playing Shakespeare, is what it can do to open up to this huge American audience this gold dust.  Show them that, actually, television doesn’t end with DOWNTON ABBEY,” Irons laughs.  “If you think that’s good, then watch these Shakespeare productions, and you’ll see what real writing, what real stories, what real characters are about. We do love DOWNTON ABBEY, but it’s sort of — it’s sort of like — I mean, I don’t know your cars well enough, but it’s — you know, it’s like a Ford Fiesta will get you there and give you a good time. An Aston Martin, that’s what you’ve got with Shakespeare.”

Of course the most ironic part of this panel is that DOWNTON airs on PBS in the US as does SHAKESPEARE UNCOVERED, so Irons was taking jabs as his own network (something that is typically not done at the TCAS or in front of a room of television critics at the very least).

Nevertheless, watch both programs on PBS. Let’s face it PBS doesn’t put product on the air that isn’t worth watching so check them both out; as if most of our reading audience isn’t hooked on DOWNTON ABBEY already!