Home » TV News: DOWNTON ABBEY not to air at same time in U.S. on PBS as in UK 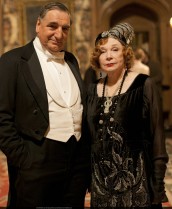 So it looks as if the American audience for DOWNTON ABBEY is going to have to be patient to see the next season in January again. Today at PBS’ executive session for the TCAS, President Paula Kerger explained why they place DOWNTON where they do in the schedule for the year.

“This is a question of great debate, as to whether to try to bring the broadcast of the two together,” states Kerger.  “It’s complicated, for a lot of reasons.  One is that the version that airs in the UK airs with commercials, and we air ours without, so we actually edit the program together.  We also look very carefully at where, in the broadcast schedule, it falls.  So, how we’re going to end up making the decision is actually based on what we think will be best for the viewers and will help serve them well.”

She also addressed or artfully didn’t address the return of Shirley MacLaine for the fourth season.

“I’m not telling you anything about Season 4,” says Kerger with a sly smile. “Don’t trick me.  They’re actually starting work on Season 4.  I think she’s been great.  I don’t know what people thought when it was announced that she was joining the cast, but I think she’s been terrific.  She has fit into the series extraordinarily well, and she’s added yet another dimension to the show.”

So hold out for the new season of  DOWNTON, fans! The show is worth the wait, and in the meantime get all of your friends to watch it and keep them coming back to PBS Masterpiece!