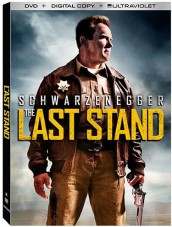 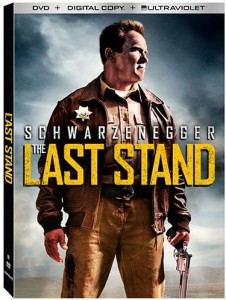 THE LAST STAND – Before Arnold Schwarzenegger went off to become the Governator, he was racking up a pretty long list of bad movies. Long gone were the RUNNING MAN, TOTAL RECALL, RAW DEAL, COMMANDO, PREDATOR days instead we got END OF DAYS, THE 6TH DAY, LAST ACTION HERO and more. Luckily, THE LAST STAND does not continue Arnie’s bad movie trend. While it isn’t a great film, it is fun and has enough action, violence and harsh language that it harkens a bit back to the golden age of Arnie. It also plays to the aging actor as well. There are plenty of jokes about his age and his experience and he isn’t the invincible killing machine as he was in some of the earlier films (although he’s very tough).

The supporting parts from Johnny Knoxville, Forest Whitaker, Peter Stormare and Jamie Alexander are throw aways and could literally be occupied by any actor (maybe except Knoxville) but the real star here is obviously Schwarzenegger and always has been in these types of movies. Basically, a slew of terrible FBI and police let a dangerous drug dealer go free and literally cannot stop his car from Las Vegas all the way to the Mexican border. In the last town before Mexico, this bad guys cronies are constructing a bridge for him to jump a large crevice and sheriff Arnie comes in to stop them and confront the drug dealer. It’s fun. It’s mindless. It’s an Arnie movie. Check it out. 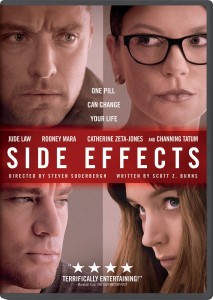 SIDE EFFECTS – You may have been confused about what Steven SoderBergh’s SIDE EFFECTS may have been about given the trailer. It seemed that it might be able a medical breakthrough that helps people overcome depression but also gives them homicidal impulses. Well, in some respects, this is true but the movie is more about Dr. Banks (Jude Law) trying to prove that one of his patients he was treating for depression, Emily (Rooney Mara), killed her husband for financial gain rather than a result of some chemical reaction to the medication she was on. There are plenty of twists and turns that keep you guessing here and there about what really is happening, which is good, however, you can see some of big reveals coming. There is some interesting commentary about the drug business here and how much doctors and others are willing to go in order to make a buck – even to the point of murder. But the corporate responsibility angle or wide spreading conspiracy isn’t here which may make for a different movie on the subject. 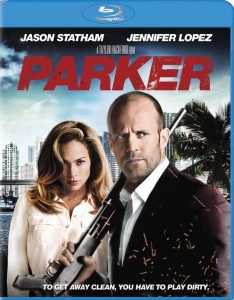 PARKER – Jason Statham is the king of the one-word action flicks: SAFE, BLITZ, TRANSPORTER, CRANK and now PARKER. In all of these movies, Statham is pretty much the same character: tough, hard to kill, good at fighting, good at killing and above all else honest and genuinely a good guy. In PARKER, this is exactly who he is. He turns to crime in order to help out his girlfriend and get a step up but when the deal goes bad and his partners turn on him, Parker sets out to get even because people even in crime should act as decent individuals. He gets some help from a down-on-her-luck real estate agent played by Jennifer Lopez who is pretty interchangeable here with any actress but still does a fair enough job in helping bring those that wronged Parker to justice. As always, the movie looks that much better on Blu-ray so I recommend watching it on that format to get the full impact. 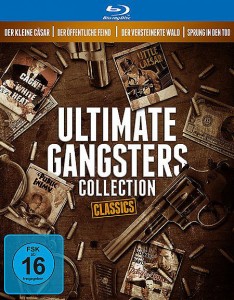 ULTIMATE GANGSTERS COLLECTION: CLASSICS – A cool way to get all the classic gangster movies in one fell swoop. Included here are four movies that harkens back to a more simpler Hollywood, one without big flashy special effects and big budgets but more about characters and the law enforcement officials that went out to take down crime. The four films include THE PUBLIC ENEMY, WHITE HEAT, LITTLE CAESAR and THE PETRIFIED FOREST. Also included is a feature-length documentary on what made the gangster films of old so special and who made them and what they were trying to do with these films called PUBLIC ENEMIES: THE GOLDEN AGE OF THE GANGSTER DRAMA. If you are a fan of the really old school mafia movies, this is one you can’t pass up. Even better, all of these movies have been converted to Blu-ray and this is their debut in high definition. 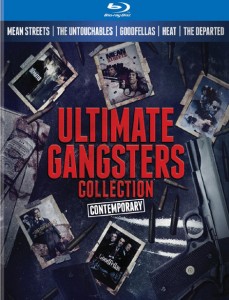 ULTIMATE GANGSTERS COLLECTION: CONTEMPORARY – But say you don’t really know those movies and aren’t really a fan of the old gangster movies. Well, this one is for you then. This collection of five modern crime movies is stacked with not just the ultimate mafia film in THE UNTOUCHABLES but also GOODFELLAS, MEAN STREETS, THE DEPARTED and one of my all time favorite movies HEAT, which is simply a great film from point A to point B. All of these movies are collected in this one awesome set where you can spend hours watching just good drama all about the mafia and big bad guys doing bad things. If you don’t already own these films, or want them on Blu-ray, this is simply something you won’t want to pass up. 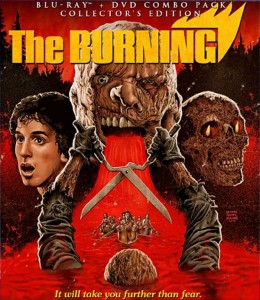 THE BURNING – One of the unknown or forgotten gems during the salad days of the 80s slasher extravaganza was THE BURNING that took place, not shockingly, at a summer camp. Early on we see a group of kids bullying another and accidently setting him on fire. Later, he’s recovered in a hospital but escapes never to be seen from again. Fast forward to a few years later and a new group of campers are there and are doing all the sorts of things you have seen in previous films – getting naked, screwing around, doing summer camp activities. Someone doesn’t like this too much and they begin eliminating the councilors and kids with great gusto – including a great scene where a number of kids are taken out all at once on a raft in gory fashion. As the bodies start to pile up – with some great gore and deaths from master Tom Savini in some of his best work ever – they figure out someone is out to get them ending with a pretty clever finale. Restored from the original source material and converted to Blu-ray from Shout! Factory this is a great gem for anyone who loves good horror and classic slasher action. 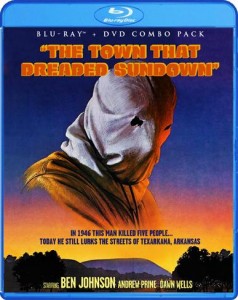 THE TOWN THAT FEARED SUNDOWN – The first time this title has come to video in a long, long time and luckily Scream Factory, the horror label from Shout! Factory, has unveiled it on Blu-ray. While not nearly as fun or classic as THE BURNING, this may be considered the grandfather of slasher films as it tells the story of a masked man that goes on a terror spree through a small town in the 1950s. The cops and feds race to figure out just who is doing it and why while the murderer takes his evil out on poor couples that are innocently necking at a local hang out. While slow paced for modern movies, at the time it was brutal in the ways it depicted innocent people getting brutalized in often hilarious ways – the best being the killer strapping a knife to a trombone and playing a deadly tune on a woman’s body. 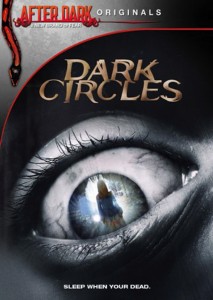 DARK CIRCLES – Early parenthood sucks. You have a screaming little thing that needs you at every turn with feeding, changing, snugging or whatever else is needed. Plus, when this little demon comes home, it turns your sleeping cycle into a crazy messed up world where night is day and day is night. DARK CIRCLES, the latest After Dark original, plays to this horrifying aspect of parenthood with this horror movie about lack of sleep, what it does to us mentally and a haunted house with a nasty mother type ghost running around killing people. Now personally, I would have loved this to have stayed with the home theme of a lack of sleep causing numerous issues with these two people, however, it still works and ends up being a pretty good horror flick that isn’t scary but not bad. 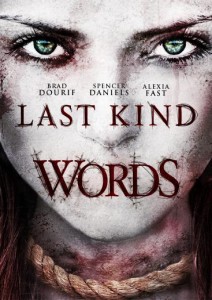 LAST KIND WORDS – The same can’t be said for this horror movie that calling it slow paced is the understatement of the month. The story centers on a 17-year-old that moves to a farm with his parents and is visited by a ghost in the forest. Of course, initially this isn’t known to him and they do what typical 17-year-olds might do when courting a relationship. What follows is, like I said, a slow, very slow burn to the finish where the kid learns about all the bad stuff that went down on the farm and tries to save the soul of the girl that he has fallen for, even if she is a ghost. If you have nothing else to watch it might be worth it but other than that, do something else. 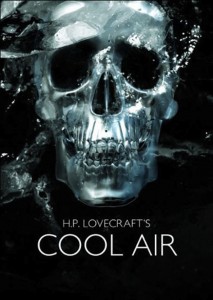 COOL AIR – Unfortunately, it doesn’t get much better in the horror department with COOL AIR. In along line of really bad production films from Lionsgate, this one supposedly is based on a story by H.P. Lovecraft where a young dude checks into an apartment house surrounded by weird people. The weirdest being a doctor that has prolonged her life by keeping herself in an environment that is about 50 degrees. When the young guy has a heart attack for some reason, the doctor saves him and they begin a strange relationship where he learns that the doctor has been performing surgeries on the other people in the apartment using her abilities to prolong life and bring those back from the dead. It sounds better than it is. The production values are minimal and the story drags and there is nothing scary here. Again, passable if you have nothing else going for you. 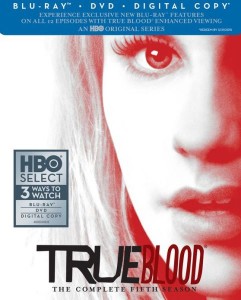 TRUE BLOOD: THE COMPLETE FIFTH SEASON – I thought I might give up on TRUE BLOOD. How much of the same ole, same ole can we take. Sookie (Anna Paquin) loves Bill (Stephen Moyer), Sookie loves Eric (Alexander Skarsgard), Sookie hates Bill or Eric or whoever. Plus with all the fairy bullsh** and constant replaying of plotlines it just wasn’t something I wanted to continue with. That changed when I watched the first few episodes of Season 5. Bill and Eric get in deep with the Vampire Authority that secretly believe they can bring back their God, Lilith, by becoming the predators they were meant to be and appeasement is not an option. It leads to some pretty nasty scenes where vampires are killing en mass and each other. This brought me back in to the show as did a slew of new hot chicks getting naked and some interesting subplots involving Jason Stackhouse (Ryan Kwanten), Jessica (Deborah Ann Woll) and Sam (Sam Trammell). So maybe if you found yourself not feeling TRUE BLOOD any longer, check it out as you may be dragged back in.