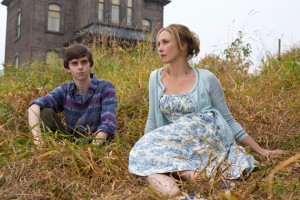 When A&E announced they were going to do a PSYCHO prequel series called BATES MOTEL, it was questionable whether such an iconic character could be reinvented once again (anyone remember the 1998 Gus Van Sant shot-for-shot remake?)

However, with the great new previews and an excellent pilot episode, the Carlton Cuse (LOST) executive produced series is as epic and cinematic as you can get with Vera Farmiga playing the domineering Norma Bates and Freddie Highmore playing her jittery high school son Norman.

At today’s Winter 2013 Cable TCA’s, Cuse revealed more details about BATES MOTEL and what to expect.

Most importantly, the series is not set in the 1950s, but is a modern day retelling, and while we know what ultimately happens to Norman via the original Alfred Hitchcock movie, Cuse admits this will be their own take and direction on the material.

“It seemed really interesting to do a contemporary prequel and do something that was inspired by PSYCHO, not an homage to PSYCHO,” says Cuse. “How did Norman Bates become that guy in the movie? It is a tragedy. We wanted audiences to fall in love with these character even though we know inevitably what their fates were.”

And yes, the series will at some point catch up to the events in the original PSYCHO, but it will still be on the TV series’ own terms and that the events that happened in the subsequent movies are not necessarily viewed as canon either.

“In some general form, we are going to catch up to the version of the character we know from the movie,” says Cuse. “We don’t feel literally bound by having Marion Crane rolling into the Bates Motel. The relationship you think is between Norma and Norman, is not what it’s going to turn out to be. What is that relationship like and what drives Norman to be the person he becomes – [the TV series] is a process of invention, rather than sticking to what has been done.”