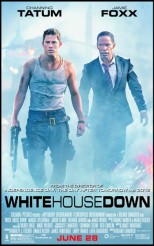 An unlikely but fun thriller with a good heart

It’s easy to like WHITE HOUSE DOWN, even as we acknowledge that it seems awfully unlikely. Granted, the U.S. government can be dysfunctional, but it doesn’t usually have the kinds of lapses that would lead to a cadre of mixed mercenaries and ideologues invading1600 Pennsylvania Avenue, armed with actual weapons rather than words. Part of the film deals with uncovering the question of who these people are and what their ultimate goal is, but more of the movie is justifiable run and gun action, with heroes whose causes couldn’t be more righteous. Much of the film’s appeal comes from the fact that both leading characters are pretty low-key and self-effacing about all this, even though one of them happens to be the leader of the free world.

Channing Tatum stars as former soldier John Kale, now a low-level Washington,D.C.government worker, who yearns to be a Secret Service agent. He brings his eleven-year-old daughter Emily (Joey King) along for his job interview – which goes poorly due to his spotty past – and a following tour of the White House.

Poor John and Emily are still taking the tour when explosions are detonated and group of American terrorists (already hidden in the building) start shooting and taking prisoners. Separated from his daughter, Kale tries to find and rescue her – but winds up being the only person in the right place at the right time to come to the direct aid of U.S. President Sawyer (Jamie Foxx).

On screen black U.S.presidents are nothing new at this point, but Sawyer is the first who appears to be modeled after the current Chief Executive. Contrary to how the trailers make it appear, Foxx doesn’t really break out into full action mode here, which makes a certain amount of sense – his character is a politician, not a police officer, after all – and allows Sawyer to display common man common sense. (When Kale executes a move that is much more standard in movies than in real life, Sawyer responds as most of us would.)

The stakes start high and escalate to potential doomsday, but the filmmakers are aware of their audience. Early on, there’s even a reference to one of director Roland Emmerich’s better-known previous works. Emmerich of course excels at gigantic action sequences, and there are plenty here, but they are uncommonly well-spaced, so that we have time to collect ourselves, rebond with the characters and mentally regroup before the next assault.

Writer James Vanderbilt is skillful at letting us know things are potentially pretty dire without tipping over into being humorless. Indeed, WHITE HOUSE DOWN feels a little like what a season of 24 might have been like if Jack Bauer were a novice, people cracked a few jokes and if the whole year had been crammed into a 138-minute running time that represents events between dawn and sunset. We are given reasons to like our good guys and there are a number of nicely surprising moments where characters do things that hew more toward everyday logic than film conventions.

Interestingly, for a genre that often tilts right, WHITE HOUSE DOWN leans left, in terms of big-picture agendas and threats. The script certainly has fun with the motives of its villains, most of them motivated by belief rather than money.

Tatum is agreeable, sincere and fit as the hero and Foxx is suitably cerebral, charismatic and forceful as the President. James Woods is wily and emotionally persuasive as the retiring head of the Secret Service, Richard Jenkins makes an strong impression as the Speaker of the House, Maggie Gyllenhaal radiates professionalism as a Secret Service high-up and Lance Reddick comes off as one of the sternest men alive as the general in charge of military operations. Jason Clarke is terrific as one of the chief terrorists.

Having only read a synopsis of but not seen OLYMPUS HAS FALLEN, a film with a similar premise that was released a few months ago, it’s not possible for this reviewer to compare the two, but on its own merits, WHITE HOUSE DOWN has everything it should: solid story structure, good execution and plenty of explosions and ass-kicking.