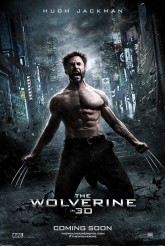 A spin-off that spins off into the misfire zone

The major problem with THE WOLVERINE is not that the title character – or for that matter, Hugh Jackman, the actor who plays him – cannot headline a feature film. Wolverine, aka Logan, an immortal mutant whose skeleton has had the metal adamantine added to it, has proven to be a compelling figure, both in the Marvel Comics that introduced him and as played by Jackman as a lead in four X-MEN films (plus a cameo in X-MEN: FIRST CLASS). Nor is the trouble that THE WOLVERINE offers an anti-continuity jolt to the previous most recently-released X-MEN film (FIRST CLASS), though viewers who haven’t been paying close attention may be baffled. The problem isn’t even that Logan doesn’t have many other mutants to play off of here. The problem is that, in an evident effort to pay homage to Wolverine’s comic book origins, writers Mark Bomback and Scott Frank have come up with a scenario that includes samurai, ninjas, the Yakuza and a giant robot, but no subsidiary characters to care about and a plot that (minus the giant robot) seems like it could be wrapped up on an episode of an hour-long TV procedural. Wolverine arguably deserves his own story, but the story of THE WOLVERINE doesn’t deserve its own superhero.

In a prologue, we see Logan rescue a young Japanese soldier, Yoshida, from the bombing of Nagasaki, after Yoshida has risked his own life to help Logan. Cut to the present. Loganhas been living in the wilderness, while Yoshida (Haruhiko Yamanouchi) is now the most powerful industrialist in Japan. Yoshida is dying and sends his plucky emissary Yukio (Rila Fukushima) to bring Logan to Tokyo in order to say goodbye. With this amount of money and mortality in play, there’s much more going on here than a simple desire to say farewell, and soon Logan finds himself striving mightily to rescue Yoshida’s granddaughter Mariko (Tao Okamoto) from a variety of nefarious individuals.

There is one truly swell sequence, with Logan and a ninja adversary trying to maintain footing, or at least handholds, as they battle atop one of Japan’s famous bullet trains. However, this is small compensation for scene after scene of banal scheming, betrayal that has no sting because we didn’t trust the betrayers or care about the betrayed in the first place, and Logan having no more motivation than being a decent (and virtually indestructible) person who is driven to do the right thing.

Logan keeps having visions of the late Jean Grey (Famke Janssen, another X-MEN alumnus), but even for those who recall the plot of X-MEN: THE LAST STAND, it would be better to give us something more of what went down between them then Logan just saying sadly that Jean hurt people. Logan is supposed to be wrestling with his past with Jean, but we aren’t shown that past here, nor are we given anything that makes us root for Logan to have an epiphany. Jackman is fine as far as it goes, making Logan persuasively grumpy, anguished and driven by a sense of responsibility (and of course buff) as events require, but the material doesn’t give him much space to truly shine.

The film has several other problems, including some inexperienced cast members, albeit Fukushima is agreeable as the resourceful Yukio. They are not helped by the largely flat dialogue, which moves the story along but doesn’t much speak to character.

The best sequence in THE WOLVERINE takes place when the closing credits pause, giving us a scene that portends promising developments to come in the next X-MEN film and suddenly injecting an adrenaline thrill into the proceedings. It’s a shame that the rest of WOLVERINE doesn’t hold this kind of promise and excitement.