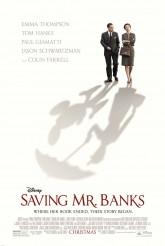 Something you realize very early on in SAVING MR. BANKS is that the filmmakers are very fortunate that Emma Thompson exists to play MARY POPPINS author P.L. Travers. As Mrs. Travers (as she insists on being addressed) is written in the screenplay by Kelly Marcel and Sue Smith, the woman is inconsiderate, heedless of the views or feelings of anyone other than herself, unappreciative and snippy. Were she played in any other way, and/or by anyone but Thompson, we’d probably wish her eaten by a giant dancing penguin. However, even when Mrs. Travers is at her worst, Thompson is somehow able to convey that there’s a human being who has become trapped in this impossible shell.

This much is fact – for twenty years, Walt Disney, played here by a charming Tom Hanks, tried to get the film rights to MARY POPPINS (Travers had penned four books in the series at that point), and for twenty years, Travers refused to sell them. However, in 1961, Travers desperately needed money and so she agreed to come to Hollywood to see whether the script for the proposed film version could be shaped to meet her approval. She wouldn’t sign over the rights until she was satisfied.

Among other things, Travers insisted on tape-recording the script meetings. An actual clip of Travers talking with the MARY POPPINS creative team is played at the end of SAVING MR. BANKS. This is amusing and also suggests that, while the film may take dramatic liberties here and there, Travers’ behavior in the scenes of interaction with downtrodden screenwriter Don Da Gradi (Bradley Whitford) and the songwriting brothers Robert (B.J. Novak) and Richard Sherman (Jason Schwartzman) are fairly true to life.

SAVING MR. BANKS goes back and forth between Travers’ adventures in Los Angeles and fighting Disney, who courts her approval and is clearly not used to hearing the word “no,” and Travers’ childhood as Helen “Ginty” Goff (Annie Rose Buckley). As a young girl, Ginty moves with her beloved father (Colin Farrell), troubled mother (Ruth Wilson) and two little sisters from a lovely middle-class home in an Australian city to a cabin outside a much smaller town. We start to see why Travers as an adult behaves as she does. More, we understand that Travers sees her creation very differently than many of her readers do.

There aren’t too many films that successfully tackle the topic of authorial intent versus audience interpretation – the mere sound of this as subject matter is enough to put some people off. SAVING MR. BANKS is all the more surprising for doing this in a crowd-pleasing way. Without being esoteric or oblique, the film illustrates the creative process, both individual and collaborative, that will induce knowing laughter from those who have been there, enlightens those who haven’t and entertains pretty much everyone. There’s also the spectacle of the irresistible force of Walt Disney meeting the immovable object that is P.L. Travers, which is consistently engaging.

Fans of the MARY POPPINS film are also likely to be moved by scenes of the Sherman brothers working on the songs, and no one is likely to hear “Let’s Go Fly a Kite” the same way ever again. There’s also some winning material with Paul Giamatti as the world’s kindest limo driver that works in this film’s universe while harking back to the warmth that suffuses the best of Disney’s ‘60s live-action fare.

The scenes of Ginty’s days with her family start with the charm of imagination shared between parent and child and turn into something darker. Parents who bring children to SAVING MR. BANKS should be prepared to discuss things like depression and alcoholism.

People who have read the MARY POPPINS books and know how much stranger, darker and sharper they are than the Disney version will understand going in that Travers loses a lot of her battles about tone and content, but (at least in this movie) we also see how certain elements honor her passion and her motives. If Travers could only see Thompson’s performance, she might or might not recognize herself, but she’d likely recognize the Mary Poppins of the novels.

SAVING MR. BANKSends up being both a Disney entertainment and an insider’s Hollywood movie, along with simply being pretty swell all round.