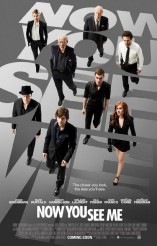 A smart, vigorous and entertaining comedy thriller about stage magicians

To get one potential misconception about NOW YOU SEE ME out of the way fast, no, the movie is not about magicians attempting to fool us, the film’s audience, with stage magic. The film gets great mileage out of teasing us with how the main characters manage to fool their onscreen stage audiences, in addition to the larger arc of what these people are doing and why they’re doing it.

In quick succession, we meet A. Daniel Atlas (Jesse Eisenberg), who knows how to wow an impromptu crowd, ace hypnotist (and sometimes blackmailer) Merritt McKinney (Woody Harrelson), escape artist Henley Reeves (Isla Fisher) and sleight-of-hand specialist Jack Wilder (Dave Franco). The four are brought together by a mysterious invitation none can resist. A year later, they’re performing together as the Four Horsemen. In Las Vegas, they cheerfully announce that a randomly-selected audience member is going to rob a bank in France. The upshot is that the audience member thinks it has happened, the audience thinks it has happened – and even Interpol and the FBI think it has happened, but can’t figure out how it was done. Harried FBI Special Agent Dylan Rhodes (Mark Ruffalo) and cool, collected French Interpol representative Alma Dray (Melanie Laurent) wind up working together on the case, which also winds up including the Four Horsemen’s producer Arthur Tressler (Michael Caine) and professional magic debunker Thaddeus Bradley (Morgan Freeman).

What makes NOW YOU SEE ME such fun is that it is fast, mentally nimble and still action-packed. Director Louis Letterier demonstrates that he’s adroit with both dialogue and demolition – there’s a car chase that would fit right in if it drove straight across the multiplex into FAST & FURIOUS 6 and some inventive fight sequences as well.

The quips in the script by Ed Solomon and Boaz Yakin & Edward Ricourt, from Yakin and Ricourt’s story, fly frequently and amusingly. Eisenberg as the deadpan smartass and Harrelson as the folksy but dangerous mentalist fare particularly well, with Ruffalo showing he’s likewise adept at the snappy patter. Caine and Freeman have a scene together with neither giving an inch that would be wonderful to watch no matter what the context. Film trivia fans can also enjoy the zero-degrees-of-separation in reteaming Eisenberg and Harrelson (previously together in ZOMBIELAND) and Caine and Freeman (from the recent DARK KNIGHT trilogy). Fisher is properly wily and Laurent seems simultaneously glamorous and credibly efficient.

The exposition of how the magic acts are actually done is illuminating and highly entertaining, while the mystery is satisfyingly dense. Viewers may be divided over the final revelation, but it is inarguably unpredictable. At a time when most mentally agile films are very talky and most action films have sing-along plots, NOW YOU SEE ME is a surprisingly lively set of twists, turns, revelations and explosions.