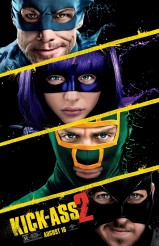 An intermittently entertaining movie that suffers from a serious identity crisis 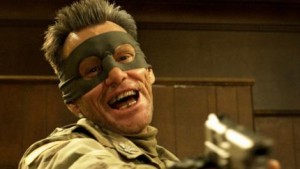 Released in 2010 and based on the comics series created by Mark Millar & John S. Romita Jr., the original KICK-ASS was a little uneven and slightly more controversial, what with a pre-pubescent Hit Girl (Chloe Grace Moretz) gleefully and gorily slaughtering bad guys. In the main, though, it was fun, surprising, self-aware without being self-sabotaging and generally worth seeing.

Now KICK-ASS 2 is here. Director Matthew Vaughn and his screenwriting partner Jane Goldman are absent from those roles here (they’re still aboard as executive producers), replaced by writer/director Jeff Wadlow. Nicolas Cage is also gone, as his Big Daddy character was killed off in the first film. Onscreen, Big Daddy is continually mourned and mentioned by his daughter Hit Girl, aka Mindy McCready, now fifteen and struggling to adjust to normal life at the behest of Big Daddy’s old friend and still dedicated police officer Marcus (Morris Chestnut). Meanwhile, Hit Girl’s previous companion in crime-fighting, Kick-Ass, better known as Dave (Aaron Taylor-Johnson), is struggling through the mundane miseries of high school.

Dave’s distinction was that he created the Kick-Ass persona without any super powers, just a wish to do good. He got his ass kicked quite a lot before gaining a mild power (a modicum of physical insensitivity to pain) and wound up becoming a hero. Even though Dave has abandoned the fight, a variety of ordinary citizens have become costumed crime-fighters. Then rich, newly-orphaned Chris D’Amico (Christopher Mintz-Plasse), formerly a costumed ally known as Red Mist, decides he’s going to avenge the death of his crime lord father, who was killed by Kick-Ass in the first film. Chris takes on an unprintable super-villain name, assembles a team of powerful psychos and determines to find and kill Kick-Ass.

The intention seems to be to give KICK-ASS 2 a variety of modes and moods, but the result plays like a bunch of incompatible films spliced together. It seems hard to imagine that there will be a lot of viewers who will equally enjoy both the drawn-out coping-with-mean-girls subplot for Mindy and her bloodbath scenes, despite Moretz’s unimpeachable performance. For that matter, it’s a little hard to credit that all it takes for Mindy to turn conformist is an evening with three shallow classmates, though Moretz is gamely vulnerable and curious.

Then there’s the costumed vigilante business. The granddaddy of the form is obviously Batman, but the characters in KICK-ASS 2 continually maintain that this is the real world, “not a comic book.” It would take considerably more finesse than is displayed here to pull this kind of meta commentary off. The movie doesn’t seem to know what it wants to do with or say about Kick-Ass’ partners in dressed-up anti-thuggery. We meet a married couple who wear matching t-shirts bearing a photo of their missing child, which is supposed to be both tragic and comedic. Since it’s addressed once and thereafter ignored, it mostly seems exploitive – if this kind of thing is going to be brought up at all, it doesn’t warrant being pushed to the background, especially since what’s in the foreground isn’t more compelling. An unrecognizable Jim Carrey plays the leader of the costumed group. Carrey does a perfectly good job of playing a tough guy – and disguising himself – but the material doesn’t let him shine.

In the original KICK-ASS, there was a playful attitude toward the meta nature of it all, with Chris as the most articulate observer of comic book conventions and how they did or didn’t mirror what was happening. Here, Chris has evidently lost all of the first film’s perspective and gone completely berserk. Granted, this too is a comic book villain convention, but it doesn’t pack the wit of the character’s previous incarnation. The filmmakers also seem to want to have their cake and eat it, too, in terms of having their bad guy come up with racist monikers for his sidekicks. It seems like the idea is to simultaneously condemn Chris for coming up with the jokes while hoping the audience laughs. This in itself seems racist.

Also, much of the crazy charm of the first film was the weird, funny parent/child dynamic between Nicolas Cage’s Big Daddy and Moretz’s Hit Girl. There’s nothing here to remotely replace this – characters keep referencing Big Daddy and we, like they, keep noticing his absence. His costume is even in a display case, though for no explained reason, the ears have been shortened. Since the character is dead, it certainly makes sense that he’s not in the film, and it’s appropriate for Hit Girl to miss her dad, but sometimes this is emphasized so much that we wonder why we’re not just re-watching the original.

One good idea on the evil minions end of things is a character called Mother Russia, played by Olga Kurkulina. Kurkulina, along with the bravura stunts devised for her character, has such confidence, authority and menace that everything amps up whenever she’s on screen. She’s like a classic Bond villain on steroids. Taylor-Johnson projects a sweetness and integrity that keep us on Dave’s side – he also displays a commendably toned physique.

By the end of the movie, it’s hard to tell exactly what KICK-ASS 2 is trying to say about itself or its ideas. The narration meant to explain what we’ve been watching sounds uncertain, as though filmmaker Wadlow isn’t prepared to defend the thesis he’s proposing. There are some kick-ass performances and action scenes here that are certainly worth seeing, but there’s also a lot of wandering around with less successful results.