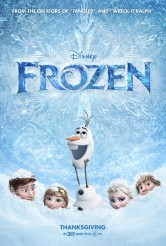 A consistently delightful animated feature, action-packed, beautiful to watch and studded with strong show tunes, FROZEN harks back to the Disney classics like THE LITTLE MERMAID and BEAUTY AND THE BEAST. FROZEN ventures further from its source material – FROZEN is credited as being “inspired by” Hans Christian Andersen’s THE SNOW QUEEN than either of those earlier fairy tale adaptations. Yes, FROZEN’s Princess-turned-Queen Elsa (voiced by Idina Menzel) can probably be called a Snow Queen, and young, determined Anna (voiced by Kristen Bell), does eventually go in search of her, but the reasons are very different here, as is the nature of the Snow Queen herself.

When Elsa and Anna are little girls, Anna delights in big sister Elsa’s magical ability to create snow and ice. Elsa is happy to oblige her adored younger sibling, until an accident makes their parents decide that the two must be separated. Elsa is kept alone in a room, fearful of her own abilities, and Anna (whose mind has been wiped of the memory) doesn’t know why her sister will no longer play with her. When the girls grow into young women, Elsa must finally venture forth for her coronation. Despite her best efforts to avoid doing anything unusual, Elsa is provoked, which results in her fleeing for the mountains, leaving behind an unseasonable frost. Set on saving Elsa, and the kingdom, Anna sets off in pursuit, with the help of mountaineering ice salesman Kristoff (voiced by Jonathan Groff), his reindeer Sven and a very cheerful personage called Olaf (voiced by Josh Gad).

The sentiments and the visuals are equally gorgeous, with sisterly love and friendship in the forefront. The humor is plentiful and genuine, with Gad’s optimistic Olaf as a standout. Bell is perfect as the plucky, klutzy Princess Anna. Menzel, who won a Tony for her performance as the witch Elphaba in WICKED, seems likewise the ideal choice to speak and sing for Elsa, who has an I’m-isolated-but-learning-to-love-my-own-power ballad that’s very much in the vein of “Defying Gravity.” Songwriters Kristen Anderson-Lopez and Robert Lopez contribute several other memorable numbers as well, including a hilarious (in context) ode to summer.

The messages in the script by Jennifer Lee, from a story by Lee and Chris Buck and Shane Morris – with Buck and Lee as directors – are all laudable and are supported by the story’s events, rather than just given lip service: be yourself, it’s great to have special talents, it’s also great to be normal and know what you want, be open with your loved ones, don’t be driven by fear. However, there’s one message that is so unaddressed that it’s unclear if it’s even deliberate, which is that the people in your life who you look to for guidance and who genuinely love you may not always know best. It’s an intriguing point to make, but the fact that none of the authority figures who cause the problem in the first place ever reflect on it is cause to wonder whether the filmmakers intended us to notice.

This aside, FROZEN is otherwise fairly inspired. Various elements of Scandinavian lore, including runes and beings specific to regional mythology, are used to strong effect. Ice and show are depicted with great variety and imagination, and if the 3D isn’t strictly necessary, it works well enough.

Overall, FROZEN deserves to be a hot holiday ticket.