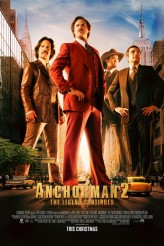 A fun, strange and crazy comedy from the always reliable team of Will Ferrell and Adam McKay 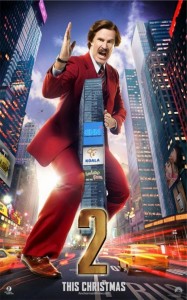 It’s a given that it’s getting harder to create funny mainstream comedies with the bar so heavily skewed in the direction of lowest common denominator crass, potty humor. That kind of humor is the easy way, but something like ANCHORMAN 2: THE LEGEND CONTINUES does things the hard way, trying to create a world filled with word play, crazy situational comedy and some actual satirical moments thrown into the mix. Yes, there’s some potty humor along the way, but its aim is much higher in what it’s trying to say and do.

A sequel to 2004’s surprise cult hit ANCHORMAN: THE LEGEND OF RON BURGUNDY, the new film brings back the entire cast for another go-around. Instead of focusing on 1970s local news and Ron Burgundy (Ferrell) grappling with sharing the news anchor table with a woman (and eventual love interest) – Veronica Corningstone (Christina Applegate), the new film moves the proceedings to the 1980s. News has changed and now, Burgundy isn’t a great fit for network news, but a washed up joke, which makes him a perfect fit for a CNN-esque upstart new 24-hour cable news channel.

He puts the team back together including ditzy weatherman Brick Tamland, dutiful reporter Brian Fantana (Paul Rudd), and yahoo Sports reporter Champ Kind (David Koechner). Any other place, they would be a joke, but Burgundy realizes the key to being successful is not telling the news, but telling the public the news they want to hear.

The film then proceeds to show how Burgundy changes the face of news as we know it – from overt patriotism, an over-reliance on cute puppies to breaking news car chases. It’s a clever indictment of where our news culture has gone and it’s a great subtext to the silliness of the rest of the film.

Like any good sequel, there are many roads traveled that echo events in the first movie. Instead of dealing with 1970s feminist issues with Corningstone (she still plays a big part in the movie), Burgundy must now deal with race relations as his boss at the news network is the proud and black Linda Jackson (Meagan Good). Naturally, romance follows, even when Burgundy doesn’t seem to know when to keep his mouth shut.

There’s also a rival news anchor to contend with as well – Jack Lime played to perfection by James Marsden.

Although terribly underutilized, Kristen Wiig has a pretty small part as Chani, an equally ditzy love interest for Brick. If only there was more of her in the film.

Like most of Ferrell and McKay’s movies, there’s a scattershot quality to some of the jokes and certain things drag on too long. There’s a whole blindness subplot that could have been much shorter and it does take some time for the film to get started, but these are minor complaints.

ANCHORMAN 2 fires on all cylinders throughout for the most part until it reaches the utterly silly and completely deranged finale that features everything from a Minotaur to the ghost of Stonewall Jackson.

Having watched 1987’s BROADCAST NEWS recently, it’s interesting to see the similarities between the two movies – one as an actual film dealing with the deterioration of news ideals in the 1980s as is it was happening, and ANCHORMAN 2 reflecting on it post-script. Both pack a powerful satirical punch, but what still amazes me about BROADCAST NEWS was how prophetic its drama and comedy actually were about where news was heading. Revival houses will have a great double bill with these two movies in years to come, because they should be viewed side by side.

While not a megahit upon its initial release, ANCHORMAN wormed its way into the zeitgeist once it hit DVD and cable. The second movie doesn’t have to claw its way into audience’s hearts as hard. The film manages to be just as entertaining and hilarious as the original and at times, pushes things even further because of its predecessor’s good will.