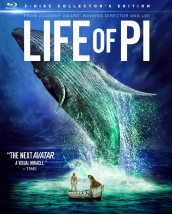 Also reviewed: MULAN/MULAN 2, STORAGE 24, IN THEIR SKIN and more 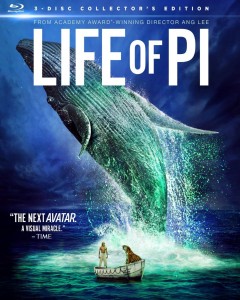 LIFE OF PI – It’s not a secret that LIFE OF PI is probably one of the most visually pleasing films to come out in a long time. Filled with awesome imagery and marvelous CGI technology that really rivals pretty much anything that has come along in some time (not surprisingly called the next AVATAR), there is more here than just the scenery alone. The tale enters around Pi Patel who along his way to Canada on a freighter with his family gets hit by a terrible storm causing the boat to sink. Stranded, Pi (Suraj Sharma) is left along on a lifeboat with a number of zoo animals and soon only a tiger he calls Richard Parker. After the other animals are gone and not wanting to be the next meal for the Richard, Pi spends most of his days on a raft until he somehow feed the beast.

Offered up in both 3-D and 2D versions on Blu-ray it looks remarkable even on the small screen and is a sight to behold. There is also a digital copy and DVD version so you can have the film in pretty much all formats you want. Highly recommended. 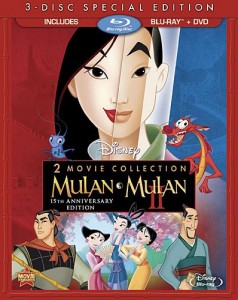 MULAN/MULAN 2 – Disney continues to release its entire catalog onto Blu-ray giving fans the opportunity to own their favorite titles in high definition for the first time. There are a number of releases this week including MULAN/MULAN 2 which may not be the most popular princess among the legions of women that have come along over the years but still has a special place for some. The film follows Mulan who is based on an ancient Chinese legend who breaks tradition and joins the Imperial army. The sequel isn’t nearly as good (as most Disney sequels outside of modern times are) where a newly engaged Mulan has to travel great lands in order to save her empire. Still, remastered using the latest technology the films look probably the best they have maybe ever. 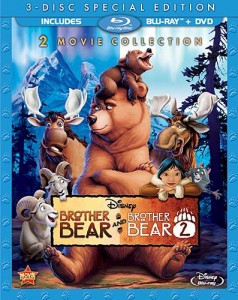 BROTHER BEAR/BROTHER BEAR 2 – Another less popular title that sees a young hunter kill a bear and magically get turned into a bear himself and then hunted by his brother – shades of BRAVE are definitely here. The result is that the hunter learns about not just himself but how nature works and maybe that nature should be wondered at rather than hunted. The sequel, again not nearly as good as the original, but offered up for the first time on Blu-ray (as well as DVD remastered) it might be worth getting if you have older kids that can handle the somewhat emotional and sensitive material. 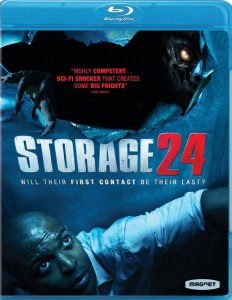 STORAGE 24 – A decent horror flick about a group of unlucky British peeps that get trapped in a storage facility after a plane crashes in London and its classified contents are spewed across the city. What they don’t know is that London is on lockdown after the crash because these contents had something strange inside. Now that something strange is inside Storage 24 and hunting the people within. Not knowing what’s happening outside, paranoia sets in as some of the members begin to show up either dead or go missing and crazy sounds fill the maze-like facility. The British import is cool because it uses lots of old school monster effects and seems to be light on CG and the mood sets the tone. Unfortunately, the storyline and the place setting doesn’t leave for a lot of imagination or creativity and it gets painfully slow at times. But still worth checking out as a rental at least. 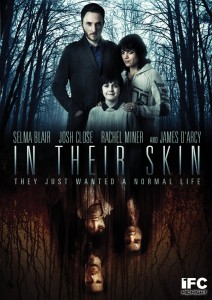 IN THEIR SKIN –IFC has released a couple of horror films this week including this pretty good home invasion gem about a grieving family that comes into contact with a family that has nothing but ill intentions. Showing up on their front door to offer firewood they seemingly invite themselves to dinner at the family’s house and are subjugated to a host of unnerving and odd questions from the visitors. After they leave, it only gets worse as their dog is killed and they take the house over and make the family perform terrible acts. There isn’t anything original here but the production values are good and the acting is solid and that makes all the difference sometimes. Worthy of a rental or Netflix. 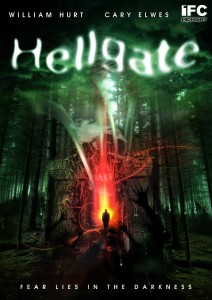 HELLGATE – The second film from IFC isn’t nearly as good as it deals with a slew of supernatural mumbo jumbo about some dude that gets in a car wreck in Asia and afterward can see tortured souls that have not crossed over into the next life. In order for him to stop seeing these creatures he must first come to terms with his own soul being stuck between life and death and that involves him walking some weird ghost gauntlet to get to his dead family that died in the car wreck and let them go. It’s a mishmash of stuff and half the movie is spent on this guy recovering from his wounds in the wreck and seeing ghosts here or there. Not the best out there and you’d be better off with the first IFC film for sure.