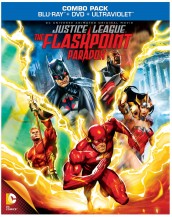 JUSTICE LEAGUE: THE FLASHPOINT PARADOX Highlights this week in Blu-ray and DVD Releases 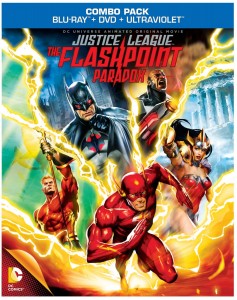 JUSTICE LEAGUE: THE FLASHPOINT PARADOX – In the DC Universe there are a number of different alternative reality plotlines or limited series or films. In fact, DC comics does alternate reality so many times it is hard to keep them all straight from the multiverse to crisis on infinite Earths and everything in-between.  And “Kingdom Come” is simply a brilliant “possible future” storyline. JUSTICE LEAGUE: THE FLASHPOINT PARADOX is a new film that explores yet another possible alternate universe where the world is in complete chaos as a result of one of The Flash’s arch nemesis going back in time and changing everything (or did he?). There are some really good ideas here. Aquaman is a major villain and is fighting against the land dwellers for control of the Earth. At the same time Aquaman is also at war with Wonder Women and her Amazons. Batman is not Bruce Wayne but his father, it was Bruce that was killed in the ally. There is no Flash in this Earth and Cyborg works for the government. Superman has been locked away in a government facility so long he’s a skinny little scrawny dude.

The best thing about THE FLASHPOINT PARADOX is that it doesn’t pull any punches and is very adult. People die. Heroes die. Villains die. Those that were evil actually work on the side of good and vice versa. It is a brutal (pretty much everyone dies) and an interesting switch, which makes it fun. All the while we have the original Flash fighting to fix the timeline and seeing his friends from the real DC universe die and have visions of how things in this world became the way they are. If you are a fan of seeing your favorite heroes in a whole new light this is a must have. 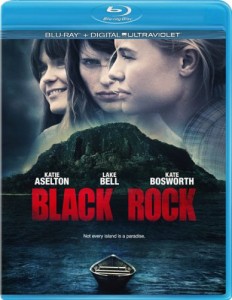 BLACK ROCK – If you took all the horror movie tropes about women, combined them with a slick production and terrible writing and acting, you’d call it BLACK ROCK. The premise is that three chicks (Kate Bosworth, Lake Bell and writer/director Katie Aselton) that really don’t like each other but try to find some common ground go to a secluded island. There they meet some local hunters that happen to be bad boys kicked out of the military. Yeah, you can see where this is going. Men hunting chicks in the woods. Loads of damsel in distress and chicks fighting back points and all the clichés you’d expect. The good thing is that it looks good and the production value is high. Plus, Bell and Aselton get naked at one point. But beyond that, not a lot here that you haven’t seen before in a horror or action film. 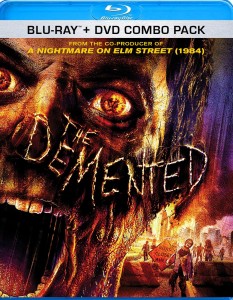 THE DEMENTED – Another sort-of zombie flick without the zombie in the name – meaning no one will check it out because they will think it’s another haunted house flick such as THE CONJURING, THE HAUNTING or the countless others. Regardless, this is an ok zombie flick. A terrorist attack in New Orleans unleashes some sort of chemical agent that transforms every normal person in rabies-type aggression – eating people, killing them and all that good stuff. Six friends hanging out at some house get caught up in the madness when it breaks out and tries to find some means of escaping the entire situation – of course, that doesn’t happen. In fact, the ending here you’ll either love it or hate it. I didn’t like it at all as it left more questions than answers, not about the plague or the zombies but about whether anyone got out alive. But if you have nothing left to watch 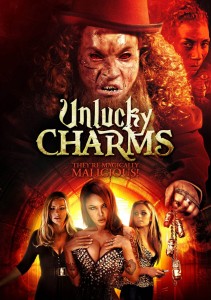 UNLUCKY CHARMS – Full Moon has been famously putting out “puppet horror” for decades with classics from director Charles Band including PUPPET MASTER, HEAD OF THE FAMILY, DOLLMAN, DEVIL DOLLS and well you get the idea. Full Moon has also been putting out a number of other fun horror titles over the years always featuring plenty of babes, blood and bad acting. UNLUCKY CHARMS is a story of a faux AMERICA’S TOP MODEL type reality show where one of the judges just happens to be a card carrying witch and has charms that allow her to avoid growing old. The only trade off is that she must snatch the soul of a pretty girl utilizing a number of strange Leprechauns. But one little guy has a heart and tries to save the female contestants (and others caught in the crossfire) and bring an end to the dastardly witch. It’s silly. It doesn’t take itself seriously and it has Charlie O’Connell in it as a shameless producer. Fun stuff, just don’t bring your brain along for the ride. 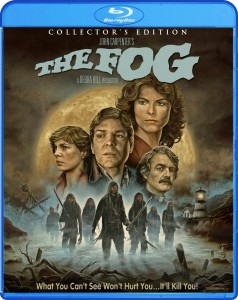 THE FOG: COLLECTOR’S EDITION – Scream Factory is back this month with another pair of cool titles that have been finally transformed into high definition for the first time. The first is the John Carpenter classic THE FOG. I actually had the opportunity to watch not only this on Blu-ray but also the remake as it was showing on a local station recently. The original is so much better it isn’t even funny and surprisingly holds up quite well. The openly scene with the ghost and the ship where it boards an unlucky fishing vessel is still spooky and the acting and reasoning behind the whole film makes so much more sense than a character joining the ghosts at the end or whatever sh** happens in the remake. Plus, how can you not like a top-of-their-game Adrienne Barbeau and Jamie Lee Curtis? Now that it is in high def it makes it that much better and without dated CG effects, it really does hold up quite well. 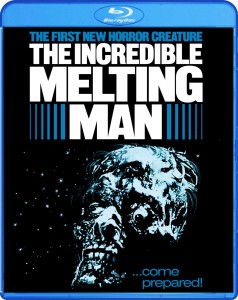 THE INCREDIBLE MELTING MAN – The second film from Scream Factory is an odd duck featuring one of the greatest decapitated head floating down the river scene in maybe cinema history. It also features a number of kids smoking (little kids still in grade school – which could never be pulled off today). For some unexplained reason – my guess is purposely since it’s easier not to explain anything – an astronaut returns home to Earth after getting hit with a solar flare. He then begins to melt – his ear falls off, his eye comes out, his skin melts – and the only way to stay alive is to devour the living cells of, you guessed it, humans. He’s the wackiest cannibal of all time! I’d say they were going for a straight-man’s TOXIC AVENGER but that Troma classic came after this. It’s epically campy and unintentionally hilarious and shows how bad some of the creature films of the 70s were. Still worth checking out if not for the long dude eating a chicken leg being stalked by goo man for 10 minutes. 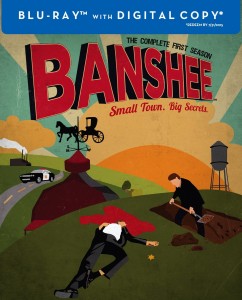 BANSHEE: THE COMPLETE FIRST SEASON – While at Comic-Con this year I saw a whole set up for BANSHEE featuring the Amish mafia and a gambling game other stuff and wasn’t sure about what exactly the show was about or if it would even be something I might be interested in. Then I got sent the Blu-ray and checked it out. Glad I did. This Cinemax series is a lot of fun and has that special brand of Cinemax fake sex and ample amounts of nudity that it fits in well with the channel. An ex-con sets up shop in his former lover and partner’s small town of Banshee. When the soon-to-be sheriff arrives and meets his untimely end at the hand of a local gangster’s goons, the con assumes the identity of the sheriff and brings his unique brand of prison justice to the town. It has just enough brutality and naked people running around that I totally enjoyed it and look forward to the second season. It is produced by Alan Ball – who created and was the showrunner for TRUE BLOOD for most of the early years – so he brings that same style and look to this show but without all the supernatural mumbo jumbo. Definitely worth checking out if you like action and boobs.