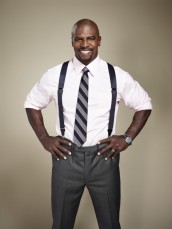 The actor also talks about parenthood and THE NEWSROOM 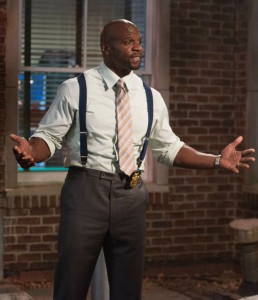 Terry Crews is a man of many talents. Former NFL player, painter, writer, producer and actor – credits include THE LONGEST YARD remake, Chris Rock’s father on the series EVERYBODY HATES CHRIS, TERMINATOR SALVATION and the EXPENDABLES films – the man fromFlint,Michigan feels his most important job is as married family man with five children.

ASSIGNMENT X: You’ve said your BROOKLYN NINE-NINE character has some similarities to you in real life …

TERRY CREWS: Oh, totally. Talking to Mike and Dan, the character’s name is Terry – it’s me. We have one storyline where I let the guys use my minivan, and I really have a minivan [laughs]. It’s a Town & Country. I have five kids. The minivan is the best way to travel if you have a family, period. My thing is, I really like playing against type. I always like presenting what everyone would expect, and then it’s like, “Whoa, I didn’t see that coming!” So it’s been my whole career. But I am that guy. I’ve been married twenty-four years, I have five beautiful kids, I’m a grandfather, and it’s one of those things where they’re going to show a lot of that on the show, because I have my twins and it really affects me [as the character] going out and doing police work, because I care about them so much. So we’re going to grow a lot. But at the same time, I’ve played NFL, I’ve done a lot of things that people have been scared to do, I’m a very physical person, and so it’s one of those things where I live this dichotomy every day.

AX: At least at the beginning of the series, your character talks a lot with the police captain, played by Andre Braugher, and Detective Jake, played by Andy Samberg, about how he doesn’t want to go back out onto the streets …

CREWS: Yeah, there’s some therapy I’ve been going through [as the character]. The thing is, in talking to Mike and Dan, the character is going to go on a journey back into the field. That’s the whole point, is to get him back out, and I think it’s a journey that’s going to be cool. As people stick with the show – they started off right, in that everyone has a place to go. Every character has a place to end up. And it’s about the journey. That’s really what’s going to keep people coming back every week, is that you really care about these people. You want to see what happens to them. It’s not like every episode is all-encompassing and you see everything or it’s all one note. There’s always somewhere to go with each character.

AX: Have you ever had something in your own life that you felt about like Terry Jeffords feels about going back on the street, something that scared you that you had to work through?

CREWS: Oh, yeah. I mean, first of all, the moment you get kids, everything about what you do – you read the news and you’re terrified about what can happen. And so it really affects every decision you make after that. As a single man, you’re like, “I don’t care, I’m going to roll out here,” and now, once you’ve got kids, you’ve got to think about your own mortality, because if you’re not here, what’s going to happen to them? If you’re not here, where will they go, what will they do? And so all your decisions are changed. Even being in the NFL was hard. I had two kids at the time. You think about, “What if I break my neck and I can’t walk? What are my kids going to do?” Those thoughts are always continuously going through your head, and now it’s like, “Do I need to take that flight that I don’t want to take? Because what if it goes down?” Every time you see a plane go down in the news, you go, “Oh, my God, what about their kids?” And so I think that way. And that’s the character – that’s the way he’s thinking. Before, he was just gung-ho super-cop who could do anything. Now he’s got kids. “What if I get shot? What will happen to me if I get hurt or if I’m a paraplegic or if, God forbid, I won’t see my kids grow up?” That is a horrible, horrible place to be, but here, we make it that he’s got to deal with this. That’s his job.

AX: How old were your kids before you let them go out of the house?

CREWS: [laughs] You know what? To this day, I don’t let my kids play outside by themselves. It used to be, when we were kids, we played outside all the time, but now it’s all play dates. We’ll bring over seven kids and we’ll have them parked in the house. But that’s the way it is now, because you have this thing where you’re concerned. You hear the news, you read the news – people taking kids and raising them in the basement until they’re eighteen. Oh, my God. These stories get crazier and crazier, and it’s something that you always have to be conscious of. Always.

AX: You played the Jeff Daniels character’s bodyguard on THE NEWSROOM. Will you be going back to that series at all?

CREWS: I’m not. I couldn’t do it, because I did ARRESTED DEVELOPMENT and then I went and did a movie [the upcoming BLENDED] with Adam Sandler and then I did this pilot, so it was just impossible. [On NEWSROOM], I was just a guest star for the first season. It was a wonderful role, let me tell you, awesome role. It was Aaron Sorkin, and Aaron wrote every word that came out of our mouths and he had me in mind, and I’ve been again blessed to be the guy where, when someone thinks of a character, they’re thinking of me. And then they go, “Wait a minute.” Because this is the truth – until you see me, you don’t even know I exist. It’s kind of a weird thing. People go, “Oh, my God – guys like him can be that way.” And I kind of show them something that they’ve never seen before, and now I’ve been getting more of it, which is really cool. So my big thing is just keep showing people what I can do and keep showing – kind of pushing the envelope, and I think with this show, what you would expect is “cop,” and then you see “family guy.”

AX: Are there any TV shows on right now that you’d like to do besides BROOKLYN NINE-NINE and NEWSROOM?

CREWS: It’s funny, because I’m already on it – ARRESTED DEVELOPMENT. [laughs] You know what? I really like everything. I’m thinking what kind of show would I do. I like NCIS, that kind of show. I like that kind of stuff. I love what LL [Cool J] is doing on his show [NCIS LA], so I would probably do something like a one-hour, maybe that kind of CSI-type show, which would be really cool. But I love the whole thing. I love entertainment and that’s why I try to bounce around, do the EXPENDABLES movies to the comedies to THE NEWSROOM. It’s weird, because I’ve done everything. Now I’ve got an animated movie [CLOUDY WITH A CHANCE OF MEATBALLS 2], so anything I can get in, I’m good.

CREWS: “What’s up” to my wife – we had our twenty-fourth anniversary. She’s my sweetheart.