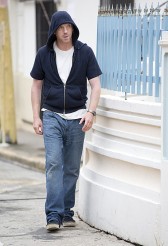 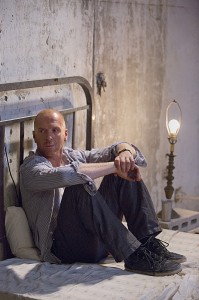 British actor Damian Lewis won an Emmy for his first season as prisoner-of-war-turned-terrorist/Congressional candidate Nicholas Brody in Showtime’s CIA thriller HOMELAND, which airs Sundays at 9 PM. Lewis was nominated again for his second year on HOMELAND, when Congressman Brody is proved to be a terrorist by CIA agent Carrie Mathison (Claire Danes, who won Emmys for both seasons), then is turned into a double agent by the CIA, then resumes his affair with the very conflicted Carrie, then is apparently framed for blowing up the CIA and ends the second season on the run.

Now it’s Season 3. Carrie is in a lot of trouble for trying to prove Brody’s innocence, but this is nothing compared to Brody’s problems. Furthermore, Brody’s family is still trying to cope with the fallout – his teenaged daughter Dana (Morgan Saylor) is recuperating from a suicide attempt and then goes on the run with a shady boyfriend, while Brody’s wife Jessica (Morena Baccarin) is beside herself with anguish.

Lewis seems very happy to still be part of the series, created by Howard Gordon and Alex Gansa, based on the Israeli series HATUFIM, created by Gideon Raff. After a Q&A panel with the rest of the HOMELAND team for the Television Critics Association, Lewis obligingly sticks around on stage for some follow-up discussion.

ASSIGNMENT X: Were you looking forward to a third season of this, or did you have to think it over because you expected to be dead somewhere in second season?

DAMIAN LEWIS: No. I mean, I’m obligated to be here in the third season. I think there’s always been chat about how long Brody would survive, and I think because of the success of the show and the success of that central relationship, they wanted to keep him. But we’ll see. Brody’s a fascinating character. He turns out to be one of the most fascinating characters in the story, without actually being germane to the central plot. The central plot is really CIA, Homeland Security, and how they’ll deal with any ongoing threats to that security.

AX: You were in some movies between seasons …

LEWIS: I made ROMEO AND JULIET; I also made something called THE SILENT STORM, which Barbara Broccoli produced, Andrea Riseborough and I were in. I was playing a Presbyterian minister from the 1950s in Scotland, which is why I had my Pierce Brosnan wig. He’s quite strict and fairly brutal.

AX: You play Lord Capulet in the new ROMEO AND JULIET, directed by Carlo Carlei. Is it very different from the Franco Zeffirelli and Baz Luhrmann film versions?

LEWIS: Certainly it’s different. For one, it’s got Julian Fellowes’ adaptation of the script, so where the original is dense and difficult to understand, then Julian has finessed some “Fellowsian Shakespeare,” just to make it a little more intelligible, and you’ve got the gorgeous Hailee Steinfeld [as Juliet]. She’s still very young, she’s fifteen. They’ve brought all the ages down, so we’re all slightly less doddery than in the Zeffirelli, and it’s got an array of fantastic actors. I think importantly – it’s got Paul Giamatti [as Friar Laurence], Stellan Skarsgard [as the Prince], Natascha McElhone [as Lady Capulet], Lesley Manville [as the Nurse] – they really went to a group of young, very current TV stars – Ed Westwick [as Tybalt], Christian Cooke [as Mercutio], Douglas Booth [as Romeo]. [Booth] looks like an extraordinary Greek sculpture, and Hailee is very pretty and very talented. Hopefully people will like it. It’s certainly done in the romantic tradition. Abel Korzeniowski, who did the score for A SINGLE MAN, did the score for this. It’s different from the one that Claire [Danes as Juliet] was in, very much so. It’s not a reconstruction, it’s not updated, it’s set traditionally in its time. It’s the great love story, forbidden love between children. That plays out a little bit in Dana’s story with [HOMELAND]. She’s troubled, she’s falling in love with inappropriate people and it’s doomed. That’s the thing about ROMEO AND JULIET – it’s doomed. You know they shouldn’t be together.

AX: In HOMELAND, Brody sometimes surprises the audience greatly. Do you ask the writers, “Where am I going, what am I actually doing?” or do you like playing it so that it can be read all different ways at any particular moment?

LEWIS: I do want [to be] increasingly clear about Brody, which I’ve maintained from the get-go. He’s part of a political message in this show, which is, he’s a victim of war, extrapolated to the nth degree. If you send young men out to war, they can come back damaged and they can damage people around them. That’s what has happened to Brody. Brody survives – somehow he survives – but he’s sort of toxic. He affects people around him, he breaks Carrie’s heart, he breaks his own wife’s heart, he breaks his daughter’s heart, he is kept alive at great cost to the CIA, to the intelligence agency. He’s alive at great cost to the political establishment here in the States. And he’s just troubled. But somehow, like a cockroach, he survives. If an atomic bomb was dropped on the Brody household, you’d probably see him just scuttling out in the rubble. Somehow he’s alive, but he infects everyone around him. When we see Brody in Season 3, you will see him at rock bottom. You will see him in an unhealthy position in one of the circles of Hell. And then there will be some sort of recovery that he will affect by himself.

AX: But as far as playing him so the performance can be read different ways – series co-creator Alex Gansa has said that his wife is still sure that, yes, Brody did blow up the CIA …

LEWIS: I think you have to make choices. Towards the end of the second season, I very much made the choice that Brody had been turned back [away from terrorism] by the CIA. Maybe not so much out of an ideology – partly because, well, they had him. They said, “We won’t tell your family.” It was out of guilt and the way he behaved, out of love for his family, he didn’t want to bring shame on his family, he didn’t want to bring shame on the Marine Corps and on himself, so they had him, but also partly because he is compelled by and in love with in some way with this crazy, unhinged, maverick brilliant woman, and they share so much the same energy. So he was prepared to go with her. I think by the time we got to the final episode and that bomb went off, that was information that was released to me actually pretty early on. But I think I made the decision in the run-up to that that Brody is innocent of that. But it remains true that, if they should choose Brody as guilty, they can still play that out. And that’s the brilliance of their scriptwriting. It’s been that way from Season 1 with HOMELAND.

AX: So at this point, you’re playing that he’s innocent of blowing up the CIA?

LEWIS: I believe acting is like advocacy. If you picked up a play in the seventeenth century, at the top of the play, next to the list of characters, it says, “The Argument.” And characters will then argue their viewpoint. I will argue – I can put Brody in the stand and advocate for him all day long.

AX: As an actor, do you have a preference between Shakespeare and HOMELAND?

LEWIS: [laughs] They’re both tricky. It was interesting in last season of HOMELAND – it became operatic at times, which was a switch-up from the first season. Some people didn’t like it. They felt it stretched the bounds of credibility. It certainly became a little more plot-driven. There were big narrative leaps, it was a bit more of a roller-coaster. But as with Shakespeare, HOMELAND doesn’t worry too much about back story, and that’s what’s liberating about playing Shakespeare. It’s pre-Freud. There is no back story. We don’t have to work out what they were all like as kids. Someone comes in, they represent evil, you accept it and then they act in an evil way. Someone represents good. And in HOMELAND, there’s a degree of that. Things happen, we’ve created our own world. It may stretch the bounds of credibility, if you want to pick holes in it, you can, but as long as we commit to the story with great conviction and great relish, then hopefully the story is enough to drive people through and to have people hold onto it, just as you do in Shakespeare.

LEWIS: There are points in Season 3 where you will question whether Brody does want to live, and you will see that.

AX: Does he want to clear his name, is he worried about his family, is he worrying about Carrie?

LEWIS: I think uppermost in his mind is his family, always. But honestly, at this point, if he’s caught, he’s going to the chair. There is so much overwhelming evidence against him and there is such a great need for a scapegoat and for the CIA to make a recovery and for the U.S. President, that fictional president who’s there in the White House at the time, to make a recovery, to bring someone to justice – it’s appalling what happened at the end of Season 2, because it was within the CIA. It went right to the heart of the intelligence community, and I think Brody is just trying to stay alive, and the pressure of trying to stay alive, you’ll see, will make him crumble.

AX: Are you at all similar to Brody?