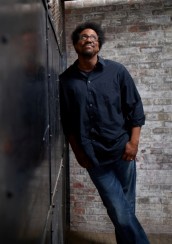 The comic talks the second season pick up, race relations and comedy and responses to the show 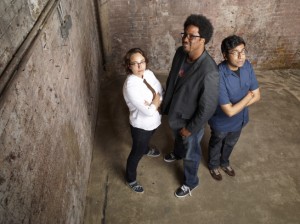 TOTALLY BIASED WITH W. KAMAU BELL is now in its second season on FX, Thursdays at 11 PM. The talk show, executive-produced by Chris Rock, features Bell’s distinctive progressive viewpoint on a variety of political and social issues, along with guests including George Takei, David Allen Grier and Reggie Watts.

At a party thrown by Fox/FX for its talent and the Television Critics Association,Bell moves to a slightly quieter part of the venue to talk about Season 2.

AX: Were you surprised or just gratified when TOTALLY BIASED got picked up for a second season?

AX: When the November election happened, were you prepared for doing the show one way if the President got re-elected and another way of doing it if Romney had won?

BELL: [laughs] A lot of people said, “It’ll be better for you if Romney wins.” I feel like, I prefer “Better for the planet” and I’ll write the jokes accordingly. I was happy that Obama won, obviously – I’m totally biased about that – but also, I have fun with comedy that’s more nuanced than just good versus evil, so we can have the guy that I like in office, and we can actually have productive discussions. At some point during the first season of TOTALLY BIASED, I felt like a lot of it was, I felt like I was on Obama’s campaign committee, and that’s not exactly where I like to live. Especially – he’s not paying me, so …

AX: But I mean, did you have any sort of, “Well, we’ll do this if he gets re-elected and that if he doesn’t”?

BELL: No. We’re always very responsive to what’s happening, so sometimes you try to make some tentative plans in case something happens, but you never know what’s going to happen, you never can predict things, and the election really showed you a lot – you couldn’t predict how that was going to go down. Nobody knew that Romney was going to say in front of people that forty-seven percent of Americans thought they were entitled to things. Nobody could have predicted that.

BELL: Yeah, like food. And water. And niceness. Nobody could have predicted those things about the election. So I think any time with a show like ours, any time you waste predicting is wasted time.

AX: Has the response to TOTALLY BIASED been what you expected, been better, or been different?

BELL: You know, it’s funny. I really limit what I take in about the show. Sometimes on Facebook, I’ll find out things people have said about the show or articles. I was really excited about the fact that the New Yorker wrote a nice profile of the show and so I feel like I am hearing good feedback about the show, but also, in my mind, I know how much better we can be, so I’m excited that people are liking it as it is. It’s totally biased, so it’s not for everybody [laughs], so I mean, we’ll probably never get a hundred percent of people, but forty-seven percent would be great.

AX: Do you get different responses from places where people know you from your live comedy performances, versus places where they don’t?

BELL: Well, I just did a tour when we ended the [first] season. I went to seven cities, and many of them were cities that I’d never been to before. So it was interesting to be in places that [had] people who only knew me from the show. I was in Chicago and in the Bay Area, where they know me as a stand-up. And it’s fun to see my old crowd and my new crowd come together. I feel like the me who is on the show is not exactly the same as the me who is a live performer, so it’s fun to see if the new people will enjoy the other guy, the guy live on stage doing stand-up.

AX: Do you feel like TOTALLY BIASED has found a rhythm yet?

BELL: You know, we’re always trying new things, so I think in a sense, we’re probably maybe not even supposed to have found a rhythm yet. We’re supposed to be still experimenting with it. So there are things about the show – we always know I’m going to do a monologue, so we always know that’s going to be there, and the Man on the Street pieces – if anything on the show has caught a little bit of fire, it’s the Man on the Street pieces of me going out into public and talking to people. I don’t think we knew we would be doing that every week, but we will do that every week, because that’s really a lot of fun.

AX: Do you have a favorite Man on the Street piece we’ve seen so far?

BELL: I think asking people who they would marry if gay marriage was mandatory was a good one. Because gay marriage is legal in New York, but what if it was mandatory? And we really made people think about their sexuality in a different way, so we got to push people into some weird corners. That was a lot of fun for me.

AX: Is there anything coming up that you’re trying that’s new that we should be looking out for?

BELL: One thing we’re doing – in the first thirteen episodes, we brought in a lot of our writers to perform on the show, and we’ve started to bring in more outside comedians. I think it’s a fun place for comedians to come to try out things they wouldn’t normally do. It’s not stand-up, per se. It can be stand-up, but also, they get a chance to put a different perspective out there. [Also], right now, America’s actively in a conversation about guns, and we wouldn’t be doing our job if we didn’t try to enter that conversation comedically. So that’s stuff we’re working on right now. Also, there’s a lot of controversy with the movie DJANGO [UNCHAINED], and I feel like I’m the guy who can go on TV and talk about that controversy in a way that other talk show hosts won’t, so I look forward to talking about that.

AX: How do you feel about that?

BELL: I find myself in the position – I’ve said this to a couple people – I wish I’d enjoyed LINCOLN more and DJANGO less. [laughs] LINCOLN is the movie you’re supposed to like, and it was a good movie, but it wasn’t thoroughly enjoyable, and DJANGO, I had a lot of times I was like, “I shouldn’t really like this, but Quentin Tarantino knows how to make movies.”

AX: We’re aware he’s a white guy and it’s never going to be okay for him to say that word.

BELL: That’s a part of it. One thing about my act that we want to bring into the show is that the human mind has the ability to hold contradictions [laughs] and so you can be like, “I enjoyed this movie – I can’t act like that’s a good thing.” [laughs] So I think that’s the area that I want to talk about on this show, that you can enjoy something – I think right now in society, we get really defensive about the things we like, and if you don’t like what I like, then you’re stupid. And it’s like, “Really?” The things we like are just nonsense. I realized, “I can enjoy this movie, but that doesn’t mean it’s important.” And if they had said “n****r” in it fifty times instead of a hundred, I think I still would’ve got the impression that slavery was bad. [laughs] I still think I’d be going, “I don’t think this slavery thing was that great.” It’s probably going to be his biggest money-maker of all time. You definitely can’t tell anybody it wasn’t a good idea. You can’t tell him it wasn’t a good idea. So, again, it’s holding contradictions.