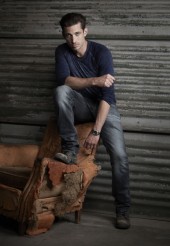 Exclusive Interview: THE MOB DOCTOR star James Carpinello is married to the mob

The actor also talks GANGSTER SQUAD and ROCK OF AGES 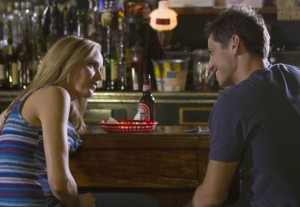 New York-born Carpinello has a healthy Broadway background – he originated the role of Tony Manero in the Broadway musical version of SATURDAY NIGHT FEVER and was the first Stacey Jaxx in Broadway’s ROCK OF AGES (which came before the movie, where Tom Cruise played Stacey). On TV, he had an arc on THE GOOD WIFE and he plays mobster Johnny Stompanato in the upcoming film GANGSTER SQUAD.

At a party thrown by Fox for its talent and the press, Carpinello talks about much of the above.

JAMES CARPINELLO: I feel like I’ve played a string of bad guys lately.

ASSIGNMENT X: Not including Stacey Jaxx?

AX: What about Franco in MOB BOSS?

CARPINELLO: I think the key to Franco is his relationship with Grace. He grew up with Grace, they grew up in the same neighborhood, they were childhood friends, they dated, they clearly have a history, they clearly have a love and a respect for each other, and so if he needs to be ruthless, he’ll be ruthless, but I think at the core, he’s a guy who [is pretending to do] what his dad did, and did what his family’s done, but I don’t think he’s a bad guy.

CARPINELLO: No, I think work is work. The difference in Chicago is that in L.A. orNew York, we could try to build Chicago. In Chicago, we haveChicago.Chicago plays such a big character in the series, so I think the fact that we’re actually there is a real bonus for the show.

CARPINELLO: Have I talked to a mobster?

AX: Are there any people you know who will admit …

CARPINELLO: Without getting too into it, I certainly have a few people on my phone that I’ve known for years that, you know …

AX: So do you just observe them, do you ask them questions?

CARPINELLO: I think it’s a little bit of both. I think that the Mob exists in a different way than it did, certainly in the movies that were super-familiar. I mean, it’s not a bang-bang, shoot-‘em-up world any more. In the age of the Internet, things are a little more under the surface right now.

AX: Did you do any other sorts of research for the part?

CARPINELLO: I read several books, and I’ve had a bit of a romantic love affair with the Mob myself. I’m Italian, I’ve always been a tad bit obsessed with it, I’m a huge fan of all of the Mob movies and read several books prior to being hired to do this, so I have a certain amount of fan-boy fascination with it, and yet it’s not too far from my backyard.

AX: Your character turns out to have quite an interesting relationship with Michael Rapaport’s violent mobster character Paul Moretti …

CARPINELLO: When I read the pilot script, I didn’t know it was going to be Michael Rapaport, and Mike and I actually did a pilot together years ago, a Nick Turturro pilot for CBS. It was a comedy. So I was excited when I found out he was playing Moretti.

AX: Did you see the movie ROCK OF AGES?

CARPINELLO: I did not see the movie ROCK OF AGES and I have no intention of seeing it. The play was written by a really good buddy of mine, Chris D’Arienzo, who is incredible, and everyone involved in the Broadway show did such an incredible job with that play and I have such fond memories of it and it’s continuing to play on Broadway today, four years later.

AX: Did you and Tom Lenk overlap when he was in the show on Broadway as Franz?

CARPINELLO: We did overlap. I love Tom Lenk. He’s a good friend. Tom did ROCK OF AGES in L.A., when it was in a bar. And then he came back and was able to do it on Broadway. He’s great.

AX: Do you have any projects coming up that we should know about?

AX: Did you do a lot of research on Stompanato, who was a real person?

CARPINELLO: I did. Because it was all there – it’s a real story. That was a great experience.

AX: Did you have to have particular hair and makeup to look more like him?

CARPINELLO: The hair and makeup and wardrobe on that movie were so insanely [meticulous] – it was one of those big giant movies where they’ve got a lot of money, and the attention to detail was unbelievable.

AX: Anything else we should know about MOB DOCTOR right now?

CARPINELLO: Just that it’s a kick-ass TV show and Jordana Spiro kills it [slang for “is brilliant”].

TCA 2011: The scoop on Fox’s TERRA NOVA (and the teaser trailer too)
TCA 2011 News: Steven Moffat confirms DOCTOR WHO is “against Hitler”
Exclusive Photos from the JACK AND JILL World Premiere
DANCING WITH THE STARS Season 16 Recap: Sean Lowe kicked off DWTS

Leave a Reply to Amber Redden