Home » once upon a time in wonderland exclusive interview

©2013 ABC/Bob D'Amico
Emma Rigby as The Red Queen, Naveen Andrews as Jafar, Sophie Lowe as Alice, Peter Gadiot as Cyrus, John Lithgow as the voice of The White Rabbit and Michael Socha as The Knave of Hearts in ONCE UPON A TIME IN WONDERLAND - Season 1
Interviews

Exclusive Interview: The creators of ONCE UPON A TIME IN WONDERLAND talk Season 1 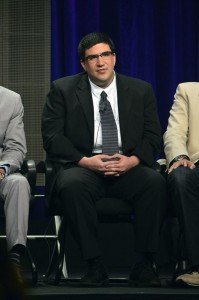 In ONCE UPON A TIME IN WONDERLAND, ABC Thursdays at 8 PM, ONCE UPON A TIME creators/executive producers Edward Kitsis and Adam Horowitz have (with fellow WONDERLAND creators Zack Estrin and Jane Espenson) woven together a story in the same universe as their mothership (now in its third season on ABC, Sundays at 8 PM). We’ve visited Wonderland before with Sebastian Stan’s Mad Hatter and Barbara Hershey’s Queen of Hearts. Those characters don’t show up in the new series, which combines traditional elements from Lewis Carroll’s classics ALICE IN WONDERLAND and ALICE THROUGH THE LOOKING-GLASS with Disney’s ALADDIN.

Here, Alice (played by Sophie Lowe), falls in love with Cyrus (Peter Gadiot), the Genie of the Lamp, with the Red Queen (Emma Rigby) and Jafar (Naveen Andrews) both trying to thwart her

At a party thrown by ABC for the Television Critics Association, Horowitz and Kitsis, both veterans of the network’s LOST, talk about their new show – along with explaining the seeming time paradoxes in both WONDERLAND and ONCE.

ASSIGNMENT X: Was WONDERLAND originally part of the warp and weave of ONCE, and you just moved it aside, or was it a separate idea all along?

ADAM HOROWITZ: It was really the result of when we were first doing the [first] Sebastian Stan episode [where he played the] Mad Hatter, having all these ideas. And then it was like, “What do you think Alice’s story is?” And then we started to realize that the ideas were more than ONCE could handle, that it needed to be its own show, which we then tried to suppress, but we loved the idea so much, we were like, “You know what? We’ve got to do it.”

AX: Who are the show runners on WONDERLAND?

HOROWITZ: We [Horowitz and Kitsis] are running both shows. What we have done is hired Zack Estrin to come help us out in WONDERLAND. He has been there from the beginning and created it with us, along with Jane Espenson, and Zack is enabling us to go back and forth between both shows.

EDWARD KITSIS: Two writers’ rooms, sort of side by side, the ONCE one and the WONDERLAND one.

HOROWITZ: In the same hallway, and we just go back and forth. 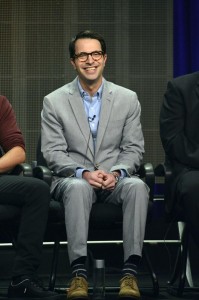 AX: Do you now need to worry about making sure the same idea doesn’t spring up on both shows at the same time?

KITSIS: The shows are both going in very unique directions, so that it would really be shocking to us if the same ideas appeared in both. The storytelling in WONDERLAND is going in one specific direction, which is this story of Alice and her search for her love Cyrus in Wonderland, and on ONCE, we are in Season 3, going to Neverland.

AX: I have a kind of weird question about the Red Queen. Some of her costumes are so odd that they look like they could be concealing a secret. Are we going to find out that she’s part spider or something?

HOROWITZ: She is not part spider. I will give that up. And I will say that is a spoiler. You’re going to see she’s got a lot of costumes that are we think super-cool. We have Eduardo Castro, who is our Emmy-nominated costume designer from ONCE, who’s doing both shows, has just come up with what we think are some amazing creations for all the characters.

AX: Is Jafar going to turn out to be like Mr. Gold, where he’s got something that’s going to turn him into a heartthrob despite his villainy? Apart from being played by Naveen Andrews, of course.

HOROWITZ: Well, he’s Naveen Andrews. How can you not love that man? What’s amazing about Naveen is the amount of charisma and charm that he just inherently has, which is why it’s so much fun to put him in villainous roles. But again, for us, the villainous roles are only interesting if there’s something human beneath it, if we’re seeing how they became a villain, why they do the things, and it’s coming from a human place, a relatable want and need that we can all understand.

AX: How open-ended of closed-ended is this season of WONDERLAND?

HOROWITZ: Well, here’s the thing – however many episodes we wind up doing, which we don’t know what the final order will be for the whole season is, the way it will be done is, we’ll have a run of episodes in the fall, we’ll then go off and this other show will be on for a little while, and then the plan would be to come back and run however many episodes are left after that, so that we would have two unbroken runs of episodes in an ideal situation. Assuming people watch at all [laughs]. What we would love to do is, if people really love the show and love it as much as we do, come back next season and tell another adventure with these amazing characters. But the idea is to tell one story in this first season over however many episodes we wind up doing, finish it, and then at the end of that story, if we want to say, next year Alice and Jafar are on another adventure.

AX: So your opening season is the Alice/Cyrus love story?

HOROWITZ: Love is the franchise of ONCE. And so yes, there will be a lot of that love and romance in this show. The difference, I would say, is that unlike ONCE, where the Snow White/Charming story is designed over multiple seasons, this romance is designed over this season, and then if it continues, it’ll be another [story].

AX: Alice goes back and forth between Victorian England and Wonderland. But is her Wonderland on the same timeline as Storybrooke on ONCE? That is, do Wendy Darling, Doctor Whale, who is essentially Doctor Frankenstein, and Alice all come from the same historical time frame?

HOROWITZ: All right. Here’s the answer. The Darlings exist in our world, the real world, in the past, so Wendy and her family are in historical our world. Doctor Whale and Frankenstein exist in what we call the Land Without Color.

KITSIS: And that, if you remember, was actually Switzerland from the past.

HOROWITZ: Doctor Whale was in fictional Switzerland and we call it the Land Without Color. The Darlings are in historical Victorian England, because they went to a land without magic. ButAlice is very much like Doctor Whale in her ownEngland.

KITSIS: In the fictional realm of Story.

HOROWITZ: But the good news is, when you watch, you will never have to ask any of these questions.

KITSIS: It’s what we call “iceberg,” which is the stuff that’s all beneath the surface, and if you need to have clarity, it’s there, but you can just jump in and watch and just know Alice is going to a Victorian England, she’s going into Wonderland.

HOROWITZ: Her world is unique to her.

AX: What would you most like to say about WONDERLAND right now?

Article Source:Assignment X
Article:Exclusive interview with ONCE UPON A TIME IN WONDERLAND creators Edward Kitsis and Adam Horowitz on Season 1