The actor talks about his character and the city of Juarez 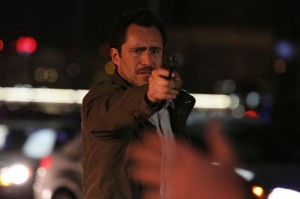 In THE BRIDGE, on FX Wednesdays at 10 PM,Juarez, Mexico homicide detective Marco Ruiz, played by Demian Bichir, finds himself teamed up with El Paso,Texas homicide detective Sonya Cross, played by Diane Kruger, when a murder case spans both their jurisdictions. The case turns out to be horrifyingly personal for Marco, and not just because of his emotional involvement with solving the crime. He also has a complicated family situation that is made considerably more fraught due to the investigation.

THE BRIDGE is based on the Scandinavian series BRON, adapted for American television by BRIDGE executive producers Meredith Stiehm and Elwood Reid, who transposed the Swedish/Danish border to the line between the U.S. and Mexico.

Bichir, who was born in Mexico City, has a list of Mexican film and TV credits dating back to 1977, along with a healthy theatre career. He was nominated for a lead actor Oscar for his work in 2011’s A BETTER LIFE, played Fidel Castro in Steven Soderbergh’s two-part epic feature CHE and had a guest arc on WEEDS.

ASSIGNMENT X: How is the character of Marco Ruiz different for you from other roles you’ve played?

DEMIAN BICHIR: I don’t remember doing a character who speaks so much in English and Spanish [within the same project]. That in many ways is a challenge, because you don’t have enough time, or too much time, to make the switch. Sometimes it’s automatic. And that’s really interesting.

AX: Does Marco switch back and forth depending on how he feels about something?

BICHIR: Sometimes he does. Sometimes, for example, if he’s talking to his son, because that’s something that happens very often, a lot of Hispanic parents, they talk to their sons in both languages at the same time, especially when they’re angry – when we are angry at our kids, we switch to Spanish [laughs], because it’s harder to make a very clear point, so we switch to Spanish. So sometimes, yeah, it happens in the same scene, the same communication.

AX: Would you say Marco is someone who picks his battles carefully?

BICHIR: Sometimes he chooses – sometimes he has a chance to choose, sometimes he doesn’t. I think he chose to stay inJuarez. He could have gone to any other city in Chihuahua – the state of Chihuahua is very big – but he chose to stay inJuarez because he believes that he can make a difference. But within that choice, there are many things that just get out of control. Many times, he can’t really choose. It’s just the way situations are – he has to jump into them.

AX: What made you choose to do THE BRIDGE?

BICHIR: For me, [working with Kruger] was a longtime dream that I had, because I’ve been a fan of Diane’s work for many years. I remember seeing that beautiful shot of Armani cologne when her face when I think she was sixteen. That was striking. And then I found out it was her and I’ve seen her work many other times and I personally love what she did in TROY and then there was this French film that she did … I think she’s a fine actor, not only a beautiful face.

We were actually almost ready to work together on another film. William Friedkin called me and invited me to work on a film that was going to be shot in Belgium this past January. He told me about Diane being attached. And I thought that was going to be a lot of fun. And then, for some reasons, the project didn’t happen. Hopefully, it will in the future. And then when I got the call from Elwood and Meredith to be invited to work on THE BRIDGE, it was not only the script that I loved. I found a really, really strong, well-written pilot, but then more names kept adding to the flavor, to this dish. Gerardo Naranjo [who did the feature MISS BALA] was one of them, this fantastic Mexican director who directed the pilot. And then they brought in Diane’s name and I thought, wow, it was meant to happen. And as I told Diane and Gerardo when we were shooting in the middle of the night on the bridge, “For me, this is it. I don’t know what’s going to happen to this, if this is going to get a green light or not, but just being here on the bridge with you guys, this is beautiful.”

AX: Are you familiar with the city of Juarez in real life?

BICHIR: I know Juarez very well. I have family inJuarez, friends. It’s one of the cities that I’ve visited most throughout my life. Every time we do some theatre in Mexico where we tour around, that’s a stop we have to make.

AX: Do you have input into how Juarez is depicted in THE BRIDGE?

BICHIR: Yes. We have discussions all the time about many things, about many issues, not only places and specific sets and scenarios, but also regarding scenes and the emotions of the characters and even small things, silly things. I bother [Stiehm and Reid] all the time with little things. But that’s the way I believe in any creative process, communication is at the base of it.

AX: Is there anything else you’d like people to know about THE BRIDGE?

BICHIR: Hmm. Don’t take our word for it. If you want to know more about Juarez, visit Juarez. It’s a fantastic city, it’s a beautiful city, a modern city.