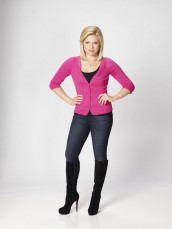 The executive producer and the actress talk their new series 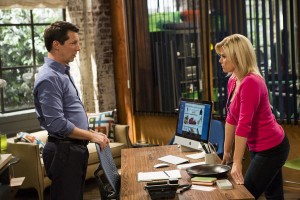 In NBC’s freshman comedy SEAN SAVES THE WORLD, Thursdays at 9 PM, Sean Hayes – also an executive producer on the series — plays the hero of the title. Sean is a single gay man simultaneously coping with suddenly being sole custodial parent of his teenaged daughter Ellie (Samantha Isler) and trying to protect his fellow office workers from their mercurial new boss Max (Thomas Lennon), all while dealing with his opinionated mom (Linda Lavin).

Victor Fresco, who previously devised LIFE ON A STICK and BETTER OFF TED, created SEAN SAVES THE WORLD. He’s at a press event for the series, put on by NBC for the Television Critics Association. Megan Hilty, late of NBC’s SMASH, plays Sean’s best friend Liz. Both are on hand to talk about their new WORLD.

ASSIGNMENT X: Did you create this with Sean Hayes in mind and had you and Sean Hayes and his producing partner Todd Milliner discussed, “Maybe Sean would like to be on TV, see what you can think up?”

VICTOR FRESCO: By the time it got to me, it was, “Sean’s interested in coming back to network television, see what you can think of.” I came up with the bare bones of an idea, just to see if Todd and Sean would like that, and then once they responded to that, you just grow the idea and then you show them a more developed idea and you just take it in stages.

AX: Had you worked with Sean Hayes and/or Todd Milliner before?

FRESCO: No, I’d never worked with any of these people. All new.

AX: Are you the day to day show runner?

FRESCO: Including me, there’s eleven of us, which is about normal for a staff, I think.

AX: How did the concept grow? For example, was his mother always part of it?

FRESCO: Well, it started with the idea of him and a fourteen-year-old daughter, because I liked the idea of a relationship between a dad and a fourteen-year-old daughter. So it started there and then I wanted to give him a workplace and I wanted to give him a boss. So you just start with one premise that you feel is interesting, or one comedic tension, and then you just grow it from there.

AX: Did you have Linda Lavin in mind to play Sean’s mom, or was that a suggestion, or did anybody make her read for the role?

FRESCO: It was a suggestion. I did not have her in mind when I wrote it. And once we started casting, she was kind enough to come in, but halfway through her read, she got the job [laughs], because she was the first person she looked at, because we were excited to see her, and we hired her immediately.

AX: Ms. Hilty, how did you become involved with the series?

MEGAN HILTY: Backstage West. I answered an ad in Craigslist [laughs]. No, it was an audition that came up. And I like working. I love Sean [Hayes had been a guest star on SMASH]. I loved this script, so I just crossed my fingers and hoped that they said yes.

AX: You just came off a big TV musical drama. How do you enjoy the pace of production on a sitcom versus drama?

HILTY: It’s pretty awesome. I’m so excited about this. This is all I’ve ever wanted to do. I’m really excited to be doing a complete one-eighty from my last job. I love making people laugh. I love having a good time. And so I am really excited about the differences in this job from my last one, because I can always go do concerts and sing other places. I don’t have to be singing in every job that I do.

AX: How does Megan Hilty’s character Liz fit into the story with Sean?

FRESCO: Their back story is they’ve known each other for fifteen years. We have said they met because [Liz] was the caterer at Sean’s wedding and knew that he was gay and said, “What are you doing?” And Sean was not ready to come out at that point. So they have a lot history. So they have a long history. And that history allows them to be good friends. And so there will be the tension in the show of, who’s the surrogate mom to the daughter? Is it [Liz], who is a little wilder, still single? Or is it Sean’s mom? Sean has a lot of experience with the mom, may not want that as the surrogate mother to his child. So there will be some tension between those two characters also.

AX: But is Sean afraid Liz may get his daughter Ellie to be a little too wild too early?

FRESCO: Yes. So there is that tension. And I think one of the premises of the show is, Sean has gone from a weekend dad to now a full-time dad, which is a lot more responsibility. So he has to learn, “How do I discipline this daughter? And I’m not necessarily the run weekend guy any more. I have this whole responsibility. And who’s that female presence?” So yes, I think that is going to be a big piece of the tension in the home. And then at work, Sean also has a new piece in his life, which is a new boss, a new owner of the company. So he’s got to try and navigate that, too. And then there’s also the tension of, “I want to be in two places at once.” This is something I think a single dad would feel. I think even an evolved 2013 dad feels, because we’re not 1950 dads any more, is wherever we are, we feel like we should be someplace else. Often when I’m working, I feel like I want to be home with my family. And when I’m with my family, I feel like I’m not getting the work done. So I think that’s also a tension of the show and a tension for Sean’s character, which is heightened because he also doesn’t have anyone at home. He doesn’t have a wife at home who’s taking care of his kid.

AX: Will we see Sean dating?

FRESCO: Yes. His focus is on his relationship with his daughter. That’s the big new thing in his life, and that’s where he’s going to be spending most of his time and energy and making sure he gets that right. But yes, he is a single man, and he will be dating.

AX: Are any of the other regular characters gay?

FRESCO: Let me think for a second – no.

FRESCO: I’m not sure. [Lennon] has alluded to a Bond villain before. That’s all scripted – it’s not scripted as a Bond villain, but he does bring that into the performance.

AX: Is the character doing that deliberately?

FRESCO: No, I think that’s just who he is.

AX: And what are your comic inspirations? What were the shows where you went, “I want to write stuff like that”?

FRESCO: Well, when I was real little, it was GET SMART, and then coming up, it was a lot of the NBC comedies. It was CHEERS and FRASIER and SEINFELD and FRIENDS – MALCOLM IN THE MIDDLE I thought was a great show, ALL IN THE FAMILY was for me a very influential show. Most of them were multi-camera when I was coming up, that really inspired me to want to do this.

AX: What would you most like people to know about SEAN SAVES THE WORLD?

HILTY: It’s hilarious. And it’s the most insanely talented group of people you’ll ever encounter.