Exclusive Interview: Sasha Roiz on the return of GRIMM Season 2 and more 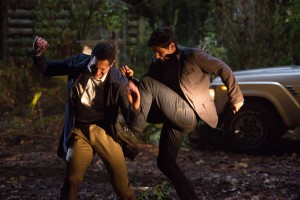 The second half of Season 2 of GRIMM picks up next Friday at 9 PM on NBC. It promises to be quite eventful. Nick Burkhardt, played by David Giuntoli, is a Portland,Oregon police detective who is also a “Grimm” who protects humans from supernatural “Wesen,” and sometimes vice-versa. This dual calling gives Nick plenty to do on a regular day, but he’s just found out that the love of his life, Juliette (Bitsie Tulloch), has not only been put under a spell that prevents her from remembering him (he’s known that for awhile now), she’s been supernaturally attracted to Nick’s boss, Captain Sean Renard, played by Sasha Roiz. Furthermore, Nick has just learned what we viewers have known for awhile now, which is that Renard is himself a Wesen.

Roiz, the Montreal-born actor who plays Renard, has an extensive resume in theatre, films and TV, including THE DAY AFTER TOMORROW, LAND OF THE DEAD and a series regular gig on CAPRICA. At a party thrown by NBC for the press, he obligingly steps to a quiet corner so he can talk about playing his half-Hexenbiest, currently bespelled officer of the law on GRIMM.

ASSIGNMENT X: Were you surprised or just gratified when GRIMM got picked up for a second season?

SASHA ROIZ: I was thrilled, as were all the cast. We suspected that it was favorable for us, because when we got the back half and the ratings were good, the fan base kept growing, so we felt confident that chances were good, but it’s always a wonderful validation to get the official word, so we’re all very thrilled.

AX: A lot of the names for Wesen on GRIMM are plays on German terminology. “Renard” is a French word for “fox,” so does that play into the character at all?

ROIZ: He certainly is wily – or is that a coyote? Foxes could be wily. Shrewd or … what do they say, what’s the adjective for foxes? Sly. He is a sly one. 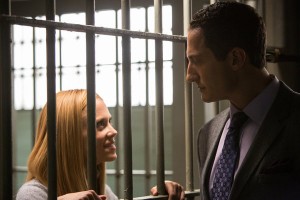 AX: It’s now been established that Renard is part Hexenbiest …

AX: So the Royals are something else?

ROIZ: No, the Royals are human, but I just happen to be of Royal descent, but I’m still half-Hexen.

AX: And that to be the illegitimate side?

ROIZ: That’s the illegitimate side, yeah.

AX: When we see the Hexenbiest side of Renard, is that CGI, or have you ever been in prosthetics makeup for that?

ROIZ: No. I’ve only done it through CGI. I haven’t had to do prosthetics – the only prosthetics I had was for injuries. There are a lot of fights going on, a lot of battles, so it’s bruises and cuts and so on. That’s the only kind of makeup I’ve had.

AX: He’s certainly furious with her now, but do you think Renard ever had any fondness for his ex Adalind, or was she always a means to an end?

ROIZ: I think Renard plays his cards so close to the vest that I think it’s really hard to say whether he has genuine emotion for people. I think he is someone who, even if he does, he will push them down very far, because he is a person who is logical and pragmatic first and foremost, and probably suppresses any emotion.

AX: Renard seems to be in a tailspin about the spell he’s under that is compelling him to be crazy about Juliette. Actors are often called on to play uncontrollable rage, but you’re playing uncontrollable …

ROIZ: Shirtless rage. I was joking around on Twitter and I hashtagged “shirtless rage” about the original scene where I took the potion, and it was just a joke, because the whole thing was so gratuitous, and then people just kind of ran with it, and it’s still out there. People just seem to get a real kick out of it.

AX: Is this the first time you’ve been considered a major sex symbol?

AX: And how is that?

AX: How does Renard feel about all his attraction to Juliette?

ROIZ: I think he is absolutely distraught by it. He has been so good at keeping himself a secret, keeping his plans secret, and plotting along the way. And he’s been very calculating. To all of a sudden lose all control and to jeopardize all the plans that he’s been setting up – it’s incredibly frustrating and terrifying for him. And so I think he would do anything to stop this romance or this infatuation, I should say. Because it’s jeopardizing his entire future. When it comes to Juliette, the potion has taken over, and it’s undone us both. It might ruin our lives, our ambitions, our aspirations. The feeling is absolute and complete infatuation, which prevents him from thinking straight, which prevents him from just living his life the way he’s known up ‘til now and being in control of his own life.

AX: Have you ever had something that’s kind of taken control in your real life, where you’ve thought, “What the hell am I doing?”

ROIZ: Never to that extent, but I can only imagine – this is the kind of stuff that leads people to kill each other and to put each other in tremendous danger and hazard, and I think, as you will see in the next episode, that’s where it’s headed. It’s headed to a very dangerous place, because we are both absolutely overwhelmed by it and determined at the same time to resist it, so it’s become a very dangerous combination.

AX: In the trailers for the next episode, it looks like you as Renard and David Giuntoli as Nick have quite a physical confrontation.

ROIZ: Yes. A huge battle between Renard and Nick.

AX: Did you have time to prepare for that, or was it all choreographed on the day?

ROIZ: No, no, we prepared. It was a very arduous and very long choreography, and it’s going to look spectacular. And I think the fans deserve it – it’s been a long time coming. They’ve been anticipating Nick discovering about me and confronting me, and so it’s a very epic battle and I look forward to seeing it.

AX: Do you think before all this happened that Renard always imagined he could keep the fact that he’s a Wesen a secret from Nick?

ROIZ: Yeah, I think that he’s quite confident that he’s able to keep most of his life and most of his ambitions a secret. That’s how he conducts himself.

AX: We’re about to embark on the second half of Season 2, but do you have a favorite episode or scene from Season 1?

ROIZ: I loved the coins episode [“Three Coins in the Fuchsbau”]. I got to play a lot in there and reveal a little more of myself. I liked the finale very much, but I’m really excited about what’s coming up. It’s even stronger, even more intense. We really reveal a lot about all the characters.

AX: You had a nice scene of badassery there where two guys pulled guns on Captain Renard and he shot both of them.

ROIZ: Yes. One of them was my cousin, no less. Yeah.

AX: Do you enjoy it when that side of Renard comes out?

ROIZ: I love it. It’s so much fun. It’s great – especially for a character who’s so methodical and very calculating, to break out of that and just be very aggressive and visceral.

AX: You’ve done Comic-Con on behalf of GRIMM. How was the rock star experience?

ROIZ: I’ve done Comic-Con a few times, and it’s always remarkable. The second season of GRIMM, when we came back to Comic-Con as a veteran show – I think we were all absolutely rocked by the reception, because the first year, we were in a room with a few hundred people waiting to see us, mostly on behalf of [creators/show runners] David Greenwalt and Jim Kouf and their resume, but this year was remarkable. Thousands and thousands of people, huge fan base. We just hope that it continues to grow.

AX: Before GRIMM, you were on Syfy as a regular on CAPRICA and a recurring character on WAREHOUSE 13. Do you feel like you’ve sort of been embraced by NBC/Syfy as an actor?

AX: Does this make you feel a little more secure in terms of ongoing employment?

ROIZ: I’m certainly less anxious this year, but talk to me at the end of this season and we’ll see where we stand [laughs], but for now, I feel quite good.

AX: This past summer, you did a small role on Season 2 of your CAPRICA colleague Jane Espenson’s Web series HUSBANDS, which features your CAPRICA costar Alessandra Torresani. How was that experience?

ROIZ: They’re great. It’s always fun to work with Jane and the gang.

AX: How is it working on a production that small?

ROIZ: It’s fun. It’s just a laugh, because it’s a lot of friends just hanging out, so it’s not really work, it’s a reunion.

ROIZ: No, nothing upcoming. I had a film in South by Southwest [Film Festival] called EXTRACTED, which is a beautiful little indie sci-fi thriller, and that’s doing the rounds on demand I think all over the world. I’m getting some very good response, and I did another episode of WAREHOUSE 13. But most of the time is very occupied with this show.

AX: What would you most like people to know about GRIMM coming back now?

ROIZ: That it’s only getting more intense and more complicated and more fun.

Leave a Reply to Mandy