The actor also talks about his new play BILLY AND RAY 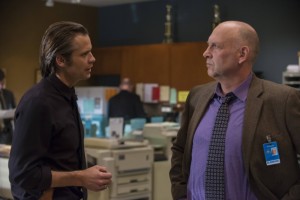 On FX’s JUSTIFIED, which has its fourth-season finale Tuesday at 10 PM, Timothy Olyphant’s Deputy U.S. Marshal Raylan Givens gets to do most of the flashy stuff – shooting people, romancing women, trying to outsmart his old frenemy and current Harlan County crime boss Boyd Crowder (Walton Goggins). However, the tone of the show wouldn’t be the same without Raylan’s world-weary, incredibly sensible boss Art Mullen, played by Nick Searcy.

Searcy’s IMDB page lists 95 film and TV acting credits, including some big projects like MONEYBALL and THE FUGITIVE, plus PARADISE FALLS, the 1997 feature Searcy wrote and directed. TheNorth Carolina native also does a lot of stage. At a party thrown by Fox and FX for their casts and creative teams and journalists at the Television Critics Association press tour, Searcy relaxes on a couch and talks about Art, plus the play he’s doing right now.

ASSIGNMENT X: Without getting too spoilery, can you say what’s up with Art this season?

NICK SEARCY: Well, Art’s facing kind of a turning point in his life. There’s a mandatory age limit for a Chief Deputy Marshal and Art’s coming up on that, so it’s hard to tell how he’s going to handle it – if he’s going to appeal it, what he’s going to do. And there’s also an overarching mystery the whole office is dealing with.

AX: Do we get any more of Art’s back story?

SEARCY: Well, I don’t want to give too much away – I’ll just say yes [laughs].

AX: Does any of this involve flashbacks? Do you deal with wigs or anything like that?

SEARCY: [laughs] I have asked for them, but not in terms of flashbacks. I’ve asked for Art to be able to wear a toupee, but so far, the writers haven’t gone for that.

AX: They don’t think that’s something Art would do?

SEARCY: Nah – I’m trying to pitch, “Art has a midlife crisis and gets a toupee and goes on a drinking binge and sleeps with a bunch of different women.” So far, the writers aren’t responding to that pitch. I don’t know why.

AX: Seriously, do you get to pitch things that Art might do to show runner Graham Yost and the writing staff?

SEARCY: Yes, certainly. Yeah, there is actually something coming up this year that I did have a little idea in the arc of.

AX: How did you feel about the seasonal arc last season with Neil McDonough as the Detroit mobster and Mykelti Williamson as the patriarch of Noble’s Holler?

SEARCY: I thought it was a great season, a great year. I think that it was kind of – the whole big bad guy theory of JUSTIFIED. I think we went as far with that as we could go, and we’re going in a different direction this year.

AX: Do you like the way they’re shooting greater Los Angeles County or Ventura County for Harlan County, Kentucky?

SEARCY: Oh, yes. They’re very clever about it. Lots of night shoots and lots of interiors. They do a pretty good job of masking where we really are.

AX: What other projects have you been working on?

SEARCY: Well, I’ve got my own show that I’ve been doing, called ACTING SCHOOL WITH NICK SEARCY, which you can find on the Web at nicksearcy.com. We’re putting up an episode every two or three weeks.

SEARCY: It’s a reality show about my life. I like to call it a public service. It’s just my way of giving back to all my fans.

AX: How are you enjoying making stuff for the Web? Is that a new experience?

SEARCY: Yeah. It’s great fun, we have a terrific time of it. My partner Chris Burgard and I, we just come up with it ourselves and we have a lot of autonomy, and when we get one, we put it up. It’s like having your own studio. It’s great.

SEARCY: I’m actually doing a play [at the Falcon Theatre in Burbank, California, in previews now and opening April 5] called BILLY AND RAY, about Billy Wilder and Raymond Chandler writing DOUBLE INDEMNITY together. I play Raymond Chandler. The play was written by a good friend of mine, Mike Bencivenga, and we’ve been trying to get it put together for a couple of years. We did a reading of it earlier this year with Kevin Pollak as Billy Wilder, and Garry Marshall picked it up and is directing it himself at his theatre.

AX: Anything else you’d like people to know about JUSTIFIED this season?