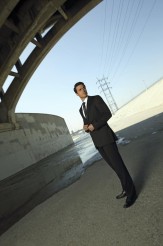 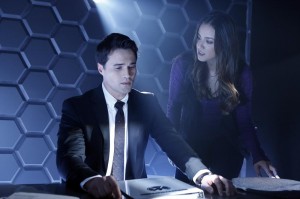 In MARVEL’S AGENTS OF SHIELD, the new ABC series that premieres Tuesday, September 24 at 8 PM, we follow the non-superpowered but still heroic team that deals with the fallout of a world where actual superheroes and monsters exist. In SHIELD, created by Joss Whedon & Jed Whedon & Maurissa Tancharoen, based on Marvel material, Agent Phil Coulson (Clark Gregg) – the audience knows, though he does not, that there’s more to his “near-death” experience than meets the eye – is in the midst of assembling a new team. One of his first picks is Grant Ward, played by Brett Dalton.

Dalton, a native Californian who attended Yale School of Drama, can also currently be seen as Robert Todd Lincoln in the History Channel’s telefilm KILLING LINCOLN. S.H.I.E.L.D. agent Grant Ward is his first series regular role. Even by the spoiler-phobic standards of current series television, SHIELD is shrouded in high-level secrecy (not unlike the agency it portrays).Dalton says he doesn’t mind this aspect of his new job at all.

“I sort of like keeping secrets,”Dalton relates. “I don’t know if that makes me weird or whatever, but I’m weird. I just think it’s a great reveal. It wasn’t that difficult for me to keep a secret, but Marvel security made sure those secrets stayed on set like you wouldn’t believe.”

Unsurprisingly, Dalton is not too forthcoming with plot details, but at a party thrown by ABC for the Television Critics Association, he’s happy to say what he can about super new gig.

ASSIGNMENT X: Were you a Marvel fan growing up?

BRETT DALTON: I most certainly was, yeah. I’m not somebody who jumped on the bandwagon late – I’m actually somebody who was a fan since I was a kid. I still have full sets of action figures in their boxes, their original packaging. So I used to go [to the comic book store] with my dad once or twice a week. And it’s kind of crazy to be part of that universe in such a real way that I get to do this every day.

AX: Were you familiar with Joss Whedon’s work at all before this?

DALTON: Yes, I was. Since BUFFY. So it was crazy. It’s a dream come true when you get a script like that and then – but then again, it’s Joss Whedon.

AX: What is your favorite part of the mythology?

DALTON: Oh, I don’t know. That’s a good question. Just the Marvel mythology in general? There’s this saying in theatre, which is, when you’re playing a king, try to find the man in the king, and try to find the king in the man. So I think what’s so great about superheroes is that when you find that they’re actually human, and they actually have vulnerabilities and weaknesses, that makes them relatable. Superheroes are the kings and to find the man, like the humanity in those gods and monsters is what makes them so appealing. We are playing real people who are dealing with kings and monsters and superpowers. So I feel like we live up to our tagline, “Not all heroes are super.” We have specialized skill sets and we deal with events that are bigger than us, but you’re seeing very real humans deal with events and powers that are very superhuman.

AX: What is your sense of Ward as a person, as a character?

DALTON: Well, I didn’t want to work with S.H.I.E.L.D. actually, I was Coulson’s first recruit and he thought that I should be a part of this team. I was used to working alone. So my whole thing is that I’m going in being a part of the team and I have to sort of trust that this guy picked the right person for the job, because initially, I really don’t think so – I’m like, “Why did you choose me?”

AX: Why do you think he was doing bomb disposal before he got into S.H.I.E.L.D.? Is he a thrill-seeker, does he feel like he’s protecting the people around him, does he have a death wish …?

DALTON: I don’t think he has a death wish – I think he believes in the world as a place worth saving and the common good of man and humanity. And I think that he believes in, ultimately – it’s going to sound weird, but world peace.

AX: Did you have to learn how to do anything for this part, like ride a motorcycle, shoot a rifle …?

AX: Did you go off to learn on your own time, or was there somebody on set to go, “You do it like this”?

DALTON: Yes, exactly. They helped. I didn’t know how to ride a motorcycle beforehand, for instance, but I did learn a lot in order to do those scenes. And the same with all of the handling of guns and stuff like that, too. They want me to look good as much as I want to look good.

DALTON: Riding a motorcycle actually was relatively easy – I picked it up in about three hours in a parking lot. I know how to drive a stick-shift car, so it was quite similar. And then the rest of the stuff – Fight training, I’ve done some of that stuff before, but this was still much more intense, and for film, which is different than theatre fighting.

AX: And how much of the fighting do they let you do?

DALTON: All of it [laughs]. All of it. As I said, they have infinite faith in my abilities.

AX: In the pilot, under unusual circumstances, Ward tells Chloe Bennet’s character Skye that he finds attractive. If it’s not too much of a spoiler, going forward, are we going to see the after-effects of that?

DALTON: It may be referenced in another episode, but I can’t tell you much more than that. But they have a great relationship, both of them, because in many ways, they’re polar opposites. Her skill set is the exact opposite of mine. I lack people skills and she can just walk right up to somebody and start a conversation. So where I have gaps in my skills, she has all of the strengths. So that lends itself to a lot of being challenged by that other person, but also in a strange way, they compliment each other as well. It’s an interesting dynamic. I’ve never met anybody like her.

AX: You have an MFA in theatre from Yale. Have you done a lot of Shakespeare?

DALTON: Yes, I have. I played Macbeth at Chattaqua my second year in grad school, and I’ve done quite a bit of Shakespeare. I’ve been in MIDSUMMER twice as Demetrius. Yeah, I’ve done the legit theatre training. I’ve done it all – Chekhov, clown.

AX: Have you done any of the Shakespeare readings at Joss Whedon’s house?

DALTON: No, I just met him with the show. I hope he invites me.

DALTON: I do, actually. I’m in a film called BESIDE STILL WATERS – it’s an indie film and it will be premiering in October [on the film festival circuit]. It’s the great reunion piece a la THE BIG CHILL.

AX: Is there anything else you’d like to say about MARVEL’S AGENTS OF SHIELD?

DALTON: We had as much fun doing it as it seems people have watching it, so we are happy to share this with the world and we cannot wait to show you what we have for Episode Two.