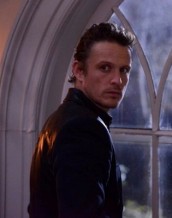 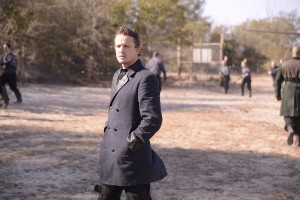 NBC’s REVOLUTION concludes its first season Monday night at 10 PM; it has been renewed for a second year. In the series created by Eric Kripke, we’re in a near-future where electrical power has been absent for fifteen years, though some very bad people have now gotten hold of it. A band of rebels, including Miles Matheson (Billy Burke), is fighting against the depredations of the Monroe Republic.

David Lyons plays Sebastian “Bass” Monroe, head of the Monroe Republic and a former friend of Miles. He has an army and working helicopter gunships – what he doesn’t have is emotional stability.

In contrast to his character, Lyons, who originally hails from Melbourne, Australia, seems amiable and well-balanced. The actor played Dr. Simon Brenner on twenty-seven episodes of ER, had an arc on THE CAPE, appeared in the feature EAT PRAY LOVE opposite Julia Roberts and starred in the musical fantasy short MY MIND’S OWN MELODY. At a party thrown by NBC for the Television Critics Association, Lyons talks about playing REVOLUTION’s driven antagonist.

AX: When you went in to audition for Monroe, what did they tell you about the character?

DAVID LYONS: They didn’t really tell me much, because there wasn’t that much in the pilot. But I spoke with Eric Kripke, and they told me about the relationship between Miles and Monroe. And that is what sold me on it. That was when I thought, “There’s something here, there’s something in here to grab onto.”

AX: Before this, have you played anybody as ambitious and villainous as Monroe?

LYONS: Perhaps not as ambitious, but certainly as villainous. There’s a real sort of dichotomy or paradox in Monroe, which is there is a lot ambition, there’s a lot of villainy, but there’s a lot of hurt and anxiety and I think the great thing about playing him is the fact that he’s so extreme in all of his emotions. That’s what makes it so fantastic to play as well, is that no one actually tries to be evil. And Eric [Kripke] has done that well in that he’s shown so many dimensions to each of the characters – all of us, but Miles and Monroe were once on the same team, went on divergent paths, and I think it’s just a fascinating premise the way he’s working it.

AX: Giancarlo Esposito is a very powerful actor, but as Monroe, you have to dominate his character Tom Neville. Is that tough to do?

LYONS: Yeah, of course. No one can dominate Giancarlo. But the thing that I constantly remember is they’re working from different [motivations]. For him, it’s about the greater good of the Monroe Republic, but for me, it’s about Miles, and it’s about the friendship that I had, so we’re actually not working from the same place, so it’s kind of a different thing.

AX: Do you get to go up in the helicopters with the gun turrets?

LYONS: Yes, I do, I get to if I want to, because they’re mine. But it’s imprudent as well for the general to be on the field, so he’s kind of sitting back.

AX: As yourself, David Lyons, do you want to go up in the helicopters?

AX: Had you worked in North Carolina before doing REVOLUTION?

LYONS: Yes, actually, I have. I did one film directly before we shot this called SAFE HAVEN [which was released theatrically in February].

AX: Is North Carolina what you thought America would be like before you came here?

LYONS: Well,America to me is like a very, very rich tapestry, and so I never thought that there would be one type of American, nor one place in America that defines America. What’s amazing about Wilmington is that the people are so gracious, they’re so beautiful, they’re really lovely and loving people.

AX: What would you most like people to get out of REVOLUTION at this time?

LYONS: I guess the overriding theme in it is family, and I guess the return to a much simpler life and a life that is all about true connection between individuals, and I think that’s the most important aspect of the show.