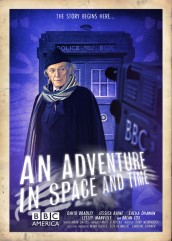 ©2013 BBCAmerica
AN ADVENTURE IN SPACE AND TIME
Interviews

Exclusive Interview: David Bradley on AN ADVENTURE IN SPACE AND TIME and being the first Who – PART 1 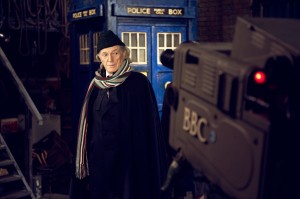 David Bradley in AN ADVENTURE IN SPACE AND TIME | ©2013 BBCAmerica

British actor David Bradley has just hit a fandom trifecta (there isn’t a the fandom trifecta – there will never be just three): he was the unhappily non-magical custodian Filch in the HARRY POTTER films, he continues as the indelible Walder Frey, host of the Red Wedding, on HBO’s GAME OF THRONES, and now he’s part of the DOCTOR WHO universe.

Once upon a time, hard as it may be to recall and longer ago than many Whovians have been alive, DOCTOR WHO quite simply did not exist. It was brought into being in 1963 by a team including producer Verity Lambert, director Waris Hussein and actor William Hartnell, who portrayed the First Doctor. AN ADVENTURE IN SPACE AND TIME, premiering in the U.S. on BBC America Friday, November 22 at 9 PM, chronicles the beginnings of DOCTOR WHO, starring Bradley as actor Hartnell, with Jessica Raine as Lambert and Sacha Dawan as Hussein. The special is produced by current DOCTOR WHO and SHERLOCK makers Steven Moffat and Mark Gatiss from Gatiss’ script, with Moffat making a rare acting appearance as Tom Baker.

Bradley is at BBC America’s Television Critics Association and takes some time to talk about both ADVENTURE and BROADCHURCH, which aired in the U.S. earlier this year. The murder mystery starred previous DOCTOR WHO David Tennant, plus Olivia Colman, and was created by yet another Whovian veteran, writer Chris Chibnall. Bradley played Jack Marshall, a newsstand vendor with a tragic secret. FX has just announced that Bradley has been cast as vampire hunter Abraham Setrakian in its TV series adaptation of Guillermo Del Toro/Chuck Hogan’s THE STRAIN

Bradley graciously takes some time to chat about journeying back into the past to play the man who was the First Doctor – as well as portraying Frey, arguably the world’s worst host.

AX: Were you a DOCTOR WHO fan when you were a kid?

DAVID BRADLEY: Yes, I was. I remember seeing William Hartnell and Patrick Troughton and Jon Pertwee and Tom Baker. I’d go to work and we’d talk about it and the Daleks and we’d all try to do the voice, but it wasn’t like I never, ever missed an episode. I’ve never been that kind of full-on into it, like I just can’t miss it – I’ve never been like that, but I’ve always enjoyed it. I never imagined I’d be in it.

AX: With playing the scenes recreated from the original DOCTOR WHO with William Hartnell as the Doctor, did you try to do specifically what he had done, or did you try to just get the feel for the period?

BRADLEY: No, well, I didn’t think about the period so much. We just looked at endless footage on DVD of the actual episode we were recreating, through the old camera with that wonderful black-and-white grainy feeling that you can’t get with a modern camera. Our cameras were filming them filming us, so we felt it necessary to recreate every move, every camera move and every actor’s move exactly as in the episode. Because there will be some fans maybe checking it out – I’m sure a lot of them go back and look at old episodes. If you’re really into it, you go back and see how it’s done. And so we felt we had to do it justice by recreating it exactly. As far as the character of Hartnell is concerned, we didn’t have any record of him speaking as himself or interviews, things like that, so you just had to try and do the scripts justice and use what was in his life and try and be as truthful as possible. You can’t put everything in, every aspect of his life and character, because in the end, it’s not about William Hartnell, it’s a drama about the making of a program and how it came about.

AX: Had you ever worked with the real Waris Hussein, who’s been a very prolific director, especially in Britain?

BRADLEY: No. I just met him on the first read-through of ADVENTURE IN SPACE AND TIME with William Russell and Caroline Forbes from the original cast and talked to them all. They were very helpful and it was just great meeting Waris, because he watched on the monitor as we were shooting the first scene when the Doctor is walking down the corridor with the flapping cloak and the checked trousers and the boots. It’s a tracking shot and he was watching on the monitor. I think that was the first scene we shot. And Mark Gatiss was stood next to him. He looked down and just saw tears streaking down. He just obviously went back to fifty years ago, when he directed it. I can’t imagine what that must be like, seeing yourself portrayed from all that time ago.

AX: Have you always been an actor?

BRADLEY: After leaving school, I was an engineer for about eight years, working on the factory floor. I wasn’t very good at it, my heart wasn’t in it. I worked with some nice people and had some good laughs, but it was going nowhere for me. I could see my future mapped out in terms of nine-to-five whatever, clocking on and clocking off. It was a regular job. As soon as I discovered a love for acting – I did it as a non-professional. I joined youth clubs, youth groups, we did musicals and plays, and I thought, “This is what I want to do.” I just loved it.

AX: As part of the appeal of being an actor for you is the unpredictability of what you’ll be doing next, do you think that’s part of the general appeal of DOCTOR WHO, and for you personally – that the Doctor never knows what’s coming next?

BRADLEY: Yes, I think so. Yes. Because he’s constantly surprised in often very perilous situations, and you know that it’s not that he knows he’ll always survive like Superman, because he’s the Doctor. You see him just as fearful as his companions, but he always finds a way to get it through.

AX: American audiences are becoming much more aware of your work lately. Does it feel like you’re getting more breakout roles, or is it just that the U.S. is seeing more of them?

BRADLEY: Well, it’s nice – I’ve been around a long time, doing all sorts of stuff, quite a lot of theatre early on, and I’ve always enjoyed it and I certainly have as much enthusiasm for it now as I had then. But it’s really nice – it’s only been in the last few years that I’ve started doing, I suppose, from HARRY POTTER onwards, and then you think, “Oh, well, that’s my blockbuster for life,” and then this happens, and then something like BROADCHURCH and GAME OF THRONES, and you think, “Wow, what a treat to be part of all these.”

AX: What attracted you to GAME OF THRONES in the beginning?

BRADLEY: A great story. You want to do a good job, you want to be in something like that, because it’s something that’s generating so much excitement that it’s good to be a part of it.

AX: Have they told you whether or not Walder Frey will be back?

BRADLEY: Not officially. I hope I’m going back to Belfast [where GAME is shot], because he’s in the books. You never know, but I’ll find out sooner or later, and I hope I do. I look forward to it.

AX: It seems like they’ll need him back at some point to keep that storyline going …

BRADLEY: Well, there’s hardly anybody left now. I’ve got rid of them, so … [laughs].

AX: Had you read the GAME OF THRONES books, or when you got to that part in the script, did you go, “Whah!”?

BRADLEY: Well, I’ve never read the books – I haven’t had the time, because particularly in the last year or two, I’ve had loads of scripts to read and learn, and it takes me a long time to read a big chunky book like that, so I just wait until I get the scripts. But when I saw the scene, I thought, “Ooh, this is going to ruffle a few feathers.” Much more than I imagined, to be honest, the reaction to it.

AX: How was filming the Red Wedding sequence?

BRADLEY: Oh, it was great. On the day, on the welcoming scene, that long speech he had, where he’s a consummate performer, he welcomes them into the lion’s den and smiles, talks of a good night and it seems like all is forgiven and forgotten. But of course, he’s just relishing the moment of when he lets his dogs loose with their crossbows on the whole lot of them. The actual Red Wedding scene, with the slaughter and everything, took a whole week, because there were so many set-ups and so much prosthetic work to be done, with slit throats and arrows. And also, I don’t know if anyone noticed, but up in the gallery, the musicians, before they got their crossbows out, there was one guy who’d come all the way over from England at his own expense to be in it. He didn’t want to play a big part, he just wanted to be in it. He is the drummer with Coldplay. They were preparing for a big tour to I think New Zealand; he asked permission from [Chris] Martin and the band to come over because he was just crazy about GAME OF THRONES and wanted to be in it. So the director set him up in the musicians’ gallery and gave him a drum and gave him a brief close-up with the beard and the drum. So we were all thrilled. He just wanted to be in it. They gave him a non-speaking role.

AX: Which project do people tend to recognize you for most?

BRADLEY: Well, for years, it was always HARRY POTTER, but I’ve just noticed in the last few weeks with GAME OF THRONES – I never realized it had such a big audience.

AX: Have you had any interesting encounters with fans?

BRADLEY: I met a lady at Comic-Con who was dressed up as William Hartnell as the Doctor. She had the white wig on and the suit and she was actually walking around like this and she was in the crowd and I spotted her and I said, “Come here, let’s have a photo together.” So we had a picture together and compared our cloaks and scarves and everything.

BRADLEY: I can’t remember what I expected it to be like, because I never expected it, you know? But I have to say, I’m just enjoying it, because I’m nowhere near the level where people just can’t go anywhere, have no private life. I wouldn’t like to be in a situation where I had to keep myself behind a high wall and just go out in disguise or get into a darkened car every time I go out like some people, so the level I’m at, it’s something where I can just enjoy it. Because I enjoy meeting people.

AX: Is there something else you’d like to say that hasn’t been asked this morning?

BRADLEY: I honestly can’t think of anything.

AX: How many swag bags have you gotten since you’ve come to California?

AX: You’ve got to do better than that.

BRADLEY: That was in San Diego [at Comic-Con]. This is L.A. So we shall see, the Doctor says [laughs].

Related: Exclusive interview with David Bradley in AN ADVENTURE IN SPACE AND TIME – PART 2