The actress talks working on the FX half-hour comedy 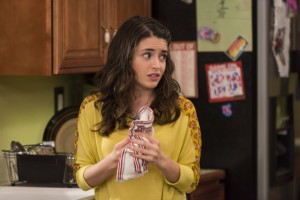 On FX’s half-hour comedy ANGER MANAGEMENT, with new episodes currently airing Thursdays at 9 and 9:30 PM, Charlie Sheen plays anger management psychotherapist Charlie Goodson, who has some issues of his own. He is also the father of teenaged daughter Sam, played by Daniela Bobadilla.

Bobadilla, who previously played the pregnant girlfriend of the Jason Isaacs’ character’s son on AWAKE, is a few years older than Sam in real life. Talking over the din at a party thrown by Fox and FX at the Television Critics Association press tour, the Mexico-born actress sounds like she’s enjoying the unusually fast pace of making ANGER MANAGEMENT. Unlike most series, which shoot one season at a time of twenty-two episodes, then takes three months off and resumes if renewed, FX picked up ANGER MANAGEMENT for one hundred half-hour episodes after a successful ten-episode first season. Although the episodes will be spread over five seasons, they are all being shot consecutively, with approximately two produced per week.

ASSIGNMENT X: How is it doing all of these episodes in a row? Your production must be at the speed of light.

DANIELA BOBADILLA: Oh, it’s even faster than that. It’s ridiculous. Literally, it’s like comedic boot camp. It is so much fun, but it really is so fast. We’ve been cross-boarding – we been doing [scenes from] two episodes in one day and it gets crazy. I mean, Charlie’s the only one who can really handle it. The rest of us are like little puppies, like, “Yeah, we can do it, we’re good!”

AX: How does working at this speed compare to a more normally-paced show?

BOBADILLA: It’s so different. I mean, I literally went from NBC’s AWAKE, a drama that we shoot in eight to nine days, so it was a very different pace. You literally just did one to two scenes a day. This is so different. I mean, the acting for me – on the other one, it was more natural, you can kind of take your time to really get into it. On this one, you have to be natural, because you’re literally doing it on the wing, too. I think it works for both genres, though.

AX: Do you have any memorization techniques about how to memorize that many scenes that quickly?

BOBADILLA: Definitely. I learned it from AWAKE, actually, because they were longer scenes. On this one, we have shorter scenes, but a lot more lines, so I actually write out my lines. I don’t know why, but just by doing the movement [of writing] with my hand, I literally feel it. 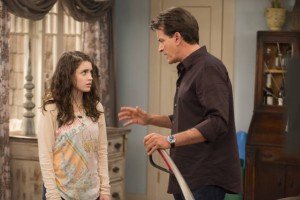 AX: Your character is fifteen going on sixteen – how old are you in real life?

AX: So you’re old enough to not need a teacher on the set.

BOBADILLA: Yes, exactly. Which I think is the point of casting older.

AX: How is it revisiting being fifteen?

BOBADILLA: It is so much fun. I had a very interesting childhood. I was involved in theatre, so I was already kind out of the normal school activities and everything, but I definitely saw [other children] and I watched them, kind of like a TV show, I watched my other classmates. So to be able to actually live it now, it is so much fun. And it’s fun to go back to something you actually know. I’m sure it will be way harder to play somebody older. It’s fun – it’s fun to make fun of it and be like, “Oh, my God! I hate my parents!”

BOBADILLA: No. I’ve been a fan of Charlie and Martin for a really long time, my family especially, so I never had it in my mind that he would come on the show, and all of a sudden, halfway through filming the first ten episodes, they announced it. And I couldn’t even talk – I was just like, “No way.” Let alone being on the same show as Charlie, and now Martin? It was so epic, to kind of be adopted into the Sheen family. Let’s just say my [real] parents were ecstatic.

BOBADILLA: Oh, yeah. They definitely were. My grandpa, when we lived in Mexico, he was a big WEST WING fan.

AX: Are you allowed to contribute any suggestions for your character?

BOBADILLA: Not too much. Our writers are so fantastic that [it seems unnecessary]. Even Charlie doesn’t try – we don’t really improv that much. It’s just that the writers have an ear – what you hear is what they wrote.

AX: What would you most like people to know about ANGER MANAGEMENT?

BOBADILLA: It only gets crazier. If you thought you already saw the unexpected, let’s just say that to have Martin Sheen as a regular adds a whole different layer.

AX: Because you’re doing a hundred episodes in a row, that’s going to be like doing five seasons’ worth of a show in about a year and then being free to do other jobs …

BOBADILLA: It’s ridiculous. Everyone says, “Oh, but you’re not going to be able to work [on anything else] for a whole year.” I’m like, “Yeah, but it’s going to air for the next five years, while I’m already on something else, so it’s the best thing ever.” My parents couldn’t believe it. They were like, “You’ve got stability as an actress? What kind of person are you?” [laughs] So it’s definitely a blessing.