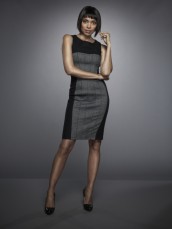 The actress talks her long run on the series, plus her SERENITY role 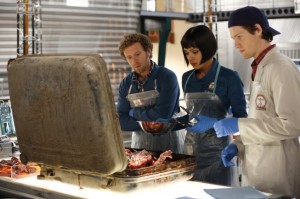 BONES, the Fox hit that’s having its eighth season finale tonight, Monday at 8 PM, has been picked up for Season 9. Heroine Temperance “Bones” Brennan, played by Emily Deschanel, is arguably the bossiest person at the Jeffersonian lab, where she is the forensic anthropologist. However, the person officially in charge of the lab is forensic pathologist Dr. Camille Saroyan, played by Tamara Taylor.

Camhas had an interesting tenure on the show. When she arrived at the beginning of Season 2, it was discovered that she had a romantic past with David Boreanaz’s character FBI agent Seeley Booth, which rekindled into a brief fling. These days, of course, Booth is with Brennan, and Camhas embarked on a relationship with lab intern Arastoo Viziri, played by Pej Vahdat. Meanwhile,Camhas adopted Michelle (Tiffany Hines), the daughter of another, now-deceased former boyfriend.

Taylor, originally from Toronto, Canada, has a solid past in films and television, including recurring roles on PARTY OF FIVE, LOST and NCIS, series regular gigs on CITY OF ANGELS, HIDDEN HILLS and SEX, LOVE AND SECRETS and feature gigs in SERENITY, DIARY OF A MAD BLACK WOMAN, 3 LBS. and SHUFFLE. However, with seven seasons and counting on BONES,Cam is by far her longest-running character.

At a party thrown by Fox for the Television Critics Association, Taylor talks about her tenure on BONES.

ASSIGNMENT X: When you started on BONES in Season 2, did you think it was going to turn into this long-term gig?

TAMARA TAYLOR: No clue. I had no clue. A gal can dream, but honestly, I think they had brought me on for six episodes. “Possibly more if it worked,” is what they said. 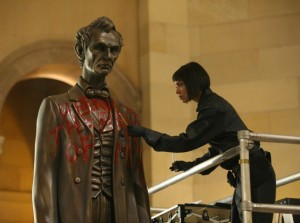 AX: Congratulations on being picked up for Season 9.

TAYLOR: You know what? I think we were all gung-ho. At this point, when you’re this far along in a show’s run, it’s just like, “Bring it on. Another season, why not? We’re here, we love each other, we know how to do this.” So it’s totally fun.

AX: At this point, does this job feel like something other than doing a regular acting gig? I imagine you’ve now played Cam as long as you’ve done anything, if not longer.

TAYLOR: Anything. Yeah, longer than I’ve ever played anyone. And oddly, it’s gone so fast. It’s actually gone really fast and it hasn’t gotten stale and boring, and I think it’s probably due to the writers and the fact that they keep us on our toes.

AX: There had been a different lab boss in Season 1. When you came onto the show, did the producers say why they were changing up the head of the lab?

TAYLOR: They didn’t tell me. I just know that they really, really liked the actor, Jonathan Adams, but that they wanted to add a little romantic tension between David and Emily’s characters. So [Camille was brought in as Booth’s ex, who he has a fling with in Season 2]. And it’s odd, because that didn’t last very long. That was the way to fly me in, and then it was nice that they sort of left that alone and moved on.

AX: Did you do any research into any aspect of the role?

TAYLOR: You know what? I have never played a coroner before, and certainly not a forensic coroner, but we have a beautiful woman named Donna Cline who’s our technical advisor, and she took me under her wing and said if there are any questions, or whatever you need to know, I’m your gal. And so I just picked her brain all the time, and did my own research online. But I didn’t go down to the city morgue – I didn’t do any of that. I actually decided that in order to not be completely freaked out by what it is I was doing, I might not want to have a point of reference with a real corpse. I know it sounds silly, but …

AX: Have you ever been grossed out by the props?

TAYLOR: Oh, yeah. Everyone’s got their thing. Emily doesn’t like porous things – porous bones freak her out. So oddly enough, you can throw as much blood and guts at her as possible; she’ll root around in maggots and rats, but does not like porous bones. Me, I think slicing a brain was one of the most intense things I’ve ever had to do.

AX: What do they give you when you have to do that? Does the prop department make a prop brain?

TAYLOR: I think they made one. They kind of floated the idea that [the brain] might be real [animal] and we all decided that wasn’t a good idea.

AX: So at least it doesn’t smell like something dead.

TAYLOR: Exactly. It all smells like plastic. You’re very much handling props.

AX: During the course of the series, Cam has become the adoptive mother of an initially teenaged, now college student daughter.

AX: Did you do any research into adoptive parenting?

TAYLOR: No, I just had to imagine. And the nice thing is, she’s not my biological kid, so I can just sort of beCam, being awkward, and not knowing what the hell to do. That was nice that it actually required no research, just working with the other actress.

AX: How is it playing opposite somebody that much younger?

TAYLOR: It’s fun. And she’s really good. So I think we’ve had really good fun with our scenes.

AX: Did you know in advance that Cam was going to get a love interest this year?

AX: How did you feel about the scenes where he was reading poetry to you in Persian?

TAYLOR: It’s interesting, because I have really, really close family friends that are Syrian, so they got a good kick out of the fact that he was reading me poetry in Farsi. I think it’s a beautiful language. And I love [the poet] Rumi – who doesn’t?

AX: This is at least Cam’s third love interest on the show …

TAYLOR: She gets around.

AX: So how would you rate them?

TAYLOR: [laughs] I think that Pej, or Arastoo – aside from Booth, he’s probably the most serious one. They seem to be taking him a little more seriously, but we’ll see what develops. I’ve been angling for a love interest for awhile, and a love interest that we can see more, and the producers brought up the most practical point, which is it’s difficult to do anything outside of the lab. If you notice, most of the activity that the squinterns get is in the lab, so if you have a love interest, if we bring him into the lab, we’ll see him more. So it was good thinking. Are you digging Pej? I think he was a great choice.

AX: What’s your take on Cam’s progression as a person over the seasons?

TAYLOR: I’ve been digging it. When Cam came on, she was very clearly the boss and establishing herself as the boss. And the nice thing is, as the years have rolled on, she’s allowed herself to loosen up, work with the group, as opposed to wagging her finger at the group, and now there’s a vulnerability and a humor that wasn’t initially there that I’m liking.

AX: How is it when David Boreanaz directs an episode?

TAYLOR: I was telling somebody outside that we want to poke fun at him, because he’s such a practical joker, but he’s great – he’s humble, modest and really good at it. So there’s nothing but love.

AX: Do you get any kind of mental whiplash from him going behind the camera to jumping in front of it?

TAYLOR: No. I’ve always wondered how other actors did it and what he’ll do when he’s in a scene is, he’ll act and then there’s an executive producer [Ian Toynton] who also directs, so he has to be [Boreanaz’s] eyes and ears at video village, so that [as an actor, Boreanaz] can stay with us.

AX: You’ve said you really liked doing the 9/11 episode, “The Patriot in Purgatory,” when all of the current male interns were working in the lab.

TAYLOR: Yeah. I love that episode. That really turned out nicely. I was really surprised, because we had done it so long ago, you sort of forget how many storylines are going on and how nuanced it was. I think it was a really powerful episode.

AX: Do you have a favorite episode of, say, the last two seasons?

TAYLOR: Oh, my goodness. I’d have to say the 9/11 episode actually got me. That was one of my favorites. And it’s tough. I had fun doing “The Invasion of the Mothersuckers” [in which there is footage of a young pre-doctorate Cam acting in a cheap vampire movie].

AX: You were also in the film SERENITY …

TAYLOR: Oh, that movie is one of my favorites ever and even if I wasn’t in it, it would have been one of my favorites, so any time [the film’s maker] Joss [Whedon] wants to bring it on, I’m there. On the record, I wish FIREFLY [the TV series on which SERENITY was based] had never been canceled. It was one of the best shows on TV. Loved it.

TAYLOR: No. Actually, this has kept me pretty busy. There are a couple of things that I wish that I could speak about – they’re not alive enough to be in existence yet, but when they are, I’ll let you know.

TAYLOR: That I love it and I have a great time. That we’re so excited to be doing a Season 9 and it’s just going to keep on getting better.

Related:TV Review: BONES – Season 8 – “The Maiden in the Mushrooms”

Related:TV Review: BONES – Season 8 – “The Blood From the Stones”

Related:TV Review: BONES – Season 8 – “The Doom in the Gloom”

Related:TV Review: BONES – Season 8 – “The Survivor in the Soap”