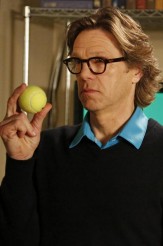 Exclusive Interview: Being one of THE NEIGHBORS is alien to Simon Templeman 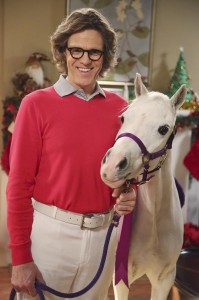 THE NEIGHBORS, now in its second season on ABC, Fridays at 8:30 PM, is half-hour comedy about human/extraterrestrial culture clash. The Weavers, a nice middle-class family consisting of dad Marty (Lenny Venito), mom Debbie (Jami Gertz) and three kids, move to a quiet gated community, where everyone else turns out to be from the planet Zabvron.

Chief among the Zabvronians is the family next door to the Weavers. Simon Templeman plays the alien patriarch Larry Bird, who can be doleful, fretful, ambitious and wildly optimistic all at the same time. Larry is married to Jackie Joyner-Kersee (Toks Olegundoye) an they are parents to Reggie Jackson (Tim Jo) and Dick Butkus (Ian Patrick), as the aliens have a tendency to name themselves after famous sports figures.

THE NEIGHBORS is actually quite funny and Templeman, who uses his real British accent to play Larry, is happy that viewers are getting the joke. At a party thrown by ABC for the Television Critics Association, the actor talks about his idiosyncratic character.

ASSIGNMENT X: Were you surprised or just pleased that THE NEIGHBORS was renewed for a second season?

SIMON TEMPLEMAN: I was really thrilled that we were back. I know we were all really proud of the show, and we really enjoyed making the first season, so coming back was the cherry on the cake. It was great.

AX: How did you see Larry as a character at the outset?

TEMPLEMAN: I think he’s struggling to keep up. I think [the situation] is moving much faster than he’s able to cope with. I think he’s thinking on his feet, so he’s having to adjust a lot, and that’s hard for him. He’s a little set in his ways, and I can relate to that.

AX: In Season 1, THE NEIGHBORS did a musical episode, “Sing Like a Larry Bird.” Was that the most complicated episode to make so far?

TEMPLEMAN: Yeah, it was. It was great. It gave me a lot of respect for shows like NASHVILLE and SMASH and GLEE, those guys who have to crank that out week by week. It’s a lot of work and, I mean, NASHVILLE people don’t dance and we danced, too. But it was great fun.

AX: Was there a certain level of gracefulness that they wanted out of all of you when you were dancing, or were you encouraged to just get in the right spirit, since the characters aren’t really supposed to be able to dance?

TEMPLEMAN: It’s the Carol Channing maxim, isn’t it? You can be rubbish standing in the middle if you’ve got fifty fabulous dancers around you. You can fake it. And that’s certainly what I did. I mean, Toks [Olegundoye, who plays Larry Bird’s wife Jackie Joyner-Kersee] can bust a move, and a lot of our aliens who are week to week as our aliens – a lot of them come from musical theatre backgrounds. So for them, it was a piece of cake. For somebody like myself, it was a little more of an uphill battle, but it was a good time. And working with people like Alan Menken [who wrote the music for the episode’s songs] and these people are so good at what they do, it’s a real privilege and a pleasure.

AX: Were you familiar with Alan Menken’s music before that?

TEMPLEMAN: Yes, of course. He’s one of the great American composers. I mean, when we were recording the orchestra, you realize these guys are rock stars. We were all just so happy to be there, and all a little giddy. And the musicians and the singers that were hired – you realize these people are just so good at what they do.

AX: And do you have a favorite episode or a favorite scene from first season?

TEMPLEMAN: Well, I have to say the musical is close to my heart, because it was so crazy and insane. I thought what we managed to do in a week was amazing. So that would be it.

AX: How are things progressing in Season 2?

TEMPLEMAN: I think our [the aliens and the humans’] lives are becoming more and more enmeshed, which is fun. I think the longer we let the aliens loose on Earth, the more fun there is to be had, not less, because every time you have to refer back to Zabvron, it’s like, “Well, we’ve done that, we can move on now.” So it feels good. Now they can’t go back, because when George Takei, [who played] our Supreme Commander, came and Larry said, “No, we’re staying, I like it here,” there’s no going back, so it will be a new chapter for the aliens, I would think.

AX: Did you do anything during the hiatus?

TEMPLEMAN: I did. I did a couple of videogame things, but I had a week in Hawaii and I spent Fiesta in Santa Barbara, which was a blast. I actually enjoyed time with my family, which was really nice, going back to being a dad again.

TEMPLEMAN: My kids really like it. My kids – one is twenty-one, and my daughter’s thirteen, and they both respond to the show. I used to give them the scripts to read, and I’d hear them both chuckling, so I thought, “Well, this is good, I’m not crazy.” Because I read the scripts and I think, “These are really fun.” I think they’re deceptively smart and funny, and the fact that my kids liked them was a really good sign, I thought, because I think we are a family show. I say that loudly and proudly. I think there’s room for it. Especially on a Friday night.