It's a close call for the top soundtracks, with equally cool Composers to Watch

Though it’s far more of an interactive movie than it is a video game, the negligible level of first-person shooter ability here doesn’t prevent BEYOND TWO SOULS from being a complete immersive experience, especially with the eerie, and rapturous quality of Lorne Balfe’s score, leveled up with the ace technical and musical production oversight of Hans Zimmer. For a heroine seemingly cursed by her lifelong bond to an invisible entity, Balfe conjures a truly beautiful theme, topped with a female voice that resonates with a wounded emotion that binds this powerfully symphonic score with a deep emotional resonance while also neatly delivering the percussive action that the videogame genre can’t live without, with the big bonus points of rock-driven guitar and string suspense that makes “Souls” a worthy successor to Zimmer’s INCEPTION. That BEYOND‘s score ends up in a truly spiritual place says much about how well the “game’s” ambitions succeed at outweighing its button-pushing expectations. Hopefully Sony will see their own light and make Balfe’s score available for download beyond its present PS3 platform.

Bucolic echoes of his countryman Georges Delerue inflect French composer Laurent Eyquem’s look at the emotional battle for a small town’s hearts and minds during America’s Civil War. Eyquem gives this rural village a lushly effective orchestra for the countless lives being lost beyond its borders, as aching fiddles, poignant pianos and heartfelt strings create an uncommon intimacy that ties its pro and anti-fight characters together in a common sense of tragedy, while reflecting their need to truly bond together for an intimately powerful score about any era’s war at home.

CURSE OF CHUCKY
(Joseph Lo Duca / Back Lot Music)
Joseph LoDuca has doubtlessly picked up no small amount of ghoulishly frightening humor from his early EVIL DEAD stints with Sam Raimi, a delightfully twisted sensibility that now powers up everyone’s favorite killer doll for a full-on assault of childhood music that maliciously plays over this unexpectedly terrific VOD sequel – one that’s more than good enough to play on the big screen. With SUSPIRIA-like bell percussion conjuring every happy toy that might be in a kid’s treasure chest, LoDuca builds suspense with an ominous, old school horror score that rings through CURSE‘s old dark house setting with voices, organ and creeping pianos, dementedly waiting for the moment that Chucky’s no-batteries surprise springs forth with a ripping rock guitar that jams with the old school creepy stuff. Rarely has such musical life been pumped into a killer icon for comedic horror scoring at its best.

Steve Jablonsky’s rhythmically energized scores have helped no small amount of flag-waving, anti-alien movies blow the godless insectoid scum to smithereens without a second thought – all of which makes the utter, musical subversion of ENDER’S GAME all the more powerful. While Jablonsky’s heroically patriotic percussion is a major player in ENDER‘s action, it’s joined by eerie, otherworldly atmospheres and a church-like choir for a trippy approach that provides true, and surprisingly moving musical food for thought to the kind of effects blockbuster music that’s always blown up bug-eyed monsters real good.

Always an unabashed melodist with his orchestrally sumptuous scores to A SINGLE MAN and ROMEO AND JULIET, Polish composer Abel Korzeniowski applies all of his rapturous power to The Magic Kingdom to brilliantly seditious effect for this stolen footage revelation of Disneyland as the most nightmarishly surreal land this side of BRAZIL. Yet it’s the wide-eyed wonder that this gorgeous score is all about, until the B-movie chills of mad scientists, retro jazz of sexually wanton tourists and the dissonance of demon-eyed small world dolls poke in to his ersatz Max Steiner / Alfred Newman sound that could easily serve as the soundtrack for a soaring Disney ride, whose ultimate destination is symphonic B-movie madness.

Chris Beck has shown his affinity for snowy enchantment in scores like FRED CLAUS and ICE PRINCESS, with Disney magic in particular for their Oscar winning short PAPERMAN. It’s a talent for bright musical wonderment that covers the landscape of “Frozen” with affection and derring-do adventure. The sparkling Menken / Ashman scoring spirit of such past Mouse House girl power fairy tales as THE LITTLE MERMAID and BEAUTY AND THE BEAST is on glistening display in Beck’s sweetly sublime work that’s all about casting a spell of melodic wonder and excitement, with the added touch of Nordic instruments and voices that pay tribute to the movie’s roots in Hans Christian Anderson’s “The Snow Queen.”

It’s one thing to replicate the Euro-Giallo-Psychedelic horror groove like BERBERIAN SOUND STUDIO and AMER, but it’s a whole deal to put actual blood and soul into a spot-on replication. Leave it to REPO MAN‘s Steve Hufsteter to create another cult-worthy score as he conjures the retro progressive rock, creepy organs, rushing winds, moaning female voices and cool jazz that make for Xan Cassavettes’ brilliant tribute to Jean Rollin’s French lesbo-vampire films, as transposed to erotic hipster New York City and its wooded, body-dumping environs. But for Hufsteter, it all plays like a lyrically groovy twilight zone that’s both frightening and hypnotic, conjuring the rush of the eternal dark and why being undead is the best ticket to hearing the Velvet Underground children of the night.

It’s no easy task to score music for one of the most towering figures of this century’s fight for equality, especially when a movie doesn’t try to paint him as a saint. But Alex Heffes rises to the occasion with a fist-holding theme that’s the sound of nobility under Apartheid fire itself, a bold motif that holds fast as it’s put to a decades-long test of imprisonment by the Afrikaaner regime, which is embodied by dark samples. But by the end of MANDELA, those rock-like rhythms are now inclusive with the impassioned, orchestral sound and determined, tribally-influenced percussion that holds Mandela and his believers together for their ultimate triumph of uniting all of South Africa in hopeful democracy, all forging an emotionally epic, righteously swelling score that makes Mandela’s fight as vibrant, and affecting as if it took place yesterday. 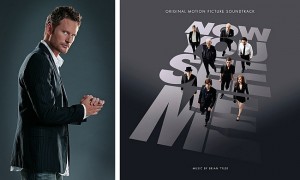 Few composers have their pulse on the popcorn multiplex sound like Brian Tyler, who’s able to butter up its rock-rhythmic musical recipe with genuinely memorable themes and melody that’s far from fluff, especially effectively this year with the Marvel superhero antics of IRON MAN 3 and THOR: THE DARK WORLD. But when it comes a score that just damn fun, then it’s NOW YOU SEE ME that takes the cake. Sure the funk-Schifrin-thief groove has been musically ripping off The Man for a while, but the next-gen composer homage has rarely been done with so much groovy swagger as Tyler’s riffs that have the orchestra rock Bond-worthy spy fun down in rejuvenated spades, conveying not only the super confidence of its super illusionist thieves, but the actual symphonic feeling of the joy of magic itself – creating a con that’s the real musical deal. 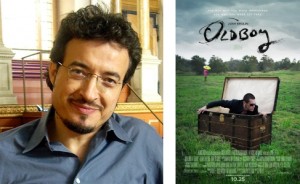 Though he literally blasted horror audiences out of their seats with an alarm siren of a score for the hugely successful redo of EVIL DEAD this year, Roque Banos has long been equally adept at resurrecting the slightly more subtly dark spirit of Bernard Herrmann, whose presence is very much felt for this underappreciated redo of OLDBOY. Laying the motivic bait for its antihero with the gracefully twisted effectiveness of the film’s vengeful villain, Banos’ memorable hotel room of thematic mirrors builds with rock and roll intensity, the bells of childhood lost, hammer-bashing Asian percussion and cunningly elitist orchestra. It’s a combination of in-your-face intensity and the musical embodiment of Hitchcockian suspense that build to reveal the why’s and wherefores’ of unimaginable imprisonment and revenge, laying in the mental pain with truly twisted melodic grace for one doozy of a musical revelation. You can hear the resoundingly full orchestra gasping at the twisted brilliance as the thematic dominos falling into a place of awe-inspiring, and awful musical revelation. 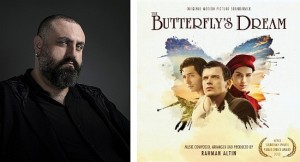 Two poetic Turks during the 1940s won’t let TB stop their words, or spirits from soaring, especially when accompanied by the lush beauty of old school romantic scoring that Rahman Altin lets soar for all of its string and piano worth in THE BUTTERFLY’S DREAM (DMC)

As a weathered sailor painstakingly tries to stay alive with only a few choice words for his situation,Alexander (aka Alexander Ebert of the Magnetic Zeroes) provides the existential, musical element of a memorably original score that courses from folk lyricism to eerie metallic effects and a subtle, striking theme that dawns with the seeming realization that ALL IS LOST (Community Music).

Ryan Amon’s exciting and emotionally memorable dystopian score contrasts the thronging, ethnic music and violently percussive sound of an overpopulated Earth below with the haunting, religious voice of the spaceship heaven above called ELYSIUM (Varese Sarabande).

Though dealing with an unjust killing that caused understandable outrage, Ludwig Goransson treats the events leading up to the fateful New Year Eve’s night at FRUITVALE STATION with an ambient, ethereal sound that powerfully contrasts with the soundtrack’s hardcore urban rap, showing a damaged man’s meditative and hopeful spirit that just can’t escape a brewing anger and hopelessness that will ultimately martyr him (Lakeshore)

Neither an outright country score or thoroughly brooding crime drama, Daniel Hart’s hauntingly ethereal score for AIN’T THEM BODIES SAINTS instead occupies the dream-like space in between the two musical styles, capturing the characters’ fateful longing in an unplugged way that beautifully befits the movie’s reprise of Terrence Malick “Badlands” imagery (Lakeshore)

One needs a powerhouse theme when it comes to an inspirational epic, and Rodrigo Leao has certainly has found a memorable melody to chart THE BUTLER’s” pilgrim’s progress in a score that also encapsulates decades of the black experience, all leading to a rousing, and emotionally earned musical walk through the pearly white gates of the President’s office (Verve International) 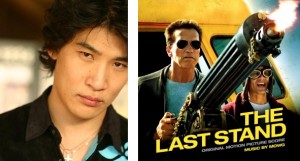 Korean composer Mowg Lee puts a headbanging spring into the step of the post-governator’s movie return with THE LAST STAND, a score that revels in Lee’s gleeful enervation of the Hollywood action sound that will likely bring him plenty of opportunities for more percussive shoot outs (Red River Entertainment) 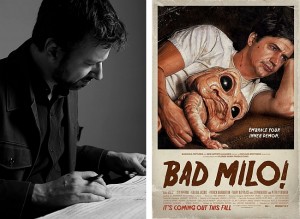 Ted Masur is delightfully up the butt of berserk, bizarro horror comedy scoring with the musical equivalent of an E.C. Comic, yet with a relatable humanity which shows that even BAD MILO‘s ass monster needs love too (Coming Soon).

Haim Mazar hears THE ICEMAN‘s deadly wages of sin with a muted, yet powerfully impactful score whose cold, pulsing rhythms, jazzy evocation of a life spent killing and waltz-like sense of sorrowful inevitability recalls the great crime scores of past while being very much its own hitman (Relativity Music 2)

Brian Ralston and the rapturous performance of The Hollywood Studio Symphony Orchestra resurrect the vivaciously tragic spirit of screen siren Rita Hayworth for the movie within-a-play to NEGOTIATING IDENTITIES and the on-stage events of PRIVATE DANCER, not only paying tribute to the composers like Hugo Friedhofer and Heinz Roemheld who helped make her a Hollywood goddess in “Gilda and “The Lady From Shanghai,” but also to such luminaries as Ralston’s teacher David Raksin (“Laura”), with an homage to Bernard Herrmann’s “Vertigo” and the Latin rhythms of the actress’ Spanish heritage for a soundtrack that powerfully blends the music of stage, screen and real life (Perseverance).

Article Source: Assignment X
Article: The Best Scores of 2013 – The Runners Up