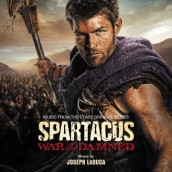 After scoring Starz’s SPARTACUS series and its spin-offs, Joseph LoDuca reaches the saga’s climax with a masterful, musical blow for freedom that does the saga, and the spirit of its late star Andy Whitfield worthy with WAR OF THE DAMNED. While the composer’s had plenty of experience in the sword-and-sandle arena from his days spent with Hercules and Xena (not to mention a Dark Ages Ash), the amped up violence and sex of this Starz spin has required even more musical muscle, and daring from the composer. Lo Duca’s final battle is impressively epic, pouring on gigantic orchestral themes that befit the stuff of historical legend, yet making the rebel relatably modern with a rock and roll edge, electric guitars and twisted samples seamlessly part of more gallant strings and brass. Period spectacle is provided with the rhythm of Roman instruments, along with heavenly and more gutteral voices.

You couldn’t get more different, or angrily raw from the approach that Alex North took for SPARTACUS back in 1960. Yet in his striking mix of old gladitorial school heroism and up-to-the minute metal thrash, Lo Duca’s scoring is very much about the same spirit, one that ultimately transcends from Roman-killing anger to a stirring, symphonic ode for soaring chorus and military percussion. With this immersive, unexpectedly emotional 70-plus minute CD, WAR OF THE DAMNED stand as the best work yet for a composer whose spent years immersed in the blood and sand of Starz’s killing pit, a stirring payoff that gets a big thumbs up.

Clink on the link to Purchase the Spartacus: War of the Damned soundtrack