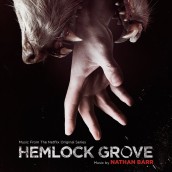 While he’s more than shown his blunt orchestral adeptness with the shrieking torture-horror scores for his two unsettling stays in the European HOSTEL,Nathan Barr is a composer who’s most unsettling creative talents lie at home in rustic America. The vampire bayou of TRUE BLOOD has made him the horror-scoring equivalent of Flannery O’Connor, creating music whose dulcimers and stings enticingly reek of Southern gothic black magic. Even when Barr packs up and travels to the imaginary Pennsylvania town of HEMLOCK GROVE, it’s still hard to take the country-sounding horror out of the boy.HOSTEL creator Eli Roth has given this Netflix series more of a twisted atmosphere than explicit gore (though there’s certainly plenty of that to go around), making HEMLOCK GROVE often come across like a very hip steeltown take on DARK SHADOWS.

Mansions, witchery and werewolves abound, familiar TV horror soap tropes that are met by Barr with piano, ukulele, voice and the composer’s beloved cello. It’s a romantic approach at once gothically earnest, but with a big wink in its deformed eye. Lurking percussion and eerily high string effects abound. Olde Europe chamber music creeps through the fog in a way you’d expect it to waft over a candelabra before panning to the crypt from which a late night chiller theater host will emerge. But Barr’s knowing smile is just as quick to rip one’s throat out with rampaging piano hits or evil electric guitar rhythms. With HEMLOCK GROVE, Nathan Barr declares himself as one of adult TV’s most sinister pranksters, giving pulpy material a memorably hip bite

Clink on the link to Purchase the HEMLOCK GROVE soundtrack