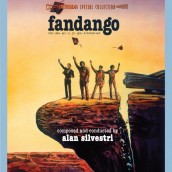 Though it barely got a release, 1985s 1971 road trip movie would go down as one of the latter decade’s most-loved cult movies, inspiring the admiration of “groovers” the world over. And while much of Alan Silvestri’s exceptional score would get left on the way to Mexico in favor of exceptionally used Pat Metheny tunes, FANDANGO stands as a landmark in the composer’s career as his first major venture into orchestral scoring. Thankfully Intrada knows where Silvesti’s symphonic champagne bottle is buried with this effervescent release. Joining Kevin Costner’s draft-dodging road trip after the electronic percussion heavy scores of CHiPS and ROMANCING THE STONE, Silvestri hits the road running as he captures sense of romantic, manly adventure for a group of college friends’ last fling before real, Vietnam-era adulthood.

Emotion is amplified into soaringly rugged strides and lofty emotion, a bold mixture of fun, sadness and Americana grandeur that resonates as one of Silvestri’s most poetically nostalgic works. Now-period electronics still remain a big part of FANDANGO capturing both the rhythm of a car speeding down back country gravel, as well as a twinkling, dream like vision of desert magic. FANDANGO‘s executive producer Steven Spielberg was obviously impressed enough to kick Silvestri’s career into high gear with “Back to the Future,” whose thrillingly youthful spirit is also very much apparent here, with all. FANDANGO showed the way that Silvestri would take from the melancholy simplicity of CASTAWAY to the pokey comedy of MOUSE HUNT and the full throttle action of THE MUMMY RETURNS. This is the beautiful soundtrack where it all truly started, its rock-pop western wedding dance and noble brass saluting the male bonding of a movie whose popularity, and musical resonance has never hit the brake, let alone failed to open a parachute.

Clink on the link to Purchase the FANDANGO soundtrack