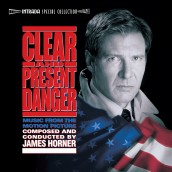 Horner fans will have a field day with this complete presentation for the composer’s second stab at Jack Ryan, Intrada’s two-CD set offering a virtual checklist of everything that’s great about the composer’s unabashed symphonic sensibilities. CLEAR AND PRESENT DANGER offers the heroic outrage in full swing, from a valorous main theme to another mournful take on a classical piece (here reprising Aram Khachaturian’s “Gayane Ballet Suite” after ALIENS) and a organic-electronic mastery of world music – here tuned to the South American drug war.

CLEAR AND PRESENT DANGER was a welcome change of pace after Horner accompanied America’s favorite CIA analyst on a dreary chase with the IRA in PATRIOT GAMES. Given a plot based on still-current events, this franchise highpoint allowed for far more exciting opportunities for Horner to run with. This ersatz “greatest hits” compilation is the composer at the top of his suspense game with a thrillingly familiar arsenal that’s both blazingly patriotic and brimming with the darkness of national intelligence gone wrong. DANGER offers three of Horner’s most dazzling set pieces, the exhilarating best being a near ten-minute “Ambush” which builds throttling, growling brass tension for a motorcade attack, the South American flute-percussion and orchestra finally exploding in a breathless run of van brake-punching for what stands as one of the most dynamic action sequences committed to film.

“Greer’s Funeral / Betrayal,” uses outraged patriotism as a funeral is cross-cut with the politically expedient sacrifice of a military incursion force as Horner turns his score’s thundering national pride against itself. But when it comes to scoring two people typing on a computer, “Deleting the Evidence’s” swings between rhythmic pianos, percussive hits and explosive orchestral builds is a lesson in how to make a scene of two intelligence dweebs playing dueling computers into the musical equivalent of an epic battlefield charge, with Horner showing just how well here he can wave the flag while warning us against its unbridled DANGER When it comes to unleashing the full power of his trademarked style, that’s a great thing indeed.