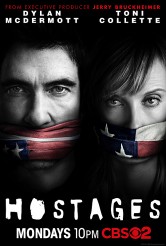 The series debuts on September 23 on CBS

“HOSTAGES, more than anything else, is a very different kind of show,” says Moonves of the series a surgeon (Toni Collette) whose family is taken hostage by a rogue FBI agent (Dylan McDermott). “We’ve generally avoided serialized shows in those shortened orders, although we watched with great interest at the success of, obviously, a 24. THE FOLLOWING did very well. So when the [Jerry] Bruckheimer people brought us that project, we were very excited. We realized we needed a new model to do it. And I’m sure HOSTAGES will appear, after the 15-episode run, very shortly on the Netflixes and Amazons, which enables people to catch up. It’s a new world. Look, every model that we’re doing is somewhat different than it was before. At the bottom of it all, it’s still quality television, but as you know, cable has had great success with serialized drama. And that’s been helped by the Netflixes of the world and binge viewing as well, and we think that can happen with HOSTAGES.”