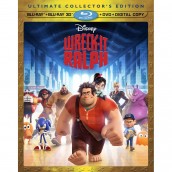 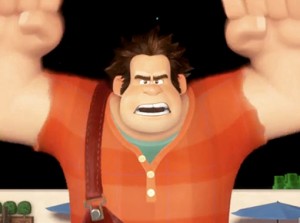 Hands down, WRECK-IT RALPH was one of the best animated films of the year. And this was a year that also had such exceptional entries as FRANKENWEENIE and PARANORMAN.

That said, I was a bit disappointed that the inferior BRAVE (good, not great) bested all of them for Best Animated Feature at the Oscars.

Thankfully, the Blu-ray/DVD combo release of WRECK-IT RALPH has arrived for home entertainment viewing and the movie is just as entertaining the second time around.

A loving ode to 8-Bit videogames of the 1980s, not to mention an ode to video gaming in general, WRECK-IT RALPH does for this world what TOY STORY did for toys.

The story follows our lead character Wreck-It Ralph (John C. Reilly) from a 1980s styled videogame called FIX-IT FELIX JR. Ralph hates being the bad guy and not getting any credit in the game and decides to leave his game and attempt to a hero elsewhere.

Escaping your game is dangerous though – if you die in another game, you die for good and with his absence for FIX-IT FELIX, JR., the game itself is threatened with getting its plug pulled.

Ralph first steps into a military game called HERO’S DUTY where he “wins” a gold metal, but upon escaping the bug-like planet, he ends up crash landing in a racing video game called SUGAR RUSH. There he meets Vanellope Von Schweetz (Sarah Silverman), a cute little outcast on her world. She’s a “glitch” and not allowed to leave the game. In order to get his gold medallion, he needs to help her out, and ultimately finds a friend and learns what being a hero really is.

Joining in the adventure is Fix-It Felix Jr. (Jack McBrayer) who tries to find Ralph as well, and save the day for the sake of his own game – and soon comes to understands Ralph’s inner struggle.

With tons of in-jokes for gamers, a beautifully realized video game world and tons of cheeky humor, WRECK-IT RALPH is a blast and perfectly directed by Rich Moore who has made a better Pixar film that Pixar did last year.

The ULTIMATE COLLECTOR’S EDITION features both a Blu-ray, DVD and Digital Copy – which continues to be a plus with these Disney releases and gives the kiddies (and adults) multiple platforms to enjoy the film on.

That said, Disney has also made Blu-ray its repository for all the special features that are associated with the disc. And the Blu-ray special features are plentiful and eye-opening especially in regards to the development process of the film.

The deleted scenes are not actual scenes cut from the film, but sequences and story ideas that were abandoned early on. In these scenes we find Ralph held in the brig on the HERO’S DUTY world where he finds out about a SIMS-like world where everything is wonderful and perfect. This throughline continues to be explored in the special features were we see Ralph entering that special happy world, where he realizes that’s not what he’s looking for either.

Director Moore has commentary throughout these scenes, explaining why the story points were abandoned. The SIMS world, awhile interesting, took you out of the more contained video game world of the film. In order for it to work, Ralph would have had to travel into the video game arcade owner’s personal computer or something like that, since SIMS-like games aren’t found at arcades.

There are also deleted scenes showcasing a WIZARD OF OZ-like adventure for Vanellope, Ralph and Fix-It Felix, Jr. who actually showed up earlier to help Ralph. King Candy wasn’t as overtly villainous as he is in the finished film as we discover in these deleted moments as well.

A solid making of WRECK-IT RALPH is also included called “Bit By Bit: Creating The Worlds Of WRECK-IT RALPH” and The Gamer’s Guide To WRECK-IT RALPH (hosted by Chris Hardwick) is part of a thing called Disney Intermission. These are fun little factoids about the film (including game cameo information) that you can click on throughout the process of watching the film. It’s a nice use of Blu-ray technology, and you can watch all these little micro-features during the film or all in one chunk.

Additionally, the Academy Award winning PAPERMAN short is also included on both the DVD and Blu-ray. Deserving of its Oscar, it’s a sweet little love story, shot in black and white and incorporating both traditional cel animation and computer trickery.

WRECK-IT RALPH proves that Disney can compete with its own in-house company Pixar in making animation gold again. Now I can’t wait for the sequel.