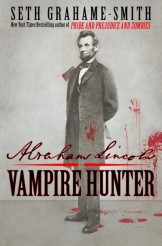 While speaking to the crowd at Wondercon 2012, ABRAHAM LINCOLN: VAMPIRE HUNTER screenwriter Seth Grahame-Smith fielded questions from the audience about the new film and was queried if he felt Barack Obama could be an action hero too

“I think Obama could pull it off, “ says Grahame-Smith. “He’s tall, he’s in shape and yeah, he’s got a little badass quality to him from time to time.”

And what would his weapon of choice be?

“Diplomacy,” adds Grahame-Smith with a laugh.