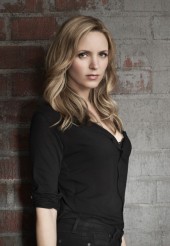 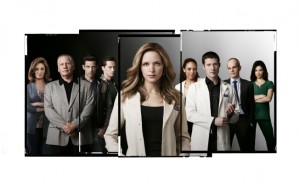 THE MOB DOCTOR is one of those TV shows that sounds like a bad SATURDAY NIGHT LIVE sketch – “she’s a doctor and she moonlights as a mob doctor.” Laughs ensue.

And, well, they do with this new Fox series, sort of. Any show that has a line like “cut her some slack, go have a taco,” it makes you question whether it secretly wants to be a comedy.

Sadly, that’s not the case. THE MOB DOCTOR is deadly serious, but the scenarios, the plotting and everything about it screams bad, bad, bad and unintentionally funny.

The dialogue is hokey, the situations completely clichéd and ridiculous and even the usually reliable Jordana Spiro as Grace Devlin (even her name is too on the nose) is reduced to a caricature of a doctor.

In the one-hour premiere, she saves a bad guy with a screwdriver in his head, a boy with a gunshot wound and diagnosis a girl who is pregnant even though she’s never had sex.

She also is told to kill a patient via a deal she made with the mob to save her brother from getting whacked.

And, to add insult to injury, her mom is a recovering cancer patient.

Can she have any more problems?

Toss in a bunch of highly “ethical” speeches by Devlin as she questions her own morals and ethics and the episode just rambles on and on with nothing substantial or meaty to hold on to.

How a series can sustain this premise for more than a couple of episodes is beyond me. Most of the characters are under-written and unlikable and poor Spiro tries hard to bring a solid foundation to the crap she’s wading in, but she is the best thing about this show.

Like cop shows, the hospital drama has to try harder to be original and different. We’ve seen it all. And in theory having a doctor moonlighting for the mob sounds intriguing, but the series tries way too hard to be weighty and self-important. At least have fun with the premise.

Aside from Spiro, the only redeeming moments in the pilot come from aging mobster Constantine Alexander (William Forsythe) who has a kinship with Devlin. I love the moments they share together and it is by the most promising aspect of an otherwise dreadful series.

Could it get better? Maybe, but the show commits a cardinal sin of stupidity at the end of the episode where SPOILER ALERT, Devlin’s debt to the mob is wiped clean, but she decides she wants to stay in town and have her debt assumed by a new mob boss. Ugh!

I guess there wouldn’t be a series without her working for the mob, but all credibility is thrown out the window with that one lame bit.