The show has been accused of being Looney Tunes before – this time it goes for it literally, but in a strangely subdued way 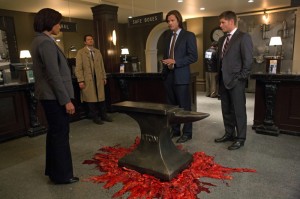 SUPERNATURAL has had its cartoonish moments before, but in “Hunteri Heroici,” it goes for the vibe deliberately and literally, with Acme anvils and Road Runner-style painted escape tunnels. This yields some worthy laughs, but not as many as we might expect. We also finally get an explanation for how it is that Sam (Jared Padalecki) is no longer with Amelia (Liane Balaban), yet still aching for the life he had with her.

Castiel (Misha Collins) doesn’t want to go back to Heaven. We know it’s because angel (or whatever she is) Naomi (Amanda Tapping) has him reporting back to her, then wiping his mind of their encounters. Since Cass has no memory of being told by Naomi that he can’t go back to Heaven, Cass thinks he’s afraid to see what he wrought there in his previous destructive phase.

Instead, Cass informs Sam and Dean (Jensen Ackles) that he wants to be a Hunter like them. The three head over to a town where a man’s heart literally burst out of his chest. Another man shortly thereafter steps onto thin air and stays there for about eight seconds – before plummeting to the ground like Wile E. Coyote realizing that he’s just run out of cliff.

The cause of this and other strange activity turns out to be Fred Jones (Mike Farrell), a one-time friend of John Winchester and fellow Hunter, now confined silent and immobile in a nursing home. Fred is telekinetic, and because he watches a steady diet of TV cartoons, he has the ability to make the real world cartoonish. Fred is being exploited by the director of the nursing home, who is looting the safety deposit boxes of other nursing home residents. Cass is able to get inside Fred’s mind – bringing Sam along for the ride – and gets the elderly man back to reality. When the nursing home director tries to shoot Dean, Fred makes the thief (who is already responsible for several deaths) shoot himself instead.

Fred is worried that eventually he will return to his confused state and inadvertently wreak more havoc. Cass again goes into Fred’s mind, “fixing” him so that he is now content inside his own mind. Unaware that he’s once again been summoned to Naomi’s office and told he can’t try to atone in Heaven, Cass says he wants to stay with Fred for a few more days and then he’ll see what he wants to do next.

Meanwhile, Sam reflects on his time with Amelia. Sam quasi-wins over Amelia’s suspicious, protective father, but then Amelia gets a phone call saying that her beloved, presumed-dead soldier husband Don is alive after all.

This last moment explains why Sam still has it in his head that a normal life could work (no word yet on how the heck he managed to avoid the kinds of demonic issues that typically plague him and Dean no matter what they want to do), though this particular attempt did not succeed. Amelia is likable – the show has done a good job of introducing a love interest with the character – and the set-up is plausible.

There is an affecting moment between Dean and Cass, with Cass explaining he’s afraid to return to Heaven because seeing what he’s done there may cause him to kill himself. Again, we know it’s really Naomi’s command keeping him Earthbound, but Cass believes what he’s saying, and his words and Dean’s reaction are telling. Guest star Farrell (aka B.J. Hunnicutt of M*A*S*H*) has a potent presence.

The cartoon gags feel a bit abstract until the confrontation between Dean and the nursing home director. At this point, having frying pans clobber people and guns that emit flags with the word “Bang!” instead of bullets are moderately amusing, but it would have helped if the episode built toward this, instead of vacillating between grimness and modest chuckles. It seems like the intent was to swing between hilarity and real drama, but the laughs don’t match the angst, with the result that “Hunteri Heroici” feels a little lopsided-i.