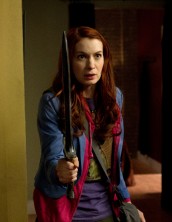 SUPERNATURAL has been criticized a time or two for its female characters. For that matter, it sometimes struggles with introducing any new good guys – we wait impatiently for one or more of the regulars to show up. “The Girl With the Dungeons and Dragons Tattoo” suggests what may have been wrong with previous efforts with such characters – they weren’t played by Felicia Day. Day, an Internet sensation for her Web series THE GUILD and veteran of working with Joss Whedon (BUFFY, DR. HORRIBLE’S SING-ALONG BLOG, DOLLHOUSE), turns out to be just what the Fates ordered when it comes to her turn as computer hacker genius Charlie Bradbury.

The hard drive is actually in the hands of human Richard Roman Enterprises employee Charlie, who has been tasked with decoding it. Dick actually recognizes there’s a spark of genius within her that cannot be absorbed should a Leviathan eat her, so Charlie (presently unaware of the fact) is uncommonly safe.

However, when Charlie does decode the hard drive, she can’t resist peeking into the files and finds Frank’s notes about the Leviathan plan to turn humanity into an easy-to-control food source, complete with slaughterhouses. No sooner is Charlie freaked out by this than she sees a Leviathan take her supervisor’s form, then eat the unfortunate man.

When Charlie gets home, she is confronted by Sam and Dean. The ghost of Bobby (Jim Beaver) is with them. Sam and Dean explain what’s at stake. Charlie, being a fannish person of the highest order, knows that her heroine Hermione Grainger (of the HARRY POTTER series, for those readers who are less wide-ranging in their fandoms) would certainly go back in and hack into Dick Roman’s hard drive in order to save the world. She can do no less (though she does freeze up at first).

Sam and Dean, fearing that Bobby will develop vengeful ghost tendencies in the presence of Dick Roman, order him to stay behind. However, Bobby slips his flask into Charlie’s bag and goes along for the ride.

With Dean’s help, Charlie bluffs her way past the human guard barring Dick’s office door and is able to send the contents of his hard drive to theWinchesterbrothers. She also causes Dick and his minions to be late in picking up an important package from the airport – which in turn allows Sam and Dean to steal the package and substitute a bleach bomb, which goes off in Dick and Co.’s faces.

Dean and Sam are perplexed by the contents of this crucial package – it looks like a huge block of red clay. They go to rescue Charlie from the office, but Dick is onto her and has the building locked down. Dick confronts Charlie in the lobby, but Bobby gives into ghost rage and starts throwing Dick around like a rag doll. Dick isn’t quite sure what’s happening here but, apart from being deprived of his prey, actually seems to enjoy the notion of combating an unseen opponent.

Sam and Dean get Charlie out of the building and see her to the airport. This isn’t the first time she’s changed her identity, so she’s not too worried. She does ask the Winchesters to never contact her again.

Dick wants the block of red clay retrieved before the brothers figure out what it is and how it works, while Dean and Sam worry about the ramifications of Bobby manifesting as a vengeful ghost.

Leaving aside this last bit – if Bobby hadn’t flung Dick across the room repeatedly, Charlie would almost certainly be dead, something neither Sam nor Dean seems to consider – “The Girl With the Dungeons and Dragons Tattoo” is full of happy surprises.

Day, of course, is a fandom force of her own these days, but the position is well-earned. Her sunny, intelligent demeanor contrasts with but still fits easily into the SUPERNATURAL universe. The script by Robbie Thompson also makes Charlie a lesbian, which not only provides a healthy gay role model but allows the episode to leap right over the whole sexual issue (another area that the series frequently finds problematic).

SUPERNATURAL often plays with the tropes of fandom, sometimes knocking against the fourth wall. The can be amusing and sometimes even mind-boggling (“The French Mistake,” anyone?), but can also occasionally come off as a bit judgmental, even mocking. There’s nothing condescending here, just a straightforward “Go, team!” in the suggestion that love of ideals put forth in storytelling can make one a better person. It’s a nice, unconflicted nod to the possible motives of devoted viewers.

There’s also an inherent and fairly funny ongoing parody of THE GIRL WITH THE DRAGON TATTOO, with Charlie as the anti-Lisbeth Salander, chatty and cheerful and rocking out to “I’m Walkin’ on Sunshine,” yet still able to access any computer.

Stuart once again shines as the ebullient, confident monster Dick. “Girl” does suffer from somewhat sidelining our usual heroes, though there’s a scene of Dean coaching Charlie in how to flirt with the guard that is borderline hilarious, with Dean even more appalled than his quasi-puppet at his awareness of what should be said.

Overall, “Girl” is a great way of moving the plot forward – something has to happen with the Leviathans by the end of the season, now just two episodes away, and this paves the way for our boys to get the upper hand. It’s also a great example of how the right guest star can elevate the show instead of temporarily derailing it.