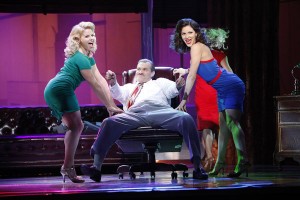 As SMASH nears next week’s Season 1 finale, one can’t help but scratch their head at how a once promising show sunk so low, so fast.

While I still admit to being fascinated by a handful of characters and the backstage antics pertaining to the Broadway music itself, it’s the misguided decisions where the writers have forced their generally well-written characters to partake in that just strips the show of its original heart.

“Previews” finds the Marilyn Monroe biopic BOMBSHELL doing its previews in Boston as star Rebecca Duvall (Uma Thurman) proves to be an absolute bomb with every musical number she’s in  — and the ending is a disaster since it ends with Monroe’s suicide.

Then Duvall has an allergic reaction to a smoothie which she uses as an excuse to bolt from the show – leaving the big mystery for next week of who will take her place: understudy Karen (Katharine McPhee) or previous Marilyn Ivy (Megan Hilty).

*  Derek (Jack Davenport) is sleeping with his star, which pisses off Ivy when she’s shunned.

* Ivy and Dev (Raza Jaffrey) end up sleeping together after getting drunk in the previous episode (WHAT!?!). Way to go in making Ivy look even worse than before.

* Dev and Karen reconcile, but not knowing that he slept with Ivy (didn’t this same sort of thing happen with Julia and her husband episodes ago?)

* Tom (Christian Odom, Jr.) and Julia are still having a spat when he allowed  Michael Swift (Will Chase) to come back to the show. And now Michael is boning for Julia all over again.

The episode concludes with everyone going to Church to find their faith. A bit too heavy-handed for me, but the ending indicates, with Karen on stage singing gospel, that she’s going to get the Marilyn part.

Eileen (Anjelica Huston) gets perhaps the best moment in the entire episode when she sings a song with a piano man that encapsulates the emotions of the episode.

Sustaining a musical-drama or musical-comedy is a very hard endeavor. Look at GLEE. It’s so easy to burn through story and emotional through song, that to fill in the gap silly subplots and annoying soap opera theatrics tend to be the easy way out.

I wish SMASH was a little wiser with its decisions, because systematically, one by one, I’ve come to despise just about every character on the show outside of Eileen and Tom. Not a good sign for a show that’s already committed to Season 2.

Here’s hoping next week redeems itself and sets up a template for where SMASH should go in order to redeem itself.