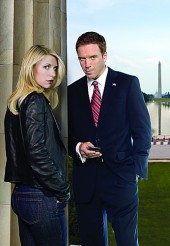 HOMELAND enters its second season with the high-class problem of having to live up the shadow cast by all the Emmy statuettes it picked up a week earlier for Best Drama, Best Actress in a Drama, Best Actor in a Drama, etc. Fortunately and unsurprisingly, Season 2 hits the ground running. The episode’s title, “The Smile,” refers to the look on the face of our heroine, Carrie (Claire Danes), when she returns to the field and kicks a man in a vulnerable area in order to escape. Her expression is up there with the Mona Lisa.

“The Smile” jumps ahead several months from the end of Season 1. Carrie is recovered from her shock therapy and is now teaching English as a second language courses, while Brody (Damien Lewis) is now a member of the United States Congress, something that delights his wife Jessica (Morena Baccarin) no end.

Saul (Mandy Patinkin), Carrie’s erstwhile CIA mentor, is in Beirut. When an informant wants to come in from the cold with news about an impending terrorist act, she’ll only talk to Carrie. This means the CIA has to bring back in the agent they so brutally discredited and kicked to the curb. Carrie is understandably reluctant to have anything to do with the Agency at this point, but Saul convinces her to do this one mission. Despite the arguments of her protective sister, Carrie goes to  Beirut. Carrie at first seems to be having trouble memorizing her cover identity, but things go forward. We see that Carrie has missed the urgency of being in the field and takes being back with both joy and skill.

Meanwhile, Brody is blackmailed into helping his old captor/comrade Nazir into stealing an encryption key that will enable Nazir to hitU.S.targets. Brody doesn’t want to harm innocents, but he’s in a vulnerable position. He winds up getting the information off the encryption key when Estes is lured away from his office.

At school, Brody and Jessica’s daughter Dana (Morgan Saylor) gets into an argument with a classmate who is spouting knee-jerk anti-Muslim statements in class. Dana loses her temper and says her father is a Muslim (which she knows to be true). Dana is taken to the principal’s office. When Brody gets home, Jessica is furious and wants him to do something about Dana. Dana, of course, is trying to backtrack and protect her father’s confidence, saying that she just spoke up to make a point. However, Brody defends Dana to Jessica and says it’s true. Jessica is shocked, uncomprehending, and even angrier than she was before. She starts wondering if, when Carrie accosted her and said Brody was a terrorist, the CIA agent might not have been crazy after all. Brody reminds Jessica that Carrie was discredited and fired.

It’s hard to argue with the Emmys for Danes or Lewis (or for HOMELAND overall, for that matter). Danes is at once transparent and mercurial as Carrie – we empathize with her but can’t anticipate her next move, a wonderful mixture. Lewis makes Brody real and sympathetic, no small feat when we saw him don a suicide vest last season and see him steal secrets that could kill Americans here. However, despite the character’s duplicity, Lewis finds a baseline honesty in Brody that is deeply affecting, especially when he’s defending Dana and responding quietly to Jessica’s reaction to his revelations.

A word here about Baccarin – she finds gradations and escalations in fury that are astonishing, even revelatory to watch. She is thoroughly angry at Dana, yet finds a whole new, more intense set of emotions when Brody acknowledges that he has converted to Islam. She’s very powerful and not a little frightening.

Writers/series creators Alex Gansa & Howard Gordon keep increasing the suspense while maintaining the human aspects of all the main characters, with director Michael Cuesta (who also helmed the pilot) keeping a sure hand on the proceedings, giving scenes a feature film emphasis and flair.

HOMELAND is intricate, but not so much so that new viewers won’t be able to catch on quickly, while the return audience will feel richly rewarded. It’s a great start to what gives every indication of being a second great season.

CD Review: ALIEN RESURRECTION
TRON: LEGACY is one of the Blu-ray and DVD Picks this week
AMERICAN IDOL Season 11 Recap: America Gets Brackensick of DeAndre, He...
TV Review: GO ON - Season 1 - “He Got Game, She Got Cats”